If you're a football fan, you've probably heard the name Just Fontaine before.

He's a pub quiz master's dream. The highest ever scorer at a single World Cup finals, Fontaine plundered 13 in six games for France at the 1958 tournament in Sweden, but was forced into retirement just four years later after persistent injury struggles.

Fontaine's name is always mentioned in the same breath as those 13 goals, and fairly so; it was a remarkable achievement and one which looks unlikely to ever be matched.

And yet, this brings with it a melancholy note. In little over a decade as a professional, Fontaine scored 259 goals in 283 club games, and 30 in 21 for France. Given the opportunity of a full career, we might not be talking about Just Fontaine the World Cup goal machine, but Just Fontaine, one of the finest forwards ever.

Early years in Casablanca and Nice

Born in Marrakech in 1933 to a French father and Spanish mother, Fontaine moved to Casablanca at an early age and began his footballing career there, with pre-independence Moroccan heavyweights USM Casablanca.

Three seasons in the red and black stripes of Casablanca brought 62 goals, and he was picked up by OGC Nice in 1953 after being watched by the then-French champions for around a year.

Small but powerful, Fontaine was fleet of foot and a clinical finisher, often racing past a line of defenders before incisively arrowing a finish into the bottom corner. 43 goals in his first 63 games was a fine return, and brought about the first major silverware of his career as he contributed to a Coupe de France win, one of only three in Nice's history.

His scintillating form on the riviera also earned him a first France call-up, and he was instantly at home on the international stage. A hat-trick on debut, in an 8-0 win against Luxembourg in qualifying for the 1954 World Cup, was just reward for his hard work - but his second and third caps did not come until 1956 and 1957. 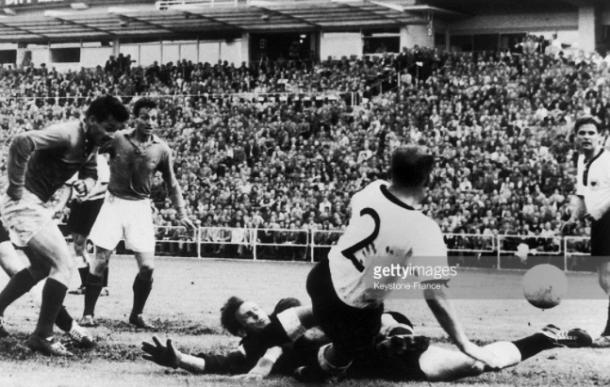 Stade Reims and the 1958 World Cup

By then, Fontaine had moved on from Nice. An injury-curtailed third season at the club meant they were happy to see him move on to Stade Reims.

Here he replaced the great French attacking midfielder Raymond Kopa, a man Fontaine would later describe as "like an elder brother" after their exploits together for the national side.

His injury apparently put to one side, the man affectionately known as 'Justo' continued where he had left off with 70 goals in his first two seasons, and the France manager Albert Batteux eventually had no other option but to call him up to the squad for the 1958 World Cup.

Here, Fontaine was at his best. "There was Piantoni [Roger Piantoni, a teammate at Reims], Kopa, Fontaine," the forward would later remember.

"A left footer, a dribbler, and a striker. We scored 25 goals in six games together. We were complimentary, we did not need anything else."

Six goals in the group stage

The opening game of France's tournament, against Paraguay, brought a hat-trick for Fontaine in a 7-3 win. Using his pace to round the goalkeeper for his first and streak through clear of the defence for his second, it was unselfish play from his attacking partners which left him with a tap-in for the hat-trick goal.

France lost the following game against Yugoslavia 3-2, but Fontaine was at the double with both of their goals.

A super low finish across the keeper and into the bottom-left corner was followed by a strong header at the near post, and he bagged his sixth of the tournament in a crucial 2-1 win over Scotland in the final group game, lashing a low cross into the top corner from near the penalty spot.

Northern Ireland awaited in the quarter-finals and Fontaine continued his superhuman form, scoring two more in a 4-0 drubbing.

For his first, he jinked in between two defenders before slamming the ball under the keeper, before bundling in a less impressive second through a crowd of players on the goal line.

He kept going in the semi-finals against Brazil, scoring after another fine piece of close control inside the penalty area but this game, like the rest of the tournament, would come to be remembered as part of the Pelé story as the teenager from another planet scored a hat-trick. Brazil won 5-2.

Likely still smarting from this defeat, Fontaine went off the rails in the third-placed play-off, pillaging four goals as France took bronze with a 6-3 win over West Germany. The sight of number 17 Fontaine, held aloft by his brother-in-arms Kopa, would become an iconic one for French football fans.

The end of the road

Spurred on by his new-found fame, Fontaine notched another 30 goals for Reims the following season. Then the wheels came off.

14 games in two seasons, the final one coming in July 1962, saw Fontaine eventually admit defeat in the fight against a long-term recurring injury at the age of just 28.

A British comparison might be the playing career of Brian Clough. Fontaine's club goals-per-game ratio of 0.92 is slightly higher but remarkably similar to Clough's 0.90 (though only one of Clough's goals came in the top flight) and neither was still playing on their 30th birthday.

But, while Old Big 'Ead went on to become a legendary figure of the game, Fontaine's managerial career was less colourful. He did manage France, PSG and Morocco, leading the latter to third at the 1980 African Cup of Nations, but he wasn't to truly relive the highs of his playing days.

Fontaine's story is not just one of interesting trivia but one of unfulfilled potential and an unknowable legacy.

That he was named as the best French player of the last 50 years by the French Football Federation in 2003, and as one of the best 125 living footballers by Pelé the following year, speaks volumes. Fontaine achieved all this in 12 years as a footballer - imagine what he could have done with 20.

This is part six of a regular feature series, "The A-Z of Forgotten Football Heroes". Check out last week's entry on Roy Essandoh, the Ceefax Cyberman, here.

Aston Villa vs Leeds United preview: Team News, Ones To Watch, Previous Meeting and Where To Watch 6 hours ago

Watford v Bournemouth preview: How to watch, kick-off time, team news, and ones to watch 4 hours ago

Rapid Wien vs Arsenal preview: How to watch, kick-off time, team news, predicted lineups and ones to watch 7 hours ago

The rise of Jannik Vestergaard for Southampton 9 hours ago

The Warmdown: City come from behind to beat Porto in Group C 6 hours ago
Restore your password
Please enter your user name or email.
Login Member or Writer Panel
Enjoy your own Customized Newspaperwith VAVEL topics' carousels!