Micky Mellon’s side knew this was a must win and started by far the better side. Tranmere Rovers first chance came inside five minutes after poor defending from AFC Wimbledon allowed Kieron Morris to hit a fine shot down the throat of keeper, Nathan Trott. Trott managed to tip the ball over the bar to prevent Rovers from taking the lead.

Just before the half hour mark, Rovers were rewarded for their relentless pressure thanks to Rushian Hepburn-Murphy’s goal. The initial free kick into the AFC Wimbledon box was met by Manny Monthe whose header found Conor Jennings.

Jennings proceeded to flick the ball over the head of the on-rushing defending and strike at goal, but his initial effort was saved by Trott. The save only went as far as Hepburn-Murphy who hit home for the Super Whites from inside the 6-yard-box.  The strikers goal was awarded by assistant referee, Alix Pashley after Wimbledon protested that the ball was not fully over the line.

Wimbledon came out after the interval a different side and showed the composure that they lacked in the first 45 minutes. Despite their initial pressure, Glyn Hodges' side failed to create any threating opportunities. Rovers managed to gain control after the hour mark but again, no real quality in front of goal. Hepburn-Murphy missed the best chance of the second half to double his and Rovers lead, failing to covert a one-on-one the 71st minute mark.

Rovers first half dominance was enough to secure all three points and creates a three-point gap between themselves and the relegation zone, with Tranmere having a game in hand on the teams around them. 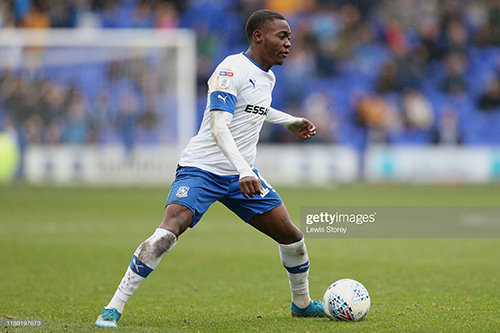 Despite their combined age of 74, David Perkins (37) and Neil Danns (37) completely ran the game, constantly pressurising the Wimbledon attackers. Their hunger to turn over play was one of thbe major factors in Rovers dominance. Their experience paired with Ferrier and Hepburn-Murphy’s youth showed a fine balance in Mellon’s selection.

Wimbledon’s back three of Rodney MacDonald, Terell Thomas and Luke O’Neil really struggled today, seemingly unable to cope with the pressure applied by Mellon’s side. Tranmere were constantly playing balls down the channel causing the Wimbledon defensive line to be regularly be out of shape.

Neil Danns (Tranmere): The former Bury man completely ran the show today was unlucky not to get on the score sheet himself. At one point in the game he managed to control a lofted ball on his chest, turn and spread the play out to the wing all while being surrounded by 3 Wimbledon midfielders. Micky Mellon will be counting on the Guyanese international in Rovers fight for survival this campaign.

Tranmere travel to 15th placed Burton Albion on Thursday, hoping to replicate the same score line they managed in the reverse fixture. Two 90th minute goals secured the three points for the Super Whites that time out, goals from Ollie Banks and Stefan Payne.

Wimbledon on the other hand, travel to promotion chasers, Bristol Rovers. Rovers ran out 3-1 winners the last time the two sides met at Kingsmeadow and a win on Thursday could  elevate them into the automatic spots in League 1.

Newcastle United vs Leeds United preview: How to watch, kick-off time, team news, predicted lineups and ones to watch 3 hours ago

The Warmdown: Liverpool open their Champions League campaign with a win against AC Milan 31 minutes ago

Opinion: Winless in six - but Hull City fans need to unite behind Grant McCann 21 hours ago

Charlie Patino: The next Arsenal youngster tipped to break into Mikel Arteta's first team 10 hours ago

Nottingham Forest: The issues plaguing a club to their worst start in 108 years a day ago

Leicester City vs Napoli Preview: Team news, predicted lineups, ones to watch and how to watch a day ago

Liverpool vs AC Milan preview: How to watch, kick-off time, predicted lineups, team news, officiating and ones to watch a day ago