The future of Crystal Palace remains hanging in the balance at the dawn of 2021; Roy Hodgson's future continues to be a subject of growing pertinence in south London.

Upon every passing game, the English manager extends his record of being the oldest manager to take charge of a Premier League team.

Hodgson, who is 74 years old in August, is slowly but surely closing the book on his managerial career, so a change at the wheel in the Eagles cockpit is inevitable.

His tenure at Selhurst Park has conjured ebb and flow. While his recent moments have been shrouded in scrutiny, there is no doubt he has had his fair share of achievements along the way.

The Eagles have accomplished a lot since the takeover of Steve Parish in 2010 and, in many ways, Hodgson completed the crowning achievement of the decade, administering stability to Palace's pledge for Premier League football.

To understand the complexity of Hodgson's task at hand, the context of Crystal Palace's turbulent start to the 2010s must be outlined.

In January 2010, Crystal Palace plummeted into administration, resulting in a 10-point deduction. The club was forced to sell key players such as Victor Moses and Jose Fonte, while Neil Warnock stepped down as manager.

Paul Hart took over as caretaker boss for the remaining weeks of the season, achieving Championship safety on the final day of the campaign after a memorable 2-2 draw at Sheffield Wednesday.

During the close of that season, CPFC 2010, a consortium consisting of several wealthy fans, successfully negotiated the purchase of the club. They were led by Steve Parish and they secured the freehold of Selhurst Park.

The team struggled in the 2010/11 season, as well as the season after that, finishing 20th and 17th respectively.

The Eagles fortunes started to soar upon the arrival of Ian Holloway as the first-team coach in November 2012, it would be he who would guide Palace back to the Premier League after an eight-year absence.

Holloway led his team to a 1-0 victory over Watford in the Championship play-off final at Wembley Stadium upon the conclusion of the 2013-14 season but resigned in October.

Following unsuccessful stints from Tony Pulis and Neil Warnock, Palace found the light at the end of the tunnel through the appointment of Alan Pardew.

In his first full season, Pardew led Palace to the 2016 FA Cup Final, their first for 26 years, losing 1–2 after extra-time to Manchester United.

In December 2016, Pardew was sacked and replaced by Sam Allardyce, who kept the club in the Premier League but resigned unexpectedly at the end of the season.

All of Palace's hard work to fight for survival year in and year out, while pursuing a stable future in the top flight, was undone at the expense of the decision to bring Frank De-Boer in.

Although it may be argued that Crystal Palace hasn't built on the foundations that the likes of Pardew had formed, Hodgson carved out the finishing touches of stability in his reign.

The Eagles started 2010 in disrepute, suffering on and off the pitch, but the Hodgson Era that started in 2017 ensured the south London club would maintain their solidity.

Lost in the midst of an ambitious outlook from Palace fans, it is often forgotten that Hodgson adopted a relegation-threatened squad, replacing frank De Boer, who had lost four consecutive league games without scoring a single goal.

Hodgson had taken over what seemed to be a Crystal Palace team entwined with disaster and destined for Championship football. His inauguration season at the helm of the Eagles gave the Englishman a mountain to climb.

In the face of adversity, Hodgson was able to garner a few accolades during his first season at Selhurst Park. Palace recorded their biggest ever win in the Premier League era with a 5-0 home win over champions, Leicester City.

Along with this, Crystal Palace became the first top-flight team, since Liverpool in the 1899-1900 season, to avoid relegation after losing their opening seven league fixtures.

These two accolades themselves emphasise Hodgson's instant impact to rejuvenate the squad morale and find the solution for survival. It wasn't a dream start for the former England international by any means, but his resilience reaped its rewards.

Despite losing his first three games in charge, a turnaround in form meant he led Crystal Palace to safety and an 11th-place finish in the league.

The inauguration season of Roy Hodgson signalled that the ownership of the club, under the guidance of Steve Parish, had finally found their safety net. It seemed as though the Eagles wouldn't have to face the anxiety of a relegation finish for a few seasons.

August 2018 marked the start of Hodgson's first full season in charge of the club, a campaign that would see the Eagles become feared by top six clubs while also breaking two club records along the way.

On December 22nd 2018, Hodgson became the first English manager to win away at The Etihad since 2010. It was also Palace's first triumph at Manchester City in 28 years.

A thunderous Townsend Volley, which became an early contender for goal of the season, was the difference-maker in Manchester. Crystal Palace had surprised everyone with the win, putting the champions to the sword, much like they did to Leicester the season before.

The victory was made all the more impressive by the fact Man City failed to lose another home fixture in the Premier League that season, clinching their second league title in two seasons.

To add to Hodgson's already impressive CV, his victory over Leicester in February 2019 crowned him the oldest manager to ever take charge of a Premier League team.

Later in the campaign, he steered his Crystal Palace side to their first-ever win at the Emirates Stadium, further injecting positivity among SE25.

Upon the culmination of the 2018/19 season, Crystal Palace finished in a safe 12th position in the Premier League, reaching the quarter-finals of the FA Cup.

Two club records were broken that season. Palace had scored a club record 51 goals in the Premier League season and finished with their highest points total in a 38-game season (49).

Hodgson made a clear improvement to the team that faced an uphill battle in the previous season, reaching a milestone and breaking two records along the way.

The Englishman had made a year on year improvement, but the scrutiny started to harvest when a third-year began without a clear leap in ambition.

The 2019/20 season betokened the start of Crystal Palace's seventh consecutive season in the top flight, something that would have been inconceivable earlier in the decade.

A season like no other, a season plagued by the pandemic, a season that exemplified Palace's Premier League permanence under Hodgson's helm.

A last-minute winner from Patrick Van Aanholt at Old Trafford became the microcosm of the Eagles' positive opening month in the league. The Dutchman's conversion is the only 90th-minute goal that Man United have conceded to lose a Premier League game at home.

In the calendar year of 2019, only Manchester City, Manchester United, Chelsea, Liverpool, and Leicester City finished with more wins than Hodgson's unambitious Eagles side.

Roy Hodgson's net spend is negative throughout his tenure at the south London club, but the Englishman has been able to overcome financial hardship to mould and craft a strong squad spine that has cemented a stable top-flight season year after year.

A 2-0 win over Bournemouth, in the later phases of the Premier League season, marked the first time Palace recorded four wins on the trot while maintaining a clean sheet in each triumph.

Another season had flown by without relegation fears, Hodgson continued to ride the wave of financial instability, keeping SE25 a stable Premier League participant.

In 2021, Roy Hodgson can often be seen carrying the weight of Palace fan's high expectations on his shoulders, as he trudges along the touchline, savouring his last remaining managerial moments.

Through all the finger-pointing, the inability to make additions he wants to the squad, his management days are dwindling, but his piety for Crystal Palace stands strong.

It would have been easy to move on, run away, retire. But Hodgson continues to make decisions that he adjudges to be correct for the future of Crystal Palace Football Club.

2020/21 should be remembered for the shrewd acquisitions of Nathaniel Clyne and Tyrick Mitchell or the future lynchpin, Eberechi Eze.

Ultimately, scrutiny has eclipsed what could be Hodgson's last season in football management. Crystal Palace are bearing down on a new era at the club, will Hodgson's achievement of stability, keeping the Eagles above the dropzone for three straight years, all come crashing down?

“We believe at Crystal Palace he has a big future” - Hodgson&nbsp;praises Rak-Sakyi for his step up to the first-team 3 days ago

Crystal Palace v Chelsea preview: How to watch, kick-off time, team news, predicted lineups and ones to watch 4 days ago

The warmdown:&nbsp;Batshuayi earns Palace a point against Everton 7 days ago

Why has Michy Batshuayi struggled at Crystal Palace this time around? 8 days ago

Alan Smith:&nbsp;“I loved all of my time at Palace" 17 days ago 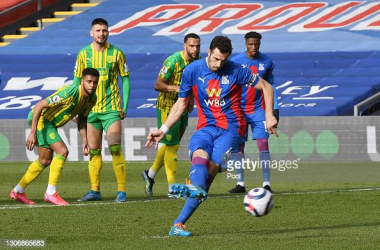 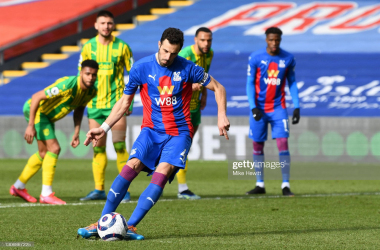 Crystal Palace 1-0 West Brom:&nbsp;Milivojevic’s&nbsp;penalty the difference as Palace squeeze past the Baggies a month ago
//