Hull City failed to score at home for a third successive game as they rarely tested the Ipswich Town defense. James Norwood scored the only goal of the game after 15 minutes, with Keane Lewis-Potter missing the best chance to score for the home side.

Hull got the game underway at a windy KCOM Stadium, with three changes for the hosts. Josh Emmanuel, Dan Crowley and Gavin Whyte came in for Lewie Coyle, Alfie Jones and Josh Magennis respectively. Ipswich Town were unchanged from the goalless draw at home to  Oxford United. The first five minutes saw both sides battle, but neither side were able to fashion an attempt on target.

Ipswich had the first real chance of the game after Callum Elder fouled James Norwood, but the resulting free kick was easily cleared by the home side. Norwood's deflected effort minutes later was the first real attempt on target and Matt Ingram gathered easily.

The strong wind wasn't helping either side as both were trying 40-yard passes that often ended up overrunning to the goalkeepers. That was until Myles Kenlock's long ball fell perfectly for Norwood, who lashed the ball past Ingram to give the away side the lead on 15 minutes. Ipswich hadn't win any of their previous 14 games against Hull but they started the better side and were rewarded with the lead.

Hull just couldn't seem to get going in the game, misplacing passes and struggling to keep possession. Troy Parrott really should have put Ipswich 2-0 up on 24 minutes, but hesitated and allowed Jacob Greaves to get the block in. Hull's first attempt on goal came just before the half hour mark, with patient build up play eventually seeing Crowley having a shot blocked. From the resulting corner, Andre Dozzell mis-kicked and Lewis-Potter somehow managed to put the ball wide from six yards out.

George Honeyman's error from a free kick almost saw Parrott fashion a chance for Norwood, but the on-loan Tottenham man's pass was overhit and Hull managed to clear their lines. Manager Grant McCann was visibly unhappy at the wasted opportunity that almost saw his side concede on the break. Wilks was brought down Aristote Nsiala with five minutes to go before half time, but the free kick by Elder was missed by Lewis-Potter and cleared by the Ipswich defense.

Hull had a penalty claim on the stroke of half time, trying to bundle his way through a crowd of bodies. The referee however, remained unmoved and the whistle for half time blew leaving the home side with it all to do in the second period.

Hull made a double substitution at half time, with Alfie Jones and Josh Magennis entering the fray for Crowley and Whyte respectively. Jones anchored the midfield with Greg Docherty allowed to go further forward, and they started much brighter. Lewis-Potter's shot was deflected behind for a corner on 50 minutes but the resulting set piece was cleared easily.

Hull struggled to fashion another chance and Keanan Bennetts went into the book for Ipswich for dissent, slamming the ball to the floor after he was penalized for a foul on Wilks. Jones gave away the ball to Norwood in midfield and he broke through the Hull backline, but put his shot wide on 63 minutes. He had a chance moments later from the edge of the area, but that went high and wide into the stand behind the goal.

Mallik Wilks has a rare opportunity with only 20 minutes to go but dragged his shot wide as it looked more and more likely that Hull would be kept scoreless after scoring eight goals in the last two games.

Keane Lewis-Potter was taken down with ten minutes remaining by Gwion Edwards, but the referee amazingly waved play on - much to the frustration of Grant McCann. Ipswich survived a late goalmouth scramble to take all three points.

Ipswich were very organized and didn't really give the home side any clear cut chances. After scoring eight in the last two games, Hull never really looked like scoring and Grant McCann cut a frustrated figure on the sideline.

James Norwood took his chance very well and could have scored three with better finishing. Keane Lewis-Potter had the best chance for Hull but somehow dragged wide from only six yards.

Myles Kenlock provided an outstanding assist for Norwood's goal, and the striker played well up front alongside Troy Parrott. For Hull, no-one shone after their previous excellent scoring record came to an abrupt end. Even after McCann brought on Jones and Magennis the home side never looked like scoring and that will be somewhat of a worry for the Northern Irishman going forward.

MK Dons vs Oxford United preview: How to watch, kick-off time, team news, predicted lineups and ones to watch 7 hours ago

Scunthorpe United vs Cheltenham Town preview: How to watch, kick-off time, team news, predicted lineups and ones to watch 9 hours ago 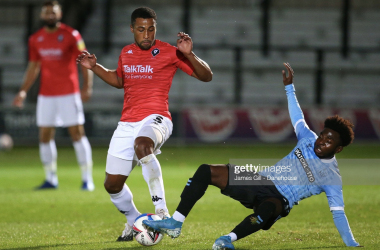 Southend United vs Salford City preview: How to watch, kick-off time, team news, predicted lineups and ones to watch&nbsp; 7 hours ago