Derby County extended the gap from the relegation zone to eight points as a goal early in each half was enough to see them past low- scoring Luton Town.

Goals from Lee Gregory and Graeme Shinnie from the penalty spot, ended a seven-game winless run for Wayne Rooney's side.

Nathan Jones' team were well in the game in the first-half, January signing Elijah Adebayo in particular, having a handful of clear-cut chances, but they could not capitalise.

Luton, the league’s lowest goalscorers on the road, were in search of a third win in a row for the first time this season and also a league double over the Rams, after beating them 2-1 in the reverse fixture.

The game started with the home side on the front foot as Louie Sibley tested Simon Sluga with two efforts early on, one from a narrow-angle inside the box, which forced a corner and a rasping volley straight at the Luton ‘keeper.

Martyn Waghorn’s re-introduction to the starting line up was one of Rooney's six changes going into the game, and he repaid his manager’s faith by setting up his strike partner Gregory's goal, his third for the Rams since arriving on loan in January.

Looking to respond quickly, Luton called upon their frontman Adebayo to find the answers. However, his header 12 minutes into the game bounced just wide of David Marshall’s right post.

All the early pressure was from Derby, who almost went two ahead when Tom Lawrence’s goal-bound header was cleared away.

Lawrence came into the side with a lot to prove, having not started a game since December in a season plagued with injuries and inconsistent performances in equal, but he, along with the rest of the Derby team, made a strong start.

Despite the strong start from the hosts, The Hatters should have been level when a quickly executed counter-attack gave Adebayo another chance to score from close range, but Marshall was equal to saving his shot with his legs.

Marshall was on top form again to deny the Luton skipper Glen Rea with just over 30 minutes on the clock, diving quickly to his left to push Rea’s header wide after he flicked on Kiernan Dewsbury-Hall’s cross.

The hosts held a slender lead going into the break, but they knew the three points were by no means secure in what was an end-to-end half of football – Adebayo having the pick of the chances for Luton to get that equaliser.

Waghorn was forced off just before half-time with another injury which would have been an unwanted sight for Rooney after just getting his man back from the treatment table.

The Rams got just the start they wanted after a nervy first-half as they were awarded a penalty barely five minutes into the second period, which Graeme Shinnie coolly dispatched to double Derby’s lead.

It was an equally quick start for Derby to the second-half, and Lawrence had an even better chance to score, denied by a heroic goal-line clearance with Luton reeling from the early setback.

Former Ram Tom Ince was brought on early into the half to inspire a comeback for Luton, who had only scored nine goals away from home going into the game and needed at least two to get anything from this one.

Dewsbury-Hall and Nathan Byrne came to blows. The latter held the former on the ground to stop him from joining a Luton attack. Dewsbury-Hall responded by kicking out at the Derby defender – the altercation ended with yellow cards for both players.

Overall, the second period was pretty comfortable for Derby, who deployed the low block and frustrated Luton, who toiled for a way back into the game but could not find it.

Injuries to forwards Waghorn and Gregory put a dampener on what was a great display for Derby.

Rooney will be hoping for no more injuries in that area of the pitch as they head into crunch-time of the Championship season.

Lawrence impressed on his return from injury and is likely to feature heavily towards the end of the season with Derby light in his area of the pitch.

Luton will rue missed chances in the first-half

Adebayo, in particular, will be disappointed with the game's outcome considering the chances that fell his way in the first-half.

Jones' side continue their goalscoring struggles on the road, and the Luton manager will know that the result could have easily been a lot different had they found that clinical edge.

He led the early charge for the Rams, which resulted in an early goal, and looked confident with the ball at his feet from minute one to 90.

He was subbed off on the hour mark, but it was another talismanic performance from the young attacking midfielder.

Creator of all of Luton's clear-cut chances in the game, the midfield maestro had an excellent game and was the main orchestrator throughout the match.

Most of his work came in the first-half as Luton struggled to get going after the break, although overall it was a decent display.

Huddersfield Town vs Stoke City: Championship Preview, Round 3, 2022 14 hours ago 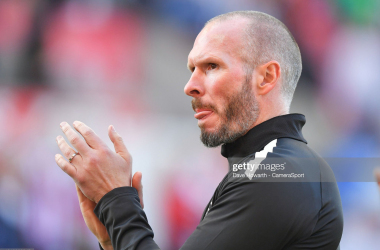 It is early days, but Blackburn Rovers are looking like contenders 3 days ago
//