Bruno Lage set out on his first venture as boss in charge of Wolverhampton Wanderers, as his side were beaten by Crewe Alexandra 1-0. Despite the result, there were some positives and the players gained valuable minutes to build their fitness.

Wolves travelled to Crewe Alexandra for their first game of the season and started in a 4-4-2 formation, welcoming Mexican Raúl Jimenez back into the team after eight months out with a fractured skull.

One goal separated the two sides as Christopher Long turned home a cross from close range just before the hour mark despite not having much of the ball throughout the game.

In the early stages, Lage's side started as they meant to go on as they dominated the ball, rarely giving Crewe a touch. Rayan Aït-Nouri was lively in the opening stages down the left hand side as he beat his man on several occasions and was Wolves' biggest threat in the first quarter of the game.

Despite not having much of the ball, the first chance of the game fell to Crewe as Charlie Kirk found space down the right hand side and whipped a ball across the face of the Wolves goal, but no one could get on the end of it to turn it home.

On the half hour mark, a cross from deep found it's way into the Wolves box which caused confusion between John Ruddy and Marçal who both left it, allowing a Crewe attacker to get a shot away from close range, but Ruddy was able to position himself well and make the recovery save.

Before departing early in the game, Jimenez struck a free kick from 30 yards out which struck the top of the crossbar after taking a deflection off the wall. The Mexican's removal from the game was pre-planned as not to overload his return to first team action and he was replaced by Patrick Cutrone.

The Italian, found himself with a brilliant opportunity just before the break as he was sent through one on one but ended up taking the shot on the stretch which meant that Richards in the Crewe net was able to get a strong hand to it and deny the opening goal.

Wolves made wholesale changes for the second half as eight new players were introduced, the majority of them being in the under 23 squad.

Crewe Alexandra took the lead on the 50 minute mark as a short corner wasn't picked up by the Wolves defenders and the Crewe attacker was able to dance into the Wolves box before sliding the ball to Long to turn home from close range.

Wolves struggled to get anything going after the goal as they seemed to run out of steam, which is understandable with this being the first game of the pre-season schedule.

Crewe came forward again as they capitalised on a mistake from the Owen Otasowie who was caught napping on the ball, but young Jack Scott threw himself in the way of the shot to keep Wolves in the game.

In the dying stages, Cutrone latched onto a loose ball on the edge of the box and he fired the ball goalwards on the turn which brought a very good save out of the Crewe goalkeeper down to his left.

Despite searching and moving the ball side to side, Wolves couldn't find anything in the game, which ended Crewe Alexandra 1-0 Wolverhampton Wanderers. Overall, a good run out for Bruno Lage's men but not the result they wanted at the start of the season.

Despite only playing half an hour on his return to first team action, Raúl Jimenez showed his class as he kept his side ticking and was the vital component to link the midfield and the attack.

He dropped deeper to collect the ball, which allowed Fabio Silva to spin in behind which caused Crewe lots of trouble. In just the 30 minutes that he played, Jimenez created numerous half chances and also hit the bar with a free kick from 30 yards out.

This performance was exactly what Wolves seemed to be missing last season, and it will leave the fans with lots of hope for the upcoming season when he gets back to full fitness.

Wolves must be at their best to defeat Norwich, insists Bruno Lage 4 days ago

Crewe 3-0 Wolves U21s: Young Wanderers knocked out by League One strugglers 21 days ago

Analysis: Progress is halted as Lage tastes defeat at Selhurst 22 days ago

Ait-Nouri can be a 'top player', says Wolves boss Lage 25 days ago 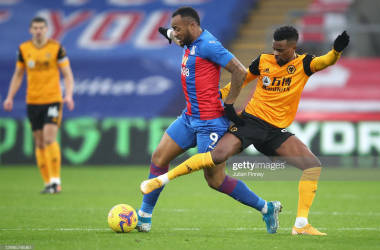 Crystal Palace Vs Wolverhampton Wanderers: How to watch, kick-off time, team news, predicted lineups and ones to watch 25 days ago
//