21.46: Sadly that's all we've got time for here on VAVEL UK! I've been Oliver Fisher, thank you for following, and see you next time! 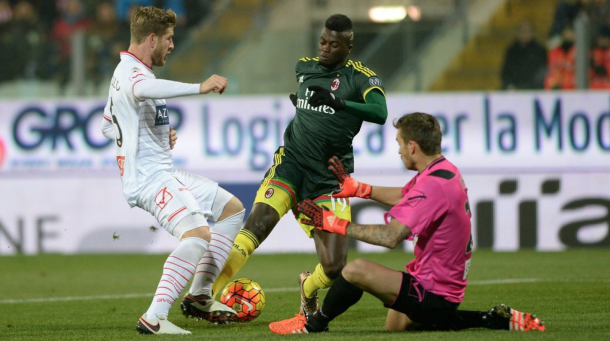 Niang tries to steal in on Belec. Image: acmilan.com

21.45: Finally, some stats for the night. Milan controlling the game with 61% possession, 12 total shots to 10 of Carpi, and 12 corners to two. The most important thing though is the scoreline, which reads 0-0.

21.42: The Rossoneri stay in eighth position, moving level on points with Atalanta but with a worse goal difference.

21.39: Two points dropped there for Milan who dominated but couldn't blow the Carpi house down. Good resiliance from the hosts it must be said who stay five points from safety.

90+3': That is a terrible decision by the referee. A foul on Luiz Adriano despite the fact it was he who was being held.

90': Three minutes added! Will there be a winner?

85': A huge goalmouth scramble! A corner is headed goalwards by Alex and is miraculously saved by Belec. Several follow ups including shots from Bonaventura and Kucka are blocked. Carpi somehow survive!

83': A poor clearance finds Bonaventura who hits it on the half volley but it skips off the outside of his boot for a goal kick.

80': Awful effort from Niang. Must have been at least 20 yards over.

79': Luiz Adriano fouled by Gagliolo near the edge of the box again. Another free kick chance.

77': Zaccardo whips a cross in that Mbakogu tries to overhead kick. Didn't quite time the jump.

75': Letizia with a superb block on a Niang cross, he had bodies to aim at but the danger snuffed out! Corner Milan...

75': Over the bar, never quite enough dip on the ball. Chance wasted.

74': Bonaventura chopped down just outside the edge of the area. Big chance here!

69': Cerci makes way for Luiz Adriano as Bonaventura hits a low free kick straight at the 'keeper from distance.

66': A beautiful turn by Bonaventura leaves Cofie behind before Niang scuffs an effort wide and over under a challenge.

63': Cerci cuts inside on his left foot, though he can't get any power as the effort rolls into Belec's arms.

62': Borriello stands up a cross that evades everyone. The home team getting back into the game here.

60': Donnarumma was off his line and Lasagna tries to take advantage but it ends up well wide.

58': Lasagna wins a free-kick that Di Gaudio wins a corner from.

52': Niang loose again and again his low cross is turned away for a corner kick! The away side turning the screw here!

51': Alex penalised for a foul on a Milan corner. Reprieve for the home side.

49': Gogliolo does well to turn a dangerous Niang cross from the byline away for a corner after Carpi applied the early pressure.

HT: The teams will be back out shortly. Who knows what kind of a second half we are due in for here.

HT: Stats suggest Milan have had around 57% of the possession, with both teams having five shots but Carpi leading with three on target to two.

HT: Mihajlovic will be encouraged by the last 20 minutes from his side, while Castori will be wondering what happened to the intensity Carpi started the game with.

HT: A great start from Carpi is met by resistance from Milan, who dominated the latter stages of the half. Some of the play from both teams has been good but the quality and intelligence is lacking, hence the 0-0 scoreline.

45+1': Panic as another Cerci free-kick from the right is bundled clear, and there goes the whistle!

45': Niang, who has been very dynamic, sends a low shot straight at Belec with the seconds winding down in this first half.

44': A missed chance for the men in green as Niang again leads a break. He spreads wide to Bacca who has somehow allowed himself to stray offside. That's poor.

41': Huge moment as Kevin Lasagna gets in behind and appeals for a penalty after going down! Nothing in the challenge from Alex though, a good decision!

39': This is better from the visitors as Montolivo becomes the latest player to shoot wide.

38': Kucka with good vision to try find Cerci's run in behind but he overhits the pass.

35': What a save! Niang finds space to shoot on the edge of the box and Belec just about tips it over! Great intensity to this game now.

35': Borrielo shanks a shot wide. Should have done better although it was on his weak foot.

34': Milan win the ball back and break through Bacca who didn't spot the run of Cerci soon enough. A let off for Carpi as the ball is away for a goal kick.

33': Niang heads a Cerci free-kick towards goal and Belec saves well. The offside flag was up though.

30': Great feet from Carlos Bacca as he almost wriggles free in the box! Carpi just about clear.

29': Just as I said that, Cerci is in behind and Belec does well to trap the ball behind for a corner.

28': Juraj Kucka misplaces a pass. The visitors have not got going at all.

24': Finally an effort for Milan as Niang strikes from about 20 yards, however he couldn't keep it down and it sails harmlessly for a goal kick. At the other end Lasagna has a weak shot saved.

21': Martin brings the ball down on the edge of the Milan box but can't quite get enough space to cross as he charged to the byline.

18': This game getting niggly now as Cofie clips Cerci late.

17': Cerci in yards of space inside the box but he can't bring it down cleanly! To make matters worse he clatters into Gagliolo.

14': Kevin Lasagne fouled by Alex and that is the first yellow of the game.

13': A great strike by Lollo as the ball sits up and Donnarumma parries away!

12': Lasagna is found with a ball over the top as Carpi look for the counter. Alex defends well however as the home side get an attacking throw.

10': Marco Borriello finds space on the left side of the box, yet he skews his half volley into the side netting.

8': More great play from Carpi as they continue to cause Milan problems. A cross by Borriello cleared only to Cofie on the edge of the box but his shot rolls into the arms of Donnarumma.

6': M'Baye Niang gets through on goal, but he was about three yards offside.

4': Good football from Carpi as a cross isn't cleared, but Pasciuti's follow up is blocked.

3': Scrappy here in the early stages with both teams struggling to get the ball down.

1': We are off! Carpi kicking towards the Milan ultras.

19.45: The teams are on the field in Modena! Carpi in all white, Milan wearing their green alternate shirts with the vibrant multicoloured shorts.

19.40: Around five minutes until the start here. A season defining game for both sides so early in the season with a bolster crowd to match. It promises to be a great one!

19.30: Results over the weekend have meant that both sides are limited in terms of table movement. A win for Carpi would keep them 19th but put them two points behind Frosinone, while Milan can move back to seventh with a win and perhaps even sixth if they win by four.

19:25: Both sides have kept two clean sheets in Serie A so far this campaign, though the home side have conceded an average of 1.93 goals per game to the visitors' 1.29.

19.23: A rarity in some ways as we have no previous matches between these two sides to recall. This is their first meeting, as expected given the polar opposite histories of the two clubs.

19.20: Tonight's referee is Massimiliano Irrati, an experienced Italian official. He last officiated in Torino's 1-0 loss at home to Inter on November 8th and has awarded just one red card in his last eight matches.

19.17: Due to a the sheer constraints of the squad at Carpi, they are only able to field seven out of a possible 13 substitutes. Milan, meanwhile, have quality at their disposal in the likes of Honda, Suso and Luiz Adriano. 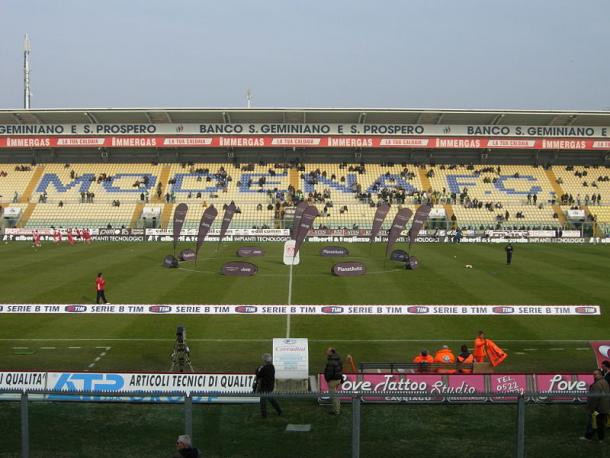 19.09: Tonight's venue is the Stadio Alberto Braglia in Modena. Home to Modena FC and, since the start of this season Carpi, it holds 21,151 spectators and also played host to Sassuolo between 2008-2013.

19.06: Both teams lining up as expected in 3-5-2 and 4-4-2 formations respectively. Ex-Milan player Cristian Zaccardo appears for the home side. It will be the battle of the Romagnoli's in central defence as Simone of Carpi meets Alessio of Milan. The two, however, are not related.

Carpi will be without Igor Bubnjic and Mattero Fedele for this one, while Diego Lopez, Jeremy Menez and Andrea Bertolacci are definitely missing for the visitors. Mario Balotelli is also very doubtful, while Luca Antonelli is touch-and-go.

Of course Milan have several threats in what is a much stronger side on paper. Carlos Bacca is the top scorer with six goals, while M'Baye Niang will be looking to continue from a dominant performance against Sampdoria.

The main threat for the home side will come from striker Marco Borriello. An experienced forward, he has three goals for Carpi this year making him the top scorer.

Mihajlovic admits that the work is not over, saying in the pre-match presser that "My players have to stay focused on our objectives. We will fight for a top-three finish, the season is long, so let's see how the next five matches go and then the second part of the season." 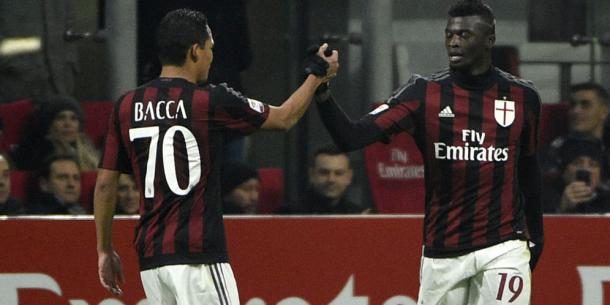 Bacca and Niang celebrate in the win over Sampdoria. Image: bola.net

The Rossoneri enter the game in high spirits. Sinisa Miahjlovic's men were awesome in their last game, recording a 4-1 win at home to Sampdoria thanks to goals from Giacomo Bonaventura, M'Baye Niang (2) and Luiz Adriano.

AC Milan enter this game still not really sure where their season is heading. They sit in seventh place in the table, with 23 points for the season, and bettering Sassuolo's result would see them move sixth.

The Biancorossi have won just one of their last seven league matches, losing five of them. They did however get a vital win in their last match away at Genoa, with second half goals from Marco Borriello and Cristian Zaccardo giving them a 2-1 win.

Carpi, the home side for tonight's match, are struggling with life in Serie A. They sit second bottom with just nine points from 14 games. Fabrizio Castori has only been in charge since September, and he has a real relegation battle on his hands as the club attempts to stay afloat in its first season in the top flight.

This promises to be a highly entertaining fixtures between two sides with contrasting ambitions in the 2015-16 season.

Hello and welcome to the Live commentary of tonight's Serie A match between Carpi and AC Milan here on VAVEL UK. I'm Oliver Fisher, and will be taking you through the evening's proceedings.