The first weekend of the 2. Bundesliga season ended with a thrilling draw between Fortuna Düsseldorf and Eintracht Braunschweig.

Both sides had and lost leads, Marcel Sobotta’s opening goal for the hosts cancelled out before the break by Joseph Baffo. Christoffer Nyman put Braunschweig on course with a controversial second, by Florian Neuhaus struck from the bench to ensure a share of the points.

Braunschweig are still in the 2. Bundesliga after losing their play-off against VfL Wolfsburg back in May. Traditionally the side that loses the ‘Relegation’ tie struggles the following season, and despite having the early run of play, the Lions got off to the worst possible start after just nine minutes here.

Niko Gießelmann, the one debutant starting for Düsseldorf after his move from SpVgg Greuther Fürth in the summer, put the ball into the box from the left. Newly-anointed Braunschweig skipper Ken Reichel didn’t have a clue what he was doing in attempted to clear the ball, allowed Sobottka to pounce and score his side’s first goal of the season.

Braunschweig looked to come back into the game, only for Michael Rensing to prove an obstacle. Domi Kumbela, Jan Hochscheidt and Salim Khelifi all came close but to be denied by one of the league’s best keepers. Düsseldorf had a chance to double their lead too, Ihlas Bebou unlocking Lukas Schmidt, but his effort was, by only a small margin, put over off the body of Gustav Valsvik.

Baffo would be the unlikely source of the eventual equaliser, after a free-kick routine that shouldn’t have come off, but did. Hochscheidt chipped the dead ball over the wall, aiming for Kumbela. He may or may not have made contact, but Rensing was there to block. His actions were insufficient though, with Baffo pouncing to bring the game level.

Baffo, like new team-mate Steve Breitkreuz, had banging on his head after an earlier clash off heads, in his case with Oliver Fink. The Düsseldorf man appeared to be feeling the effects of that, as he was taken off late in the first half, with Neuhaus on in his place.

Düsseldorf looked to regain their lead soon after half-time, with Sobottka winning a free-kick. Gießelmann took it, leaving many in the stadium think he had scored, but it was into the roof of the net. Braunschweig were showing more intent though, undeterred by the loss of an injured Kumbela early on. Boland went wide, Quirin Moll closer, with a Khelifi shot blocked.

Düsseldorf came even closer to score then. Gießelmann was impressing his new fans, and cut through the Braunschweig defence with a pass to Hennings. His shot was saved by Jasmin Fejzic, but he was just offside anyway with the linesman flagging. Braunschweig went down the other end, and scored. Some great one-touch football left Hendrick Zuck and Nyman clear, the latter setting the former, who looked offside, to complete the turnaround.

The game was completely opened up now. Rensing denied Braunschweig the chance to extend their lead, superbly saving Valsvik’s head from a Hochscheidt free-kick, before keeping out Nyman and Reichel chances. At the other end, substitute Emir Kujovic went wide within moments of appearing for the first time in a Düsseldorf shirt, whilst Bebou did likewise three times in five minutes.

After that quartet of misses, some brilliant football brought Düsseldorf level. The ball eventually came to Schmidt, who laid off to Neuhaus, with the youngster who’s on loan from Borussia Mönchengladbach slotting in, Fejzic wrong-footed in goal. It got even better for Düsseldorf moments later, as Neuhaus himself was fouled by Moll with studs up. He’d already been booked, with a second yellow the least he deserved.

Düsseldorf had the momentum and looked the far more likely to win it. Another new face in Havard Nielsen was deadly-accurate with a free-kick, with Fejzic doing well to keep it out. Baffo dealt with the follow-up from Neuhaus. Stoppage time passed without further incident, and both teams in the end would have been content with a point from this entertaining encounter.

Hertha Berlin vs Borussia Mönchengladbach &nbsp;preview: How to watch, kick-off time, team news, predicted lineups, and ones to watch a day ago

Werder Bremen vs RB Leipzig preview: How to watch, kick off time, team news, predicted lineups, and ones to watch a day ago

Jahn Regensburg vs Werder Bremen DFB-Pokal Quarter-Finals: How to watch, kick off time, team news, predicted lineups, and ones to watch 4 days ago

Stuttgart vs Werder Bremen preview: How to watch, kick-off time, team news, predicted lineups, and ones to watch 8 days ago

Bundesliga Matchday 27: Three things to look out for 8 days ago

Borussia Mönchengladbach vs SC Freiburg preview: How to watch, kick-off time, team news, predicted lineups, and ones to watch 8 days ago

Bayer Leverkusen vs&nbsp;Schalke 04 preview: How to watch, kick off time, team news, predicted lineups and ones to watch 9 days ago 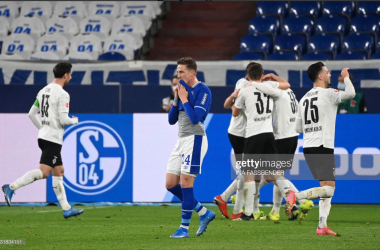