NOR1
END16 hours ago

From mere seconds away from winning the NWSL Championship to the bottom of the table, the Washington Spirit’s free fall from glory played out over the course of the 2017 season, beginning even before the team kicked off in week one.

Few who followed the Spirit’s offseason would have been surprised by the results this year, as the team management made numerous questionable moves, most notably shipping off captain and fan-favorite Ali Krieger to the Orlando Pride for a move up to second in the allocation order. Then in January, more of the Spirit’s core group was lost, as 2015 league MVP Crystal Dunn signed on with Chelsea Ladies FC and both Diana Matheson and Christine Nairn were dealt to the Seattle Reign.

Still, Washington’s opening day roster featured plenty of talent, including Stephanie Labbé, Shelina Zadorsky, and Joanna Lohman, all of whom were instrumental in the team’s playoff run in 2016. In addition, the Spirit’s moves up the distribution order helped secure the rights of 19-year-old phenom Mallory Pugh when she decided to leave UCLA and signed with the team in May. But ultimately, the ACL tear for Lohman in week one proved to be the first of many setbacks for the Spirit throughout the season, and the team finished the year in tenth place with just five wins and 19 points overall.

Despite starting the season with one win in the first two months, the Spirit had a good June, going unbeaten over three matches and defeating the eventual NWSL champion Portland Thorns on June 24. A 19th-minute goal by Francisca Ordega put Washington up 1-0 in front of more than 4,000 fans at the Maryland SoccerPlex, and the Spirit continued to pressure the Thorns’ goal throughout the first half. Portland was able to turn the possession around to its own favor in the second half, but the Washington defense and Labbé were able to keep the clean sheet. The 1-0 victory gave the Spirit a 3-5-2 record with three months of the season down, keeping an outside hope alive for a move up the table.

Washington’s long-shot playoff hopes were officially snuffed out in late August with a 2-1 home loss to the Chicago Red Stars. Chicago came into the game on a three-match losing streak, and the Red Stars were hungry for points in their hunt for a playoff spot. Kristie Mewis scored the opening goal against her former team in her first Red Stars match after being traded from the Spirit, but Washington was able to equalize in the 81st minute on a Cheyna Williams header. Unfortunately for the Spirit faithful, the Red Stars would get the goal back six minutes later, as forward Christen Press put away the game-winner on an assist from Julie Ertz. The loss officially eliminated Washington from playoff contention and from that point forward, it was something of a race to the bottom between the Spirit and the Boston Breakers. 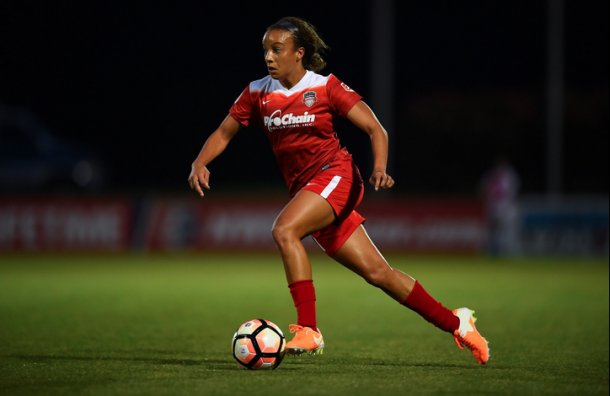 After scoring six goals in just 16 games, Pugh was an obvious candidate for NWSL Rookie of the Year honors, in addition to being named the Most Valuable Player by Spirit fans and media. The Colorado native made her presence in the league known immediately, helping the Spirit to a 2-0 win over the Houston Dash in her first appearance. The youngster showed the poise of a veteran late in games as well, scoring an equalizing penalty in the 90th minute of a 2-2 draw against Orlando and the game-winning goal in the September comeback win over Sky Blue FC. Coach Jim Gabarra and the Spirit will undoubtedly look to continue to build the team around Pugh in the coming seasons.

Player with an ‘off’ year

The 2017 season could be characterized as an off year for a good chunk of the remaining players from the 2016 campaign, but -- if you’ll allow us to take the phrase literally -- the absence of Lohman in the lineup was perhaps the most impactful for Washington. A colorful veteran of the midfield, Lohman was the remaining “spirit” of the team after the various offseason moves, and her injury was a big blow to both the morale and the offense. Beyond just her veteran presence, the team definitely missed her four goals from the previous season.

With better luck and the continued growth of its younger players, Washington could very well be back in the mix by next season. A number of rookies -- Pugh, Arielle Ship, Meggie Daugherty-Howard, Lindsay Agnew -- gained useful experience in the professional setting this season and should build on that experience in 2018 if they can stay healthy. In addition, the Spirit will have the number one pick in the upcoming college draft, and the smart money has Gabarra selecting Andi Sullivan out of Stanford University. Sullivan and Pugh have previously played together both on the U.S. full national team and youth teams, and the duo together on the field for the Spirit in 2018 could make Washington a force to be reckoned with.