Roberta Vinci, 2015 US Open runner-up and St Petersburg Ladies Trophy champion, made her top 10 debut today, bettering her previous career high of number 11 to number 10. Vinci had been so close to the top 10 numerous times before and as she has been playing probably her best tennis with having no points to defend, it was about time she would break in the worlds creme-de-la-creme.

2013 was undoubtedly the Italian's best season until this year. Vinci reached a career high of number eleven, was close to making it to the WTA Finals and won two WTA Titles in Palermo and Katowice. Also, she made the quarterfinal of the US Open and the round of 16 of the French Open and Wimbledon. However, still the Italian was left marginally out of top 10. In 2014, she had a huge fall, which continued in the first half of 2015 seeing her ranked almost out of the world's top 50.

The win that changed everything

The Italian had started playing well again during the US swing of 2015. Having made the quarterfinals in the Rogers Cup she entered the US Open where she took advantage of an open draw to make the semifinals, her first Grand Slam semifinal ever. Then, the legendary match happened. None gave her a chance. Who would imagine that the 32-year-old ranked world number 49 at that time Italian, who had been in a slump, would trouble the world number one and 21-time Grand Slam champion who was aiming for a Grand Slam in 2015. Yet it happened. Roberta Vinci of Italy was a Grand Slam finalist in the 2015 US Open. She would lose the final, but that did not mean anything. Her confidence was flying high and that was proven in the next months.

Next tournament was the Wuhan Open, the Italian made the semifinals beating a couple of big names including Petra Kvitova and even holding match point against eventual champion Venus Williams. The semifinals in Zhuhai came, losing again to Venus and leaving the bombshell that 2016 might be her last season on tour....

2016 started awesomely well for the 2015 US Open finalist. Making the quarterfinals in Brisbane and the third round of the Australian Open were pretty good results for her, who admitted that it is great as she never played well in Australia. Moving on to February, she would go on to win the Premier title in St Petersburg beating Belinda Bencic and Ana Ivanovic en route to her tenth and biggest career title. After some seed fall during Dubai, it was sealed. Roberta Vinci would finally be a member of the world's top ten, quite deservedly considering her latest results. 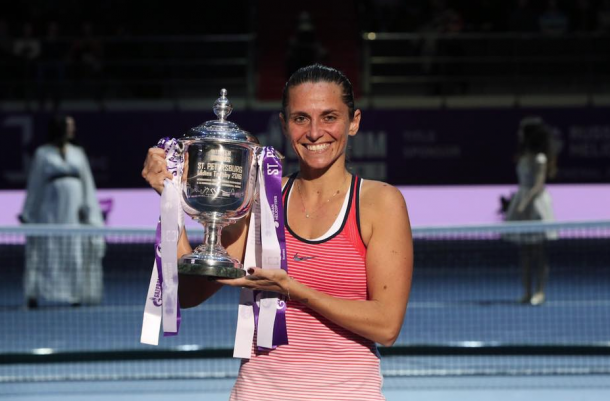 It is totally inspiring that Vinci is having a glorious second career and at her 32 years-old, when other players would have retired, she is playing her best. We are just allowed to applaud her performance.

Roberta Vinci is currently playing at the Qatar Total Open in Doha, a Premier 5 event, and she has just won today her first match as a top-tenner against Lesia Tsurenko in the first round. Tomorrow, she kicks off the action against young gun Daria Kasatkina on aed court, Court 1 in Doha.