Who would've thought that when Leicester City faced Manchester United it would be a clash between the top two Premier League sides? Well, that's exactly how big this weekend's game has turned out to be.

The magnitude of the game is also increased as Jamie Vardy will be hoping to break former-Devil Ruud Van Nistelrooy's scoring record.

Both teams have been deserving of their places in the table, but they have got there by playing very different styles. Leicester have been recognised as one of Europe's most entertaining teams, whilst United have been winning games by scoring the singular goal, staying confident that they'll keep a clean sheet.

Goals galore and a lack of goals

Leicester have been widely praised for their open, attacking playing style while their opponents, Man United, are being slated across the world for their lack of attacking intent and failure to score goals.

The Foxes are the league's highest scorers with 28, mostly down to the electric form of Riyad Mahrez and Vardy. However, they have conceded 20, the highest amount outside of the bottom six.

Their style is obviously a very effective way of playing though, as they are sitting very pretty at the top of the table and are capturing the hearts of Europe, playing the underdog role.

On the other side, United have been incredibly tight at the back, conceding only nine goals, less than half of the goals shipped by Leicester. This has been put down to the form of Louis van Gaal's solid defence and arguably the world's best goalkeeper, David De Gea.

The problem for the Red Devils comes in the final third in their struggle to find an out-and-out goalscorer. They've scored the joint-lowest amount of goals out of the top eight teams in the league with only 19, with Wayne Rooney's lack of goals and Anthony Martial's loss of his early season form possibly being the main factors.

This shows how the Premier League can compliment either playing style, by seeing both sides right at the top of the table.

However, as we have seen so far, the teams who play more attractive football receive more praise and gain the respect of teams around them. We've also seen that the stature of the club is important as Leicester clearly haven't been given the attention they deserve from their opponents, whilst United have seen teams change their style completely to adjust to the quality they possess in their squad.

Both sides see themselves in the middle of a great vein of form coming into this game, with only one loss from their last six games combined - that being United's 3-0 defeat away at Arsenal.

Leicester have only dropped two points, picking up 16 from a possible 18, with their only slight hiccup coming away at Southampton, where they came from two goals down to draw 2-2.

Many people are arguing that Leicester haven't actually played any of the top sides, except Arsenal (where they were beat 5-2), meaning many are not properly judging them until they have got through what looks like a very tough December. Playing three of last season's top four between now and the New Year, many people feel that the Foxes will struggle to maintain a top four spot, whilst the players are taking one game at a time.

Manchester United only have to play one of the top four of last term, Chelsea, whilst facing two of the three promoted sides, Norwich City and Bournemouth. This gives them a massive advantage over the East Midlands club, but Leicester haven't been fazed yet by the top flight and have accumulated the most Premier League points since the start of April.

If Claudio Ranieri's men do manage to overcome a very tough Christmas period, then they will certainly be considered as a threat to the title. No team that has been top after 13 games has ever finished outside of the top four, however, Leicester still aren't being thought of as a genuine challenger for the top prize.

It seems as though only Arsene Wenger believes they may push for the title right until the end of the season, as he admitted in his press conference this week.

However bad Man United have performed over recent seasons, they're never realistically far away from a chance at the title though and for the first time in a few seasons, they have had a decent start. If their good start is maintained then they will surely have a good go at winning the league as their main contenders either can't put together wins consistently or don't have the quality to beat the teams fighting at the top.

With both teams on a solid run of form, it should be a very close encounter. Neither team will want to give anything away early on, but be sure to see the game open up in the second half if the game's still deadlocked.

United's lack of attacking options should be cancelled out by a slightly shaky Leicester backline, whereas Leicester's fast-paced attack will probably be dealt with by a very strong United defence.

A goalless draw or a single-goal win is likely, while the chance of an eight goal spectacular like last season is very, very slim.

Leicester City vs Slavia Prague: Predicted line-ups a day ago

Leicester City vs Slavia Prague: Pre-Match Analysis a day ago

Leicester City vs Slavia Prague Preview:&nbsp;How to watch, kick-off time, team news, predicted lineups and ones to watch a day ago

Analysis: Will Luke Thomas&nbsp;seize his opportunity for&nbsp;Leicester City? 2 days ago 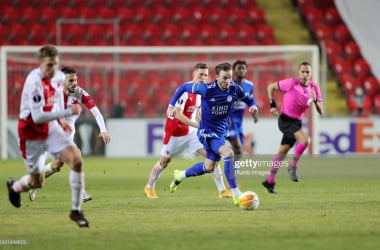 Aston Villa vs Leicester City Preview: How to watch, kick-off time, team news, predicted lineups and ones to watch 5 days ago
//