Arsenal finally came up with a win in the league, having only picked up two points in the previous three league fixtures. The 3-1 victory over Sunderland was not as one-sided as the scoreline suggests, with the visitors no longer looking like the poor side they were at the start of the season, and could have had many more goals in this game with the chances they created, had it not been for one man; goalkeeper Petr Čech.

Saving shots - and the game

For the better part of the first-half, Arsenal struggled as they were not allowed the creative freedom to play by their opponents - who often had nine men behind the ball. To increase effectiveness, they'd break clear on the counter attack whenever they won possession, but their half-chances were not taken to clinical effect.

Fabio Borini, in the fourth minute of the game, was played clean through and was one-on-one with Čech, but the veteran goalkeeper stood his ground and waited patiently to see where Borini would place his shot, before saving it comfortably. 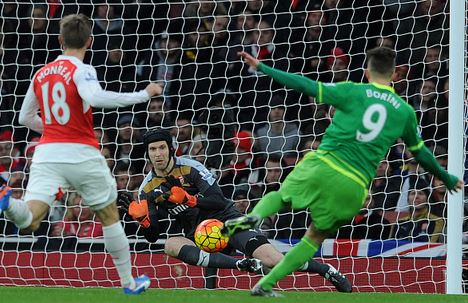 The next clear-cut opportunity in the game also went to Sunderland. Duncan Watmore picked up a long ball by the byline in the penalty area, where the ball bounced awkwardly and was eventually aimed towards his own goal by Mathieu Flamini, and appeared to be nestling in the bottom corner, were it not for some fantastic reactions and an incredible reach from Čech, ensuring the Gunners didn't concede the first goal.

Arsenal not conceding the first goal was vital to their success in this game, as even though they went into the half level at one apiece, Arsene Wenger and his side were assured that this game was not out of their reach, due to Čech's heroics in the first-half, which were only added to in the second half, with a fine goal-line save from point blank range to keep Arsenal level, and then shortly after taking the lead. He'd made not only impressive but important saves to keep the heads of Arsenal players up and thinking of going on to win the game.

Solidity between the sticks

Petr Čech was well reported as being the Gunners' only major signing of the summer from London rivals Chelsea, and has provided something lacking in the Arsenal team of late, a consistently reliable world-class goalkeeper. Before Čech claimed the number one spot, the place was contested last season between Colombian David Ospina, and Pole Wojciech Szczesny, with Ospina claiming the number one towards the end of the season and Szczesny being sent out on loan to Roma.

Whilst neither Ospina or Szczesny are bad goalkeepers, they are both prone to mistakes. Szczesny often suffers from rushes of blood which lead to him making poor decisions, whilst Ospina often makes very silly and preventable mistakes; dropping the ball behind the line against Olympiakos and saving a weak header after the ball had passed the line against Swansea last season. Petr Čech is not prone to mistakes thanks to his vast experience of Premier League football when he was the Chelsea first-choice 'keeper for ten seasons.

Arsenal have been without a top-class goalkeeper for several seasons now, the last one being Jens Lehmann and before him David Seaman, both club legends, and the 33-year-old has all the experience and the talent to go down as one of Arsenal's great goalkeepers. It is early days in the Czech's career at the Emirates, but the early signs and performances are promising from the £10million man.

Pablo Marí: The Placid Presence In Arsenal's Defence 6 days ago

Kieran Tierney: The positives of his return 13 days ago

Bellerin or Cédric: Who should Arteta's first choice be? 14 days ago