Liverpool's run of four consecutive wins was brought to an end on Sunday, as they suffered a frustrating 1-0 defeat at the hands of Newcastle United.

Following a lethargic first 70 minutes, Georginio Wijnaldum saw his shot deflect off Martin Skrtel and into the net, consigning Liverpool to a loss on an afternoon of little quality from either team.

Reds start quickly, but fail to trouble the Newcastle goal

Despite winning a corner after just 13 seconds, and two more in the opening minute, Liverpool failed to build on that in an opening period that lacked goalscoring opportunities.

It took over 20 minutes for the first real chance of the game to come along, one that Christian Benteke should have done much better with. With Dejan Lovren nodding Alberto Moreno's corner down into the six yard box, Benteke somehow flicked the ball over the crossbar from three yards out, with the goal gaping.

Jordon Ibe was looking threatening down the right wing, causing Paul Dummett many a problem with his direct running, but couldn't quite force an opening, largely due to Benteke's failure to make decisive moves in the penalty area.

Liverpool were looking fairly comfortable at the back despite their lethargic attacking, but did afford the hosts one decent opportunity towards the end of the first half. Not able to get through the Newcastle defence from an attack of their own, the home side countered to send Papiss Cisse one-on-one with Martin Skrtel, but the Slovakian defender did enough to break up the attack.

Unfortunately for the neutrals, the second half began in a similar way to how the first had gone. Wijnaldum and Joe Allen each dragged efforts wide, before the two managers looked to shake things up with substitutions.

On came Daniel Sturridge and Adam Lallana for Liverpool, replacing the disappointing Benteke and Firmino, whilst Newcastle switched Siem de Jong for Ayoze Perez, and it was they who took the lead soon after.

Wriggling free in the penalty area, Wijnaldum found room on the right hand side to get a shot away, one that flicked off the right knee of Martin Skrtel, leaving Simon Mignolet helpless as he watched the ball fly into the corner of the net. 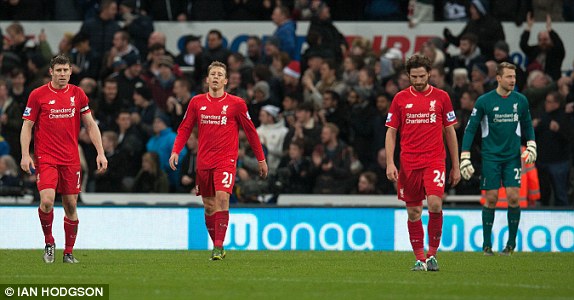 Despite having gone a goal behind, the Reds' subs had improved them going forward, even more so when Divock Origi entered the fray, with all three new men linking up to fashion their best chance of the game.

Liverpool unlucky in pursuit of equaliser

Origi dropped deep to win the ball in midfield, handing it to Lallana who spun and fed Sturridge through, but the Englishman could only strike wide with a first time effort on his weaker foot.

What proved even more frustrating, minutes later, was when Klopp's men had a goal wrongly ruled out for offside. James Milner's ball over the top had found Moreno, who volleyed the ball brilliantly over Rob Elliot, only to see the linesman raise his flag, with replays showing that Dummett had played the Spaniard onside.

Liverpool launched bodies forward in search of an equaliser, but couldn't find one, and were punished on the counter-attack as Newcastle doubled their lead in stoppage time.

Moussa Sissoko powered forward down the right hand side, slotting Wijnaldum in with a perfeclty timed pass that the Dutch international dinked over Mignolet, sending the home fans wild.

Dejected after their excellent run of form came to an end, Liverpool remain seventh in the Premier League, six points from the top four.

&nbsp;Liverpool's reaction is now key for the future 2 days ago

The Warm Down: Premier League embarrassment continues for Liverpool 4 days ago

The Warm Down: Liverpool triumph with a commanding win in Europe&nbsp; 8 days ago
//