It's that time of year again. Yes, Premier League football is finally back on the horizon, having been out of our lives for the last 3 months. During the gap, which was admirably pluged by one of the best World Cup's of our generation, each of the sides have gone through significant rebuilding periods - Rodgers adding depth to Liverpool's already star-studded squad after Luis Suarez's departure, while Koeman opted to sell a number of his star players to the likes of Liverpool for what may be deemed as exorbitant fees. Bearing this in mind, Sunday's clash should be feisty, with the Saints former stars looking to get one over on their previous employers.

Last season, each of the team's enjoyed what some deemed "over-achieving" campaigns, Liverpool finishing in the dizzy heights of 2nd place while Southampton secured a 9th place finish. Last season, Southampton beat Liverpool 1-0 at Anfield, while the Reds exerted revenge at St. Mary's, running out 3-0 winners. Since then, Rickie Lambert, Adam Lallana and Dejan Lovren have completed switches to the Merseyside club, and will be anxious to impress on what could be their competitive debuts for the side, even if only Lovren looks set to start. 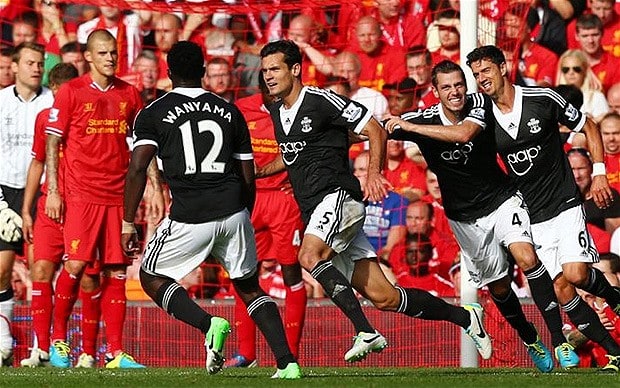 In recent times, this clash has been extremely tight. Since the turn of the decade, the sides have met 15 times, with Liverpool winning on 7 occasions, the sides sharing the spoils twice, and Southampton claiming all three points 6 times. So you could be forgiven for expecting a draw, even though there has been a clear winner from the last 11 clashes. Another interesting statistic that can be drawn from the history between the sides is that during the last 3 league campaigns that they have met, (2004/05, 2012/13 & 2013/14) the sides have won once each, while losing the other: Liverpool, Southampton, Liverpool, Southampton, Southampton, Liverpool. Each side will find it extremely important to get off to a good start, particularly Liverpool who hope to establish their title challenge during a tough opening month containing the Saints, Manchester City & Tottenham Hotspur.

The two teams have enjoyed relatively decent pre-season campaigns. You can read more about Liverpool's pre-season in a piece here by Charlie Malam (https://www.vavel.com/en/football/premier-league/liverpool-fc/378817-liverpool-a-2014-15-pre-season-round-up.html). Southampton have beaten two Championship sides, Bournemouth & Brighton Hove Albion, League One side Swindon Town, as well as disposing of lower league sides from Belgium and Netherlands, while succumbing to defeat against German side Bayer 04 Leverkusen.

Liverpool are expected to line-out in 4-2-3-1 formation. New signings Javier Manquillo, Dejan Lovren and Emre Can will be vying for starting berths, as well as Lazar Markovic should he recover sufficiently from his injury. Adam Lallana will miss out through injury, as well as Alberto Moreno, who, should he complete his move, will not be registered in time to participate.

Southampton will probably also look to line up in a 4-2-3-1 or perhaps a 4-2-2-2 depending on where new man Shane Long is deployed by Koeman. The new look Saints side will hope to gel immediately and cause a first day upset. Rebellious midfielder Morgan Schneiderlin is likely to miss out, while new signings Forster, Garbos, Bertrand, Pelle and Tadic will join Long in the new-look side.

Prediction: Liverpool 3-1 Southampton. The match should be tight as usual, but out wide, the battle between Sterling and Bertrand only looks like going one way. The game promises entertainent, and most importantly goals. On the other side, the Liverpool defence should be able to cope with the pace of Long and the physicality of Pelle with no real difficulty. This game looks like it's only going one way.

Jurgen Klopp Post-match comments: The result, Alisson heroics, and the battle for top four&nbsp; 2 months ago
//