Manchester United will look to make it two wins in a row when they host bitter rivals Leeds United in the Premier League this Sunday.

The two clubs have not played each other competitively since 2011 and have not met in the league since February 2004.

Depending on results elsewhere, a win here could see Ole Gunnar Solskjaer's side move up to second place with a game in hand.

Solskjaer has almost a full squad to choose from this weekend with no fresh injuries following the 3-2 win over Sheffield United. Edinson Cavani has missed the last three games with a muscle injury and although he is back in training, it is still uncertain as to whether or not he will feature in this game.

Defenders Marcos Rojo and Phil jones continue to be sidelined with injury, however, it would be unlikely that the pair would feature even if they were fit.

Over in the Leeds camp, central defender Diego Llorente is likely to be absent this weekend due to a muscular problem while first team players Adam Forshaw, Gaetano Berardi and Robin Koch will still be missing due to long-term injuries.

Paul Pogba has struggled for consistency since he signed for United four years ago, however, he showed the talent and quality he possesses against the Blades as he set up Anthony Martial his side's second goal of the game and produced a fantastic piece of skill before launching the attack that led to what would become the winning goal.

It will be interesting to see if Pogba can carry momentum into this game and produce another quality performance. He certainly has the ability, but whether or not he can do it consistently remains to be seen.

The danger man that could cause problems for Man United's shaky defence is Patrick Bamford. It was questioned if the 27-year old could perform in the Premier League and so far the striker has put those doubts to bed.

With nine goals in the league this season, Bamford has hit the ground running and will be keen to get on the scoresheet against his team's old rivals.

Both sides have a mixed bag in terms of results as of late and have each recorded two wins, two defeats and a draw in their last five games in all competitions.

The Red Devils have significantly better form in the league in that time with four wins and a draw as opposed to Leeds' two wins, two defeats and a draw.

The two last met competitively all the way back in 2011 in the League Cup when Man United came out on top with a 3-0 win.

The game will be shown live on Sky Sports and is set to kick off at 4:30PM. 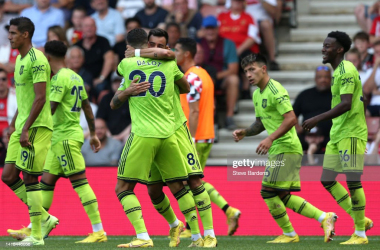