Karl Robinson returns to Stadium MK on Saturday, as he looks to take all three points from his former side in a bid to bridge the gap to the playoffs in League One.

The hosts scored nine goals in three successive wins prior to the midweek defeat against Shrewsbury Town, and will be looking to return to winning ways at the Yellows' expense.

Oxford United, on the other hand, have failed to score in their last three games. However, the visitors have only lost twice in their last 15 league games and will be confident in their ability to do the double over Russell Martin's side.

Matty Taylor could return to the starting lineup for Oxford, after he was rested in the midweek defeat to Portsmouth.

Former Chelsea youngster, Charlie Brown, could be awarded his first start for the Dons following his goal from the bench at New Meadow on Tuesday.

Will Grigg has found himself at home in Milton Keynes and has had no problems settling back in; the former Sunderland forward has already scored twice, and registered two assists since his return to the club.

Having scored in the defeat midweek, Grigg will be keen to add to his tally and ensure he is on the winning side this time against Oxford.

Following his omission from the starting eleven against Portsmouth, Taylor is likely to start against the Dons and will be at full fitness after his rest.

The former Bristol City striker has already netted on 11 occasions this term and has a knack for scoring against MK Dons; the forward scored a hat-trick against Saturday's hosts in his Bristol Rovers days, and scored in United's 3-2 win in the reverse fixture earlier this season.

Oxford United came out on top last time the two sides faced in October; a five-goal thriller that finished 3-2 at the Kassam Stadium.

The match is available to watch on iFollow through MK Dons or Oxford's respective club websites/apps, with match passes available at £10 for those across the United Kingdom.

VAVEL UK writers have their say on Mourinho's time at Spurs&nbsp; 5 hours ago

Birmingham City vs Nottingham Forest preview: How to watch, team news, kick-off time, predicted lineups and ones to watch 6 hours ago

Solskjaer: Two-goal Greenwood reaping rewards of 'hard work' and 'mixing up his game' a day ago 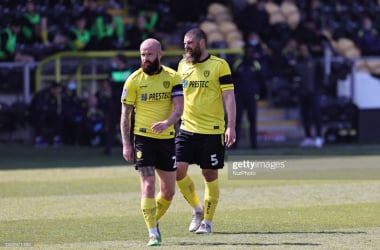 Burton Albion vs Lincoln City preview: How to watch, team news, predicted line ups and ones to watch 6 hours ago

Peterborough United vs Gillingham preview: How to watch, kick-off time, team news, predicted lineups and ones to watch 13 hours ago