Tranmere Rovers recorded yet another draw as they were held by Scunthorpe United at the Sands Venue Stadium.

Keith Hill's side were dominant throughout the majority of the tie but could not find a break through goal.

Scunthorpe occupy 18th position following the draw and are ten points from safety but with games in hand.

It was the hosts who were presented with the first real opportunity of the game, as Kevin van Veen won a free kick on the edge of the box. His effort was in turn fired into the Tranmere wall just five minutes in.

Kaiyne Woolery generated Tranmere's first half chance just minutes later, as he did well to control a long pass from Emmanuel Monthe but subsequently fired his effort over.

Woolery was again involved on 12, when he played a smart one-two with Ali Crawford on the edge of Scunthorpe's box, the striker turned well but shot wide of Rory Watson's goal.

Ali Crawford found space well and turned Jem Karacan on 20 minutes but again his effort sailed over the Scunthorpe bar.

Tranmere began to dictate proceedings before the half-time whistle, Otis Khan did well to produce a right footed cross down that was headed over by the late arriving MacDonald.

With the teams locked at 0-0 at the interval it remained all to play for in the second half as referee Andy Davies waived away an early penalty call on 50 minutes. Karacan tackled well and firmly on Woolery much to the despair of visiting technical area.

Rory Watson made a terrific save to deny Paul Lewis on fifty five minutes as Danny Lloyd's corner was met well with the score still goalless.

The hosts then began to dictate the tempo with 30 minutes to go, Liam Feeney provided good width and attacking threat down the left flank with his side searching for a go-ahead goal.

Khan turned provider once again as his right footed cross was controlled well by Paul Lewis as Watson was once again called into action to keep the tie level.

The hosts failed to muster many opportunities in the second period but defended well when called upon to prevent Tranmere snatching all three points late on.

Next up for Neil Cox's Scunthorpe is a visit to Morecambe on Tuesday evening.

Rovers travel to strugglers Walsall with their focus fully on returning to the third tier via the automatic promotion places.

Kaiyne Woolery was busy and a constant livewire for the visitors throughout the 90 minutes, especially during the first half. His endless running was a constant thorn in the Scunthorpe backline but the 26-year-old will certainly rue missed chances as his side once again failed to bridge the gap between themselves and the play-off positions.

Any protests should be civilised but fans must be heard, urges Solskjaer 20 hours ago

Has Bergwijn lived up to the hype? 13 hours ago

Championship survival race: All the permutations as Millers, Rams and Owls battle for Championship safety on the final day 20 hours ago

Luton Town 0-0 Rotherham United: Safety out of Millers' hands as they draw a blank against the Hatters 2 days ago

The Warmdown: City say 'Au Revoir' to PSG and 'Bonjour' to their first Champions League final a day ago 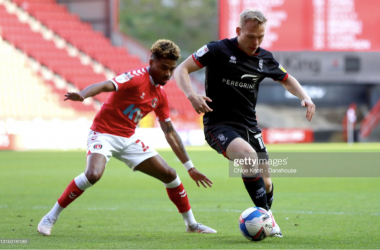 Sanchez: Brighton 'not going to relax' 2 days ago
//