Saints welcome Jurgen Klopp’s quadruple-chasing side to St Mary’s, with the Merseyside outfit knowing a win is needed to keep their Premier League title hopes alive.

And Hasenhuttl wants his side to play another hand in the title race, after picking up draws in both matches versus Manchester City this season.

Southampton will be looking to put in a performance after a run of picking up just five points from the last ten games, and were even booed off after losing 3-0 at Brentford last weekend.

'We have shown in the past that we can be committed...'

“I must say that we are, not under pressure because we are safe in the league, but we want to show we have a different face. This must be motivation enough for us”, he said.

“It is maybe the most difficult game at home, we have shown in the past that we can be committed to these games.

“I remember the games at home this season against the big clubs, against Tottenham when we were one man down, against Arsenal when we did a fantastic job, against Man City we have drawn, Man United we have drawn.

“We have shown that, together, we can achieve something very big. This is what we need Tuesday evening. They (the players) know what team they are facing, they know how tough it is, they know on what run of form they are. 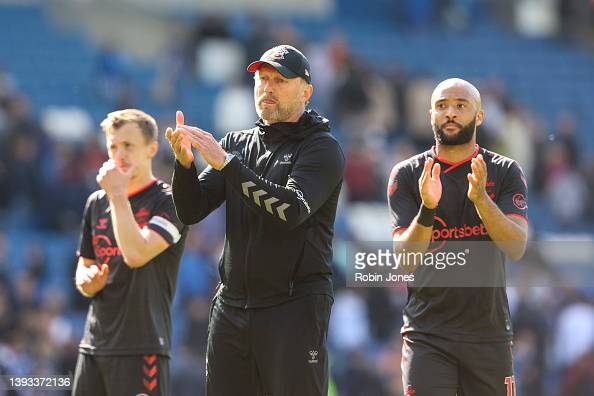 Hasenhuttl insists his side are 'not here to give out any presents' despite going into the game as huge underdogs against Klopp's FA Cup and Carabao Cup winners.

'It's up to us to show again we can be competitive...'

“It's fantastic for the Premier League to have such a close title race. Everyone is electrified from this battle. We are now part of this duel,” Hasenhuttl added.

“We have done our job against Man City, we took two points, they lost four points against us in the title race. Against Liverpool the first game we lost so now it's up to us to show again we can be competitive against a top team.

“For me it's one of the most difficult games to prepare for because of the flexibility of the opponent and the unbelievable offensive qualities they have,” the Austrian continued.

“There's not one way to say that's the way you can go. We tried many different ways. We have one win. The last game here at St Mary's we won, we played exceptionally well, especially the defence. This is what you definitely need, a fantastic defence but that's not enough.”

Despite the poor run of form that has seen Saints lose five of their last six home games - the 1-0 win over Arsenal the exception - Hasenhuttl remains content and insists his side have 'proved them wrong'.

The St Mary’s outfit were one of the favourites for demotion to the Championship following the summer transfer window, and the exit of talisman Danny Ings.

Ings was also joined out the door by other experienced seniors and such was the financial situation under former owner Gao Jisheng, Saints replaced them with youth.

'We have proved them wrong...'

Going on a remarkable run to climb as high as ninth in the table by the beginning of March, despite the poor end to the season Hasenhuttl declares survival a “big achievement”.

He commented: “The most pleasing thing for me is that before the season, we were very high on the betting list for relegation.

“After losing our best striker and a few other important players for a lot of money.

“We have proved them wrong with a very young team, willing to learn, to stay in the league with our limits we had as a club. Everybody can hang this as high as they want, I know what performances it was from us.

“This is the Premier League and we know it is tough to perform on the highest level for a consecutive time. I know what the young lads have done this season, and now we have to end up in a positive way.”

Broja bids farewell having &#39;loved every minute&#39; a month ago

Ward-Prowse nominated for Player of the Season 2 months ago

"I could change all eleven!": Key Ralph Hasenhuttl quotes from post-Burnley press-conference 2 months ago

Southampton vs Everton Preview: Form Guide, Ones to Watch, Head-to-Head, Team News, How to Watch 4 months ago

Manchester United vs Southampton preview: Form guide, ones to watch, team news, predicted line-ups, head-to-head and how to watch 5 months ago

'A new beginning' for Saints after ownership deal 6 months ago

Brighton equaliser &#39;hard to accept&#39; for Hasenhuttl 7 months ago