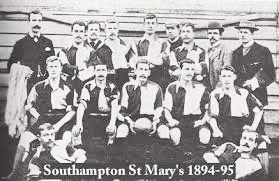 Southampton Football Club is an English football team located on the south coast of England. Managed by Austrian Ralph Hasenhuttl, they currently play in the Premier League and play their home games at St.Mary’s Stadium. Their nickname is the Saints.

The club was founded as St.Mary’s FC in November 1885 in consultation with the St.Mary’s Church of England Young Men’s Association. Their first ever match was a 5-1 win against Freemantle.

Saints made their first appearance in the FA Cup in the 1891/92 season, a campaign cut short by disqualification as they named two ineligible players in a 7-0 win over Reading. The club would soon become fully professional in 1894.

A first promotion to the First Division finally came in 1966 after numerous near misses. The club remained in the First Division for eight years, but fell victim to the new rule of relegating three teams in 1974. Two years later came the greatest day in the club’s history, as the Second Division side stunned Manchester United 1-0 at Wembley Stadium to lift a first FA Cup crown. 1978 saw a return to the top flight, and a year later Southampton went to Wembley again, but tasted defeat in the League Cup final; 3-2 against Brian Clough’s legendary Nottingham Forest team. Southampton enjoyed some of their best years in the 1980s, qualifying for Europe four times in five seasons at the beginning of the decade. This included a second placed league finish and FA Cup semi-final appearance in the 1983/84 season. Defeat against Everton was the first of three losses in cup semi-finals for the decade, the end of which saw the emergence of one Matthew Le Tissier, with his 24 goals in 1989/90 earning him the PFA Young Player of the Year award.

Following Le Tissier’s success, Alan Shearer came through the ranks at the beginning of the 1990s, but an English record £3 million bid from Blackburn Rovers prised him away on the eve of the inaugural Premier League season.

Saints bid farewell to The Dell at the end of the 2000/01 season with a memorable 3-2 win over Arsenal, courtesy of Le Tissier’s late winner. Gordon Strachan took over in October 2001 and led the team to great heights, with a club record eighth placed finish and an FA Cup runners-up medal in the 2002/03 season. This earned the side a place in the UEFA Cup in 2003/04, but they would fall in the first round to Steaua Bucharest. It quickly turned sour from there, though, as Harry Redknapp was appointed manager but could not save the side from relegation in 2004/05. Saints had the chance to gain promotion via the playoffs two seasons later but lost to Derby County in the semi-finals. Without the benefit of parachute payments, the club quickly fell into financial trouble and lost its place in the Championship in 2008, with a 10-point penalty to be enacted at the beginning of their 2009/10 season - their first in the third tier for nearly 50 years - as administration loomed. German businessman Markus Liebherr purchased the club in July 2009 as the club set about erasing the 10-point deficit. Signings of Rickie Lambert, Jason Puncheon and Jose Fonte propelled the club to seventh place, seven points adrift of the playoffs. After all the gloom surrounding the club, it was the Johnstone’s Paint Trophy final that really mattered for Saints that season. Goals from Lambert, Adam Lallana, Michail Antonio and Papa Waigo secured a first trophy in 34 years with a 4-1 win over Carlisle United. Liebherr would sadly pass away in August 2010, but Southampton carried on his legacy with new manager Nigel Adkins guiding the club to a double promotion and a return to the Premier League after a seven-year absence. Mauricio Pochettino took over halfway through the season, with famous wins against Liverpool, Manchester City and Chelsea guiding the team to safety. The Argentine broke the club’s transfer record twice in the summer of 2013, first bringing in Victor Wanyama and then Dani Osvaldo, as a mixture of international firepower, youth products and club stalwarts achieved the club’s best ever top flight points total of 56 - an eighth placed finish. Ronald Koeman carried on from Pochettino, and while everyone tipped the Saints to fail after losing a host of key players to top clubs, the Dutchman kept the team on an upwards trajectory. The next two seasons were record finishes for Saints with seventh and sixth place finishes in 2014/15 and 2015/16 respectively, earning the club a place in the Europa League once again. An agonising defeat in the 2017 League Cup final became a tipping point for the club, as Claude Puel, Mauricio Pellegrino and Mark Hughes failed to make their mark over the next 18 months. Ralph Hasenhuttl, who had taken RB Leipzig to second in the Bundesliga, was hired in December 2018 and has seen the club stabilise in mid-table.

St. Mary’s Stadium became Southampton’s home in 2001 when it was opened, replacing The Dell that had housed the Saints from the club’s early years. Holding over 32,000 fans, St. Mary’s is one of the newest stadiums in the top flight.

The first match played at the ground was a 4-3 friendly defeat for the hosts against Espanyol. The record attendance for a league game is 32,151 spectators when Saints lost 1-0 to Arsenal on December 29, 2003.

The stadium is all enclosed and is an all-seated venue. It also has undersoil heating for the winter and features state of the art lighting strips around the roof that facilitate growth of the surface.

Southampton’s youth academy is one of the most successful in English football, with esteemed graduates including Gareth Bale, Alex Oxlade-Chamberlain, Theo Walcott, Le Tissier and Lallana.

Always with an eye to the future, the likes of Michael Obafemi, Yan Valery and Will Smallbone look to be the next big thing on the south coast.