After last season's horrific home form that saw the Hornets lose eleven home games in a row, Watford's win against Sheffield United marked their first victory at home since November’s defeat of Manchester United in the Premier League.

Vicarage Road can be an intimidating place to come for opposition teams, and those two games demonstrated that, with fans in all four corners of the stadium carrying the players over the line to victory.

In this landmark year for the club, Watford’s home stadium will be vital in their pursuit for promotion from the Sky Bet Championship.

The win against Sheffield United allowed Watford to put their home demons to bed and put last season in the rearview mirror.

Of course, that is not to say the win was able to right the wrongs of last season, but it was an evening of joy – a rare commodity at Vicarage Road in recent years.

Psychologically, it was important for the players to put that home form behind them, and get over that stumbling mental block. Inevitably, the longer the home run endured, the more difficult it would be to resolve.

It became a chore for Watford fans to watch their team at home, which was reflected in the atmosphere and a drop off in attendance by the end of the season.

In an interview with WD18: The Watford fan channel, Watford Head Coach, Rob Edwards called for a “clean slate” this coming season, and to draw a line under the home form.

How important is home form in promotion?

For many years, a strong record at home has often correlated with a place in the automatic promotion spots.

In a sample of the last ten teams to finish in the top two promotion spots dating back to the 2017/18 season, teams on average have had to pick up a 63.7% win percentage rate at home if they are to secure their return back to the Premier League,: 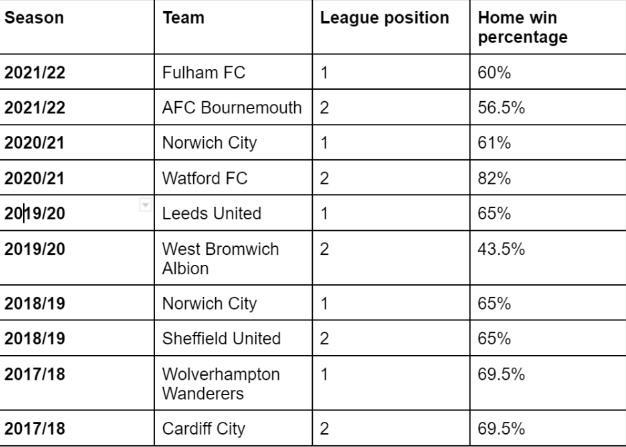 Whilst most of the teams find themselves in and around this 63.7% bracket, Watford’s promotion during the 2020/21 season saw them pick up an 82% win rate at home. This is the strongest home record from an automatically promoted side for quite some time, with the next best being Wolverhampton Wanderers and Cardiff City on 69.5% five years ago.

Without the expectations of fans, games behind closed doors during 2020/21 may have resulted in more relaxed performances and contributed to promotion but there is little doubt, home form influences promotion.

In the Premier League, Watford won only 10.5% of their home games, which led to their relegation. The quality of opposition in the top division may differ from the the Championship, but there is obviously a clear relationship between a good home record and positive outcomes.

If Watford are to get promoted again this season, they will need to replicate their form from the 2020/21 season and make Vicarage Road a fortress again.

Under the lights, the atmosphere of Vicarage Road comes into its own.

The victory over Sheffield United evidenced just this. Watford have a loyal group of fans capable of creating a cauldron of noise when the effort is reciprocated on the pitch. On Monday, the performance in the stands mirrored the attitude on the grass.

The players set the tone, and when fans see their heroes giving their all for the shirt, they will do everything possible from the stands to guide them to victory.

Home form and atmosphere will be vital for the Hornets this season, and if they are to go up, fans and players alike will have to work together.

The downfall of Gino Pozzo 4 months ago

Is it time for Watford fans to panic? 5 months ago

Preston North End 0-0 Watford: How did the Watford players rate at Deepdale? 6 months ago

Watford 1-0 Burnley: How did the Watford players rate at Vicarage Road? 6 months ago

The Rob revolution is underway, but still plenty of work to do at Watford 6 months ago

Watford 1-0 Sheffield United: How did the Watford players rate againt the Blades? 6 months ago

What might the future hold for Sarr and Dennis? 6 months ago

The importance of Hassane Kamara for Watford 6 months ago