In an exclusive interview given only to VAVEL, we were able to talk with Dayana Yastremska as she wraps up her first full season on the WTA Tour at the WTA Elite Trophy in Zhuhai.

Ranked 24th, the 19-year old has enjoyed a wildly successful 2019 season, winning titles in Hua Hin and Strasbourg while achieving several notable firsts, including her first top 10 win over Karolina Pliskova in Wuhan.

The Ukrainian has also defeated the likes of Caroline Wozniacki, Victoria Azarenka, Garbine Muguruza and Johanna Konta while also reaching the second week of a major for the first time at Wimbledon, making the Round of 16.

Yastremska looking to diversify game even more heading into 2020

We began the interview by asking Yastremska how her game has developed this season that led her to 35 match victories while being the youngest Ukrainian to win three career titles.

Q. What's been the biggest difference in your game this year that's allowed you to achieve such great goals?

YASTREMSKA: I think I was just trying to play all year with my kind of tennis and i've always been searching for what is my kind of tennis. I've tried to make my game more varied and I try to stay really aggressive and powerful, but I take huge experience from this year that I have to be more unpredictable on the court. I'm going to work in preseason on trying to be more stable and varied.

Teenager has always had "big dreams", sets goals "as high as possible"

The 19-year old is not lacking for confidence or belief as evidenced by her comeback from 5-2 down in the third set of the Hua Hin final against Ajla Tomljanovic and saving championship point against Caroline Garcia in the Strasbourg final.

Q: You have big expectations and goals for yourself. Where does that kind of inner confidence come from and what do you think you need to do to meet those goals?

YASTREMSKA: I think i've always had big dreams since i've been young and I know not all of them are coming true like you want it and not that fast, but I think there is always a right time for the right moments. I think you have to always put your goals as high as possible, dream big. It sounds really simple, but it's true.

About confidence, I think that I still don't know my limits, so i'm really just trying to search myself and get much better and perfect myself. 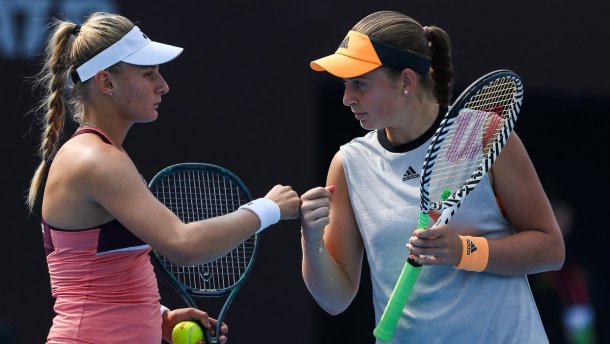 As the season went along, Yastremska started to show her ability at net, something that can be attributed to her doubles play. Just a couple of weeks ago, she reached the Beijing final with Jelena Ostapenko and the two plan to play more together in 2020.

Q. You played doubles with Aljona in Beijing and you guys reached the final. You beat top seeds Barbora Strycova and Su-wei Hsieh along the way. It was your first tournament playing together. What made you guys work so well together and what are your plans for the future?

YASTREMSKA: I think the first important thing is that we are friends. We support each other, we are very good at communication and I think it's really important when you play doubles you have to feel the person, you have to talk. I think we are both really energetic, really powerful on the court and we talk a lot about everything so we are not really stuck on the mistakes and we just enjoy.

We really work hard and had fun. I think we're gonna play more in the new season. I hope that we will manage some tournaments to play together. I really enjoyed it. It was really fun.

Yastremska talks about Henin's influence on her game

Eight-time major champion Justine Henin has been helping the three-time WTA titlist as a consultant since 2018 and Yastremska spoke about what specifically the Belgian has done to help her.

Q: You've trained at the Justine Henin Academy in Belgium. What's been the biggest influence she's had on your career? Is it more mental or physical?

YASTREMSKA: It's been a good time being there and big experience. I can say she gave me a really good part of mental discipline and in everything on court, off the court and that I think is the main goal she gave me because our tennis styles are completely different.

When I was practicing there, I wasn't really working on technical stuff. It was more about mental discipline and those kind of things.

Ukrainian star in the market for a new coach, discusses what she's looking for

The 19-year old ended her longtime coaching partnership with Olivier Jeunehomme before the Toray Pan Pacific in Osaka last month and is still searching for a coach that will continue to develop her brilliant game.

Q: You're without a coach right now. What is the biggest factor in picking a coach that best fits your game?

YASTREMSKA: I stopped working with Olivier before Asia. It wasn't easy to play all tournaments without coach, but it's good I had my parents with me, my father because he's with me since i'm young. It was good. He really helped me a lot.

About a coach, it's always difficult to find the right coach because it has to be not just the person who teach you on the court, it has to be also someone with who you spend all the time, all your time, so it has to be a good person. You really need to feel him. I can say I will have a really great team for the new season.

Yastremska opens up about being a role model for younger sister

We concluded the interview by discussing Yastremska's younger sister, Ivanka, who just recently began her professional career, reaching her first semifinal at a U-12 tournament over the summer in Spain.

Q: Your sister is playing tennis in U-12 tournaments. It was very close and you said she's very clever. What kind of a role model can you be for her? What's the biggest thing you feel you can help her with in terms of her game?

I want her to play some tournaments, Tennis Europe tournaments and then I want her to move to the ITF's as fast as possible and I think that if I will be doing good in the WTA, she will have much more opportunity to get faster to the WTA.

Of course, I am going to share my experience with her. I think that she can be a really good player and she's really working hard now. I don't know why she decided to be a professional tennis player as it's really hard work. We will see. I hope she will get there.