Nemanja Vidic and Rio Ferdinand both left Old Trafford in the summer of 2014 for pastures new.

Vidic had already announced in the January of 2014 that he would be leaving Old Trafford at the end of his contract in the summer. Stating that he would also be leaving the Premier League as he couldn’t see himself playing for another English team, he eventually left Old Trafford for Serie A and Inter Milan.

In Ferdinand’s case his future was uncertain right up till the end of the season, whether the club or Ferdinand decided it was time for Rio to move on, it doesn’t really matter.

Ferdinand wanted to carry on playing in the Premier League, eventually signing on with Harry Redknapp at Queens Park Rangers. In Redknapp he was signing for the manager that gave him his chance at West Ham and he was joining a club that both his cousin Les and his brother Anton had played for in the past.

How the partnership began

Ferdinand joined United in the summer of 2002 from Leeds United for a british transfer record at the time and became the world’s most expensive defender for a second time, the fee was said to be around £29million. Up until Vidic's arrival in January 2006, Ferdinand had numerous centre-back partners, Wes Brown, John O’Shea and Mikael Silvestre. Vidic arrived at Old Trafford from Russian side Spartak Moscow for a bargain price of £7million.

Vidic’s first partner at centre-back in his early days at Old Trafford was Wes Brown with Ferdinand was used in a midfield role as they searched for a replacement for Roy Keane.

Their first game as a pair in the centre of United’s defence came on 11th February 2006 in a 3-1 victory at Portsmouth and they would play together a further 8 times towards the end of the 2005/06 season.

Despite Vidic suffering a broken wrist that would delay his start to the season and a dislocated shoulder towards the end of the season, his partnership with Ferdinand began to flourish, as they were two of the first names on the team-sheet as United challenged for the Premier League title in 2006/07.

In their first full season playing together United won the Premier League title and reached the semi-finals of both the FA Cup and Champions League, with both players being named in the PFA Team of the Year. 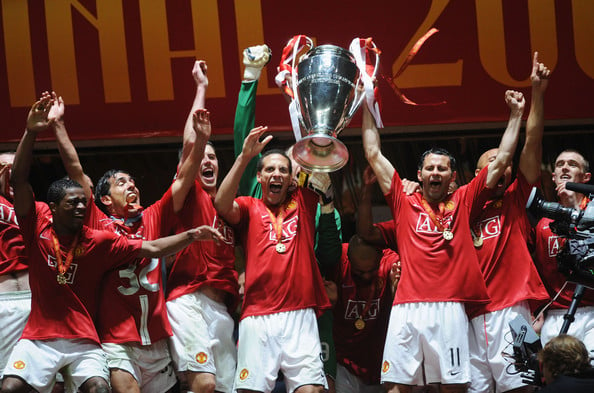 For two seasons from 2007 until 2009, Vidic and Ferdinand were the best central defensive partnership in Europe.

They started 41 games together as United retained the Premier League title reached the Champions League final for the first time in nine years.

The Champions League final was the first all English final in the competition as United faced Chelsea, who they had already beaten to the Premier League title, in Moscow.

With club captain Gary Neville out injured, Ferdinand was handed the captain’s armband on a regular basis. Along with Ryan Giggs, Ferdinand had the pleasure of lifting the Champions League trophy after United won the game on penalties, the game finishing 1-1 after extra-time.

The 2008/09 season once again saw Vidic and Ferdinand being an integral part of the United team. Another successful season for United and pair winning the Club World Cup in December. They also went on to win the League Cup and win the Premier League title for third successive season.

Their partnership was the classic central defensive combination. One tough guy and one ball playing defender. Vidic seen as the tough one, the enforcer if you like. Though he wasn’t just this, he could also play football and contribute crucial goals to the United cause.

Now Ferdinand may have been the ball playing half of the partnership but he wasn’t soft, he certainly knew how to look after himself on the pitch. This is what made the best of their generation, they weren’t one dimension players but knew what their strengths were.

Vidic and Ferdinand built up a superb understanding with United’s Dutch goalkeeper Edwin van der Sar. In the 2008/09 season they were all a part of the United defence that a world record 1,311 minutes in the league.

Partnership coming to an end

From the start of the 2009/10 season to the end of the 2013/14 season when both players left the club for their new adventures, their collective influence on the team was decreasing, as both players suffered with numerous injuries. In their last 5 seasons at the club, the pair only started 71 games together.

When David Moyes took over he seemed to be relying on the experience of the pair in his early games, as they and the team struggled under Moyes, he seemed reluctant to play the pair together, an indication of this when United played Bayern Munich in the quarter-finals of the Champions League. The tie in Munich saw Moyes opting to partner Chris Smalling at centre-back alongside Vidic.

Despite Moyes early reliance on the pair they only played 14 games together in their final season as Manchester United players.

The partnership of Nemanja Vidic and Rio Ferdinand won't be remembered just by the incredible stats and records broken.

No history book is needed for their legacy to stay alive, because those that watched them in 2007-2009 know the genius connection between the two, one that matches George Best to Bobby Charlton or Andres Iniesta to Xavi Hernandez.

Manchester United vs West Ham United: Things to look out for 21 hours ago

Manchester United vs West Ham United Preview: How to watch, kick off time, team news, predicted lineups and ones to watch 21 hours ago

Solskjaer's Manchester United continue to play the moments 3 days ago

Cristiano Ronaldo: The Portuguese's homecoming in a United shirt. What should we expect second time around? 3 days ago

A matchgoer's experience of Cristiano Ronaldo's homecoming 11 days ago