The third round of action in the SSE Women's FA Cup kicked off on Sunday with a set of exciting fixtures and a few cup upsets to add into the mix.

Brighton & Hove Albion reached the fourth round of the SSE Women's FA Cup with a 4-1 victory over AFC Wimbledon. The Seagulls progressed courtesy of first half goals from Ellie Dorey, Amy Taylor and a Sophie Perry penalty. Lucy Somes sealed the victory in the final ten minutes with the fourth goal of the match after Hannah Searle pulled a goal back for the hosts.

Interim manager George Parris included four new signings in his first starting line-up of 2017 - with goalkeeper Emma Byrne and the trio of Alessia Russo, Jenna Legg and Laura Rafferty all making their debuts for the club.

The home side made a lively start to the first half breaking from the kick-off, although, Katie Stanley's drilled effort flew well over the crossbar.

Brighton's quality began to show and the Women's Super League 2 side took the lead in the 29th minute. Taylor flicked on Kate Natkiel's cross from the right-hand side to set up Dorey with a clinical finish from close range.

Albion doubled their lead in the 40th minute through Taylor, who rushed onto Russo's delicately fed through ball to find the top corner with an impressive strike inside the box.

Perry put the Seagulls further ahead just before the break. The lively Natkiel was adjudged to have been brought down in the box and referee Mark Edwards called for the spot kick, which the Republic of Ireland international cooly slotted into the corner of Tash Salgado's goal.

The Dons began the comeback after the break and replied with a goal from substitute Searle in the 62nd minute. But, it turned out to be a consolation as Somes latched onto Rafferty's clearance to race into the box and slot past Salgado to seal the win for Brighton.

A resounding victory over Keynsham saw Durham Women progress to the fourth round in the first fixture of the weekend. A brace of goals from Sarah Mcfaddan and Zoe Ness, accompanied by strikes from Nat Gutteridge, Becky Salicki and Emily Roberts capped a fine performance for the Wildcats.

The Wildcats added a second only moments later as Keynsham's failed clearance following a free-kick allowed Mcfadden to smash home Durham's second and the defender took her second from the penalty spot after being set up by Ellie Christon soon after.

Durham continued the onslaught after the break with substitute Gutteridge heading home Ness's cross at the far post, before Salicki converted from a corner to add the fifth.

Ness' cross caught the Keynsham defence out six minutes later finding it's way into the host's net to grab a sixth and the final cherry on the cake came courtesy of the ever-present Roberts who sealed the seventh for the victors.

FA Women's Premier League South side Tottenham Hotspur, currently unbeaten at the top of the domestic table with nine wins and a draw in 10 league matches, faced a Blackburn Rovers team who are also in fine form possessing a record of 10 wins and a draw from 11 games in the FA WPL North.

The two teams played out a tight fought encounter on Sunday and only a fine performance from Bianca Baptiste could seperate the two sides.

Blackburn took an early lead in the seventh minute. Danielle Whitman made a charging run down the right side before delivering a teasing ball into the box which Ella Toon latched onto at the far post to break the deadlock.

Spurs fought back and replied through Baptiste in the 19th minute, Nikita Whinnett set up the forward who lobbed the Blackburn keeper to equalise for Tottenham.

Both teams pushed for the winner but it was Baptiste who delivered once again for Spurs in the fourth minute of injury time. The pacy striker connected with Wendy Martin's header before neatly cutting inside and unleashing an unstoppable drive into the top corner of Danielle Hill's goal.

Charlton Women exited the SSE Women's FA Cup at the third round after two defensive errors led to a defeat at the hands of WSL 2 side Sheffield United FC at Sporting Club Thamesmead on Sunday.

The Addicks put up a hard fought display against a team who play a division higher and had numerous chances throughout the match. However, a Sophie Jones header and a strike from Natasha Flint made certain that Sheffield would leave London with the spoils and a place in the fourth round.

West Bromwich Albion fought back from a goal down to beat Lewes Ladies 3-1 at the Rushall Olympic FC to book their place in the fourth round.

Danni Lane opened the scoring for Lewes before Trina Greaves netted a brace and Leigh Dugmore sealed the deal to ease past The Rooks and send Albion through to the next round of fixtures.

Only Megan Wynne's first half goal could seperate Millwall and London Bees in a close contest at Fisher FC.

The breakthrough came in the 11th minute for the Lionesses. A neat passage of play saw Amber Gayler released up the left flank before feeding the ball to Wynne - the midfielder's intial header was denied by keeper Sophie Harris at the first opportunity, but a goal mouth scramble saw the ball cross the line for a scrappy winner. 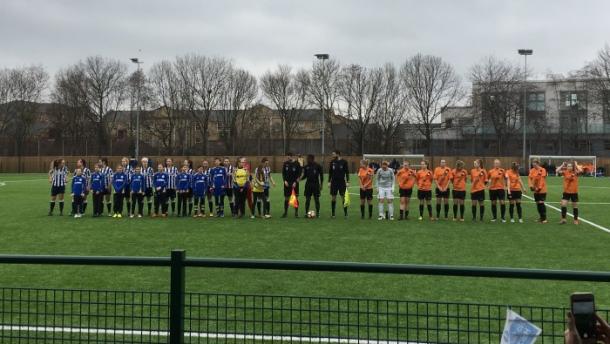 A 2-1 victory for Leicester City over Liverpool Marshalls Feds saw the Foxes progress into the fourth round of the Women's FA Cup.

The opener came in the 9th minute for Leicester as Katie Waddell played a great ball into Lauren Cartwright who raced through to slot past the keeper.

And, Sophie Domingo doubled the lead for her team in the 67th minute, as the ball bounced fortuitously for Domingo on the wing she got the better of the defender before unleashing a shot from 18 yards.

Liverpool Feds pulled a goal back in the 77th minute following two fine saves from Nessa Kinnerley from a corner, the keeper unfortunately couldn't deny the third and the feds player slotted home.

The WPL South side recorded a 2-0 victory following goals from Ali Hall five minutes in and a wonderful strike from Jade Formaston whih found the top corner in the 50th minute. Coventry's win caps a seventh consecutive victory and their 84th goal across all competitions.

Aston Villa Ladies progressed to the fourth round after a resounding 7-1 victory over Cambridge United Women at The Lamb.

The Claret and Blues opened the scoring in the 17th minute via defender Chloe Jones who glanced home a Villa free-kick.

Two goals in quick succession made it three for the hosts, with Beth Merrick's strike from distance and a Maddy Cusack goal closed out a dominating half for Villa.

Becky Taylor replied instantly after half-time giving the U's hope but it wasn't meant to be as Mollie Rouse netted two long range goals in as many minutes, before Alice Hasall and Chloe Dale converted to complete the scoring in the 70th minute.

Nottingham Forest Ladies knocked Derby County out of the Women's FA Cup with a 1-0 victory. Kelly Kennaugh connected with Annabel McKechnie's whipped in ball to score the solitary goal of the game and send the Reds into the next round.

A hat-trick from Claudia Walker, braces from both Simone Magill and debutant Olivia Chance and a strike from captain Michelle Hinnigan completed the scoring for The Toffees over the Women’s Premier League side.

However, Brighouse never gave up hope and got their reward in the 68th minute courtesy of a stunning 25-yard strike from captain Annabelle Cass, which beat Kirstie Levell in the visitors goal and denied the Everton keeper of a clean sheet.

A walkover was handed to Doncaster Rovers Belles after Watford Ladies withdrew from the competition.

Not reaching Champions League is 'personal failure', says Casey Stoney a day ago

Catarina Macario is showing early signs of brilliance. Can she become a world-class centre-forward?&nbsp; 3 days ago

Chelsea vs Reading Women's Super League preview: team news, predicted line-ups, ones to watch and how to watch 3 days ago

Brighton & Hove Albion Women vs Bristol City preview: team news, predicted line-ups, ones to watch and how to watch 3 days ago

Tottenham Women vs Chelsea Women's Super League preview: Team news, predicted line-ups, ones to watch and how to watch 3 days ago

Bristol City vs Manchester United Women's Super League preview: team news, predicted line-ups, ones to watch and how to watch 10 days ago
//