Arsenal ended their pre-season tour of the middle-east with a lacklustre 3-0 defeat against Chelsea in Beijing. In what was a comprehensive victory for Chelsea, it was very much the opposite for an Arsenal side that struggled massively in the tropical Beijing heat.

Two quick fire goals from Willian and Michy Batshuayi towards the end of the first half, saw Chelsea cruise in to a 2-0 half-time lead as Arsenal could not cope with the reigning Premier League champions flair and pace at times.

Batshuayi added his second and Chelsea’s third right at the start of the second half, in what was only the Champions' second pre-season game, though it didn't show.

It was a frantic opening five minutes in Beijing, given the circumstances of the shoddy pitch at the Birds Nest Stadium. Though it was Chelsea making all the openings as Arsenal were all over the place at the back. In the second minute Victor Moses was one of many Chelsea players in the first half to get in behind that Arsenal back three, but his shot was straight at David Ospina.

Moments later it was Willian this time who was clear through on goal, after an Ainsley Maitland-Niles mistake, though the Brazilian dragged his shot wide. It was incredibly evident that the itch playing real havoc for both teams, as neither side could string together a succession of passes on a patched up pitch in Beijing.

Just after the twenty minute mark, came Arsenal’s first real chance as Mesut Ozil picked out a fantastic pass for an on rushing Aaron Ramsey, but he couldn't quite get the connection he wanted and dragged the effort just wide. 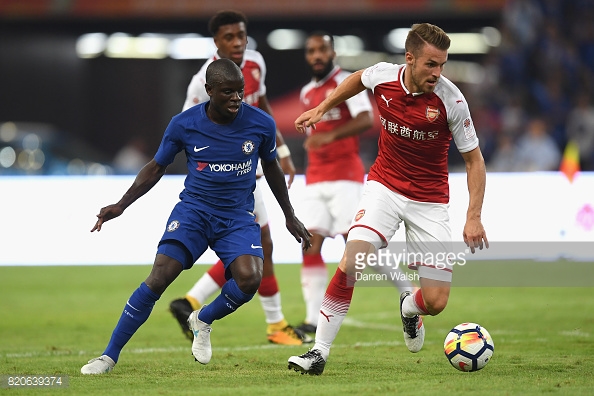 Moments later, Arsenal continued to look shaky at the back as Ospina came flying out of his goal as he tried to beat Pedro to a long ball over the top from Cesc Fabregas. Though the Colombian managed to get a good punch to the ball, he clattered Pedro in the process, leading to a rather longer than expected break in the game. As a result, Pedro could not continue so young Ivorian, Jeremie Boga came on in the Spanaird’s place.

The Chelsea dominate continued as Ospina was involved heavily again, producing a fantastic double save from Ospina, as Willian danced through the Arsenal defence and has his shot parried by Ospina, to then bounce up straight away and brilliantly deny Moses from range.

Chelsea were in complete control of this game, Arsenal had barely rationed a chance together since Ramsey’s opportunity. And five minutes before half-time, Chelsea finally made their dominance count. A wonderful finish from Willian as he cut inside from the left and worked a fantastic opening which he took beautifully, placing the ball in to the bottom right hand corner, in off the post, past the despairing Ospina. 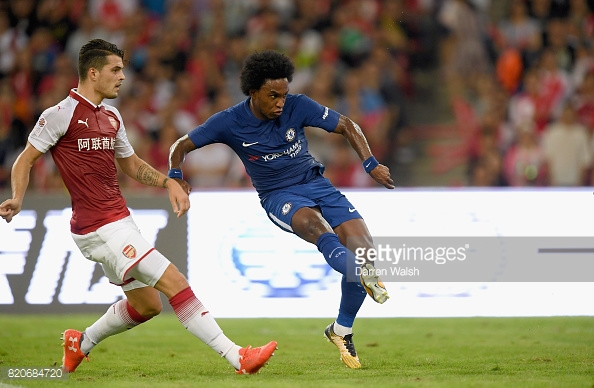 The game had barely restarted before Ospina was picking the ball out his net for a second time, as an error from young Cohen Bramall gifted Batshuayi possession from just outside the box, with the Belgium international curling the ball brilliantly in to the bottom left hand corner. Arsenal were all over the place.

In first half injury-time, another great chance again for Ramsey and Arsenal at the end of half, as a wonderful pass from Alex Oxlade-Chamberlain was met by the Welshman who volleyed straight at Thibaut Courtois. And that was the last act of an entertaining first-half as some sloppy defending from Arsenal had costed them dearly against a ruthless Chelsea.

Olivier Giroud, Francis Coquelin, Danny Welbeck, Mohamed Elneny, Sead Kolasniac and Laurent Koscielny all came on in place of Bramell, Per Mertesacker, Maitland-Niles, Nacho Monreal, Granit Xhaka and Alexandre Lacazette at the beginning of the second half. Whilst Chelsea just made the one change at half-time, as Willy Cabalero came on for Courtois.

First chance of the second half fell Arsenal’s way as a lovely ball from Chamberlain once more, was inches away from being met by Giroud. But then moments later, Chelsea were rampant again, as Marcos Alonso skipped easily past Chamberlain, then had the awareness to cut it back to Batshuayi on the edge of the box, who grabbed his second goal in some style, side-footing the ball accurately in to the top right-hand corner of Ospina’s net. Another moment for the Arsenal defence to forget. 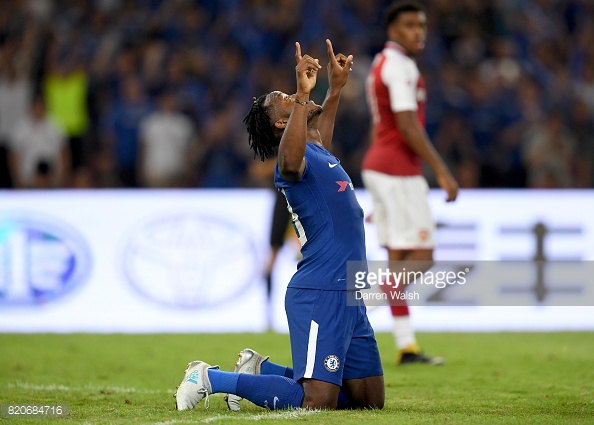 Arsenal still pushed for one back though as a flurry of chances came following Giroud’s free-kick just outside the penalty box which was blocked, the ball ran Ozil’s way who picked out Ramsey inside the box, put he completely missed the ball and the chance went astray, as Coquelin saw his shot from range narrowly go over the top of the bar.

With just under half hour to go, Chelsea still came pushing for more as Willian got in behind Arsenal’s backline again, only to be breached once more by the ever busy Ospina.

The game took another short break for yet another flurry of subs from both teams. Moments after those subs, Chelsea came again after a wonderful touch from substitute, young full-back Fikayo Tomori saw himself in one-on-one with Ospina, though once more the Colombian made another impressive stop.

As a result of all of the changes, the game very much lost its flow as the pre-season tempo begun to set in towards the final exchanges of the game. Young substitute Donyell Malen saw his effort come back off the post towards the end, but that was the best it would get for Arsenal.

Nether the less, Chelsea were brilliant on a horrendous Beijing pitch and this can still be seen as good preparation for Arsenal ahead of the upcoming season - though it’s evident that there is very much work to do for the Gunners both defensively and offensively as the return of the Premier League edges ever closer.

Opinion: Darwin Nunez could be the answer for Arsenal 9 hours ago

Mikel Arteta reflects on the Leicester City defeat a day ago

Rapid Wien vs Arsenal preview: How to watch, kick-off time, team news, predicted lineups and ones to watch 5 days ago
Restore your password
Please enter your user name or email.
Login Member or Writer Panel
Enjoy your own Customized Newspaperwith VAVEL topics' carousels!