Divock Origi believes that he is in “perfect” condition ahead of the new season after returning from a hamstring injury.

The 23-year-old had initially been ruled out of both games in the Audi Cup but he returned and came off the bench in the final against Atletico Madrid.

Origi won the penalty that allowed Liverpool to get back on terms with the Spanish side with Roberto Firmino slotting home from the spot, cancelling out Keidi Bare’s first half opener.

The striker spoke about the “small injury” to his hamstring but he told www.liverpoolfc.com that he “did everything” in order to get back as quickly as possible and felt “very good.”

“Fitness-wise I feel perfect and I think that helps me a lot on the pitch. I could make a lot of runs and put some volume in the team and that’s what I like, so it’s good.”

The final went to penalties but despite Origi scoring his spotkick, Liverpool lost 5-4 with captain Jordan Henderson the only man to miss in the shootout. However, the former Lille man believes it is key to remain positive “for the future” and “first game of the season.”

“It’s never fun to lose but of course we need to learn from this. I think overall from the pre-season until now we have had some very good moments and we can’t forget that.” 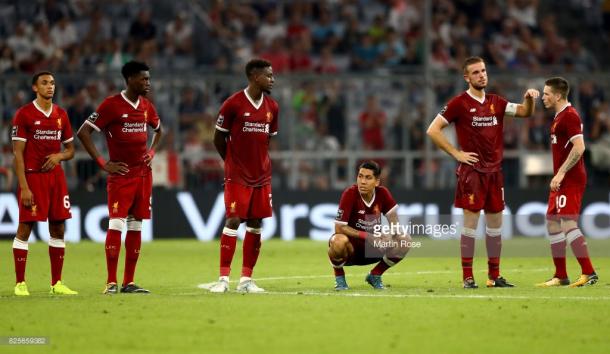 After a convincing 3-0 win over Hertha Berlin, Liverpool’s quality of opposition went up a notch in the Audi Cup.

German champions Bayern Munich were dispatched 3-0 before Liverpool’s game against Atletico Madrid provided Jürgen Klopp’s side with their sternest test so far.

Origi believes playing games against this type of opposition improves Liverpool’s preparation ahead of this season’s Champions League campaign providing they see off German side Hoffenheim in the play-off round.

Liverpool’s number 27 found playing against Diego Simeone’s men "interesting" and suggested that there were good and bad aspects from the game that the side “can improve” on.

“As a group, we just have to keep building on our fitness, keep analysing our games and keep learning from these moments. Special moments playing against Atletico, against Bayern - against top teams,” he said.

Liverpool’s wealth of attacking options means that the battle for a starting spot in Klopp’s side is tough but Origi believes “competition has always been healthy” and pushes him to work “harder.”

He added: “I’m sure I can be an important player this season.

“As a player you always have to be confident and every player has his own qualities so I can bring something to the team. If the manager wants to put me on, I’m ready.”

Manager, Klopp, wants his players to be versatile and have the ability to take up several positions during the game and that has been on display in pre-season so far.

Origi admitted that having the freedom “to express ourselves” by playing in Klopp’s system is “fun” and the fact that the squad is both “flexible” and “very talented” is important heading into the new season.

“As a striker, as well you can go on the wing, you can play up front, you can come into the midfield and the players will adapt which is only good for the start of the season.”

Liverpool complete signing of Calvin Ramsay from Aberdeen 10 days ago

Darwin Nunez: A new star on Merseyside? 13 days ago

Sadio Mane expected to leave Liverpool this summer a month ago

Liverpool vs Real Madrid: The Warmdown a month ago

Jurgen Klopp backs Sadio Mane to shine next season, even if his future is away from Anfield a month ago