Ross Barkley has dismissed rumours that he rejected a move to Chelsea during a medical.

The England international was believed to have blocked a potential transfer to the champions halfway through his medical examination on Deadline Day.

Shareholder Farhad Moshiri told Sky Sports that Everton had accepted a bid and the player had agreed terms with Chelsea.

Barkley has since taken to social media to explain that no medical took place and that he will assess his options once fully fit.

Ross Barkley’s supposed and surprising last-minute rejection of Chelsea was the story of the final day of the summer transfer window.

The 23-year-old was set on a move away from Goodison Park all summer after failing to sign a contract extension with his boyhood club.

After being on the verge of signing for Antonio Conte’s Chelsea, though, the move fell through in the 11th hour.

Barkley came out on Saturday afternoon to dismiss rumours of a last-minute change of heart, saying:

"Contrary to a number of reports in the press, I did not undertake a medical with any club at any point.

"I simply decided that due to my injury, it would be best to make a decision on my future and assess all my options in January when fully fit.

"Thanks for all of the support." 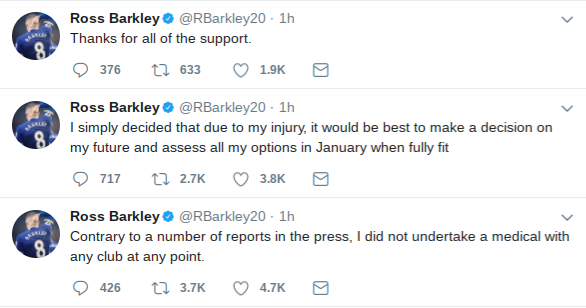 Ross Barkley sustained a hamstring injury earlier this year and is unlikely to play first-team football for another three months.

Not only will Everton be without the player's services for the remainder of 2017, but the club could be forced into accepting a lesser fee in January or letting him leave for free next summer.

Ronald Koeman brought in the likes of Wayne Rooney, Gylfi Sigurdsson and Davy Klaassen in the recent transfer window - all of whom play in a similar position to Barkley.

Barkley has made 150 Premier League appearances for Everton and has scored 21 goals since his debut in 2011.

Progress is being made by Everton and Lampard a month ago

Brief cameo offered glimpse of what Onana can bring, says Lampard a month ago

Amadou Onana: The Missing Piece of the Everton puzzle? 2 months ago

A new look Everton under Kevin Thelwell 2 months ago