For the first game in this round, KIF Örebro traveled up to the north of Sweden to face newcomers Umeå IK. The team from Närke chased their first victory of the season just like the hosts. That it was an Örebro team that had not yet won was evident during the first half.

The guests were the team that created the most but did not get any clear goal chances, with the first 45 minutes remaining goalless and Umeå also not able to break the deadlock.

After an opening half in which a plethora of goal opportunities remained unseen, a super chance arrived at the beginning of the second. The home team's Fanny Hjelm fired a shot from distance that seemed to be heading into the goal, but she was denied by the crossbar.

Just over ten minutes later, however, the game's first goal occurred - but it was the visitors from Örebro who scored it, with Karein Lundin skillfully netting from a free-kick.

Just over ten minutes from the final whistle, Örebro made it two when Lundin latched onto a pass from Heidi Kollanen and volleyed it into the back of the net.

After having to start on the bench in the first two games, Stina Blackstenius was in Göteborg's starting lineup in their game versus Växjö DFF.

It took only 17 minutes before the national team striker scored her first goal for her new team. After a foul by a Växjö defender, Blackstenius came free, rounded the goalkeeper, and put the ball into the net, making the score 1-0.

Before the end of the first half, Göteborg had extended their lead to 3-0 through two goals by Pauline Hammarlund.

In the second half, Göteborg continued to create chances, and in the 56th minute, Julia Zigiotti Olme made it four with a brilliant hit from a corner.

It was the Rosengård midfielders that dominated the match from the start. Hanna Bennison was a playmaker with a lot of won battles, and  Caroline Seger went for a bicycle kick but failed.

In the 24th minute, Sweden national team striker Loreta Kullashi found the net for the Visitors and cracked Zećira Mušović, and Rosengård's zero conceded goals this season. Kullashi scored for the third match in a row.

After the goal, the home team tried to bounce back, but without success. Corner kicks were easily taken care of by Eskilstuna's defence, and the half ended with the champions from Malmö on the back foot.

That pressure assembled for about seven minutes. Then a completely unmarked Malin Levenstad was careless with a back pass, and Zećira Mušović had to stretch out properly - and the corner was a fact.

After a corner from a failed back-pass, Vaila Barsley nodded the ball into the box, and it was headed into the goal by none other than Loreta Kullashi. The route back for Rosengård suddenly became longer, heavier, and harder. The momentum Rosengård had at the beginning of the half was exchanged for something that looked like stress and pressure.

They replaced national team striker Mimmi Larsson after just over an hour. However, the only national team player who could find the goal seemed to play for Eskilstuna.

Mimmi Larsson had the ball in the net for Rosengård, but the referee adjudged it to be offside.

Redemption for the hosts would come when captain Carolien Seger's header reached the back of the net, but they were not able to close the gap between themselves and Eskilstuna.

Linköping's FC winning streak continues. On Saturday, they picked up a third straight victory when they defeated Djurgården at home at Linköping Arena.

Djurgården came close to scoring already after 10 minutes as Linköping's defence lost control of the ball, letting it end up at Olivia Schough's feet, but she was denied by goalkeeper Matilda Haglund.

Linköping took the lead in the 16th minute with the only goal of the game. 23-year-old Nigerian striker Uchenna Grace Kanu appeared in Djurgården's penalty area on the far post and placed a volleyed finish behind Katherine Östergaard Larsen in the Djurgården's goal.

This victory means that Linköping now secure the first place in the table after winning three out of three games. Djurgården, on the other hand, continues to chase their first win. The Stockholm team have two losses and a draw in their first three games.

This game had barely started before Vittsjö took the lead. Michelle De Jongh picked up the ball the ball just outside the penalty area, advanced, and with a super strike shot, she put it 1-0.

Fifteen minutes after the first goal, Icelandic player Svava Rós Gudmundsdóttir stood in the right position and managed to get the equalizer for Kristianstad.

Vittsjö would, however, regain the lead. Clara Markstedt was played free, and she took advantage of that opportunity to make it 2-1.

Svava Rós Gudmundsdóttir was on fire in this match, and before the break, she equalized again.

However, just before the break, Vittsjö made it 3-2. Emma Pennsäter was first on a corner and gave her team the lead for the third time.

The second half did not start as Vittjö had wanted. After just over an hour played, Vittsjö striker Clara Markstedt was shown a red card, and Vittsjö had to end the game with ten players.

Vittsjö seemed to be able to hold out for a long time and pinch three points, but in the 87th minute of the match, Kristianstad's Therese Åslund scored the equaliser and made it 3-3. Kristianstad also had a golden opportunity to turn around and win the game with a penalty in the 97th minute of the match, but Therese Ivarsson failed to find the visitors a winning goal. 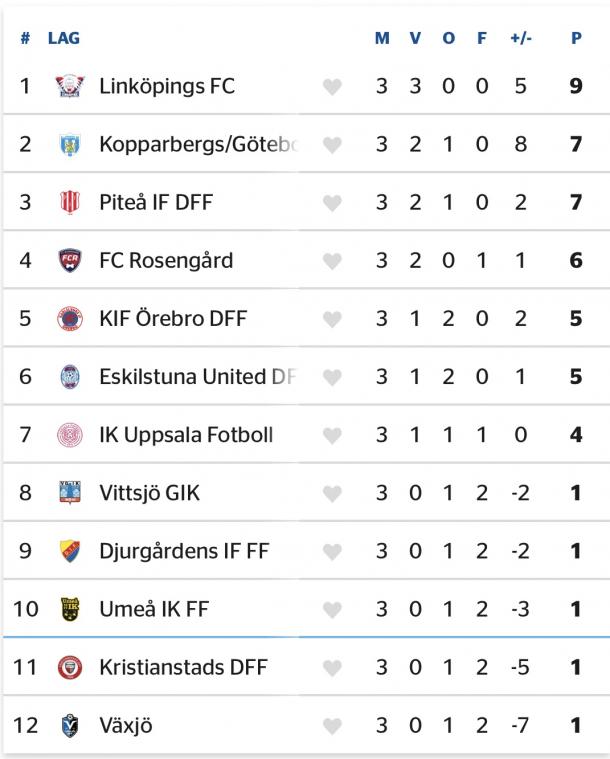 The Spanish Women's National Team Euro Squad: The Desire for Success but a Managerial Failure 2 months ago