Sheffield United manager Chris Wilder met the media ahead of the Blades trio to the AMEX Stadium to face Brighton & Hove Albion.

Among the topics discussed were his position at the club, recent performances, goalkeeper Aaron Ramsdale and the festive holiday fixture period as the Blades sit rock bottom of the Premier League.

On his position at the club

When asked if he would resign as manager of the Blades, Wilder said he would do what was best for the club.

"I'd only do that if I thought it was the right thing for Sheffield United, that's the only time I would do that. The club means far too much for it to be about me.

"It's about what happens for the club. Whether people above me are giving me support, and the decisions or whatever, I understand and respect that. I am working away.

"As you saw last night there's plenty of spirit in this group. If you make mistake and don't take the opportunities you get punished. But only if it's best for the football club. That's what I feel."

On the performance against Manchester United

After a lacklustre performance against Southampton, the Blades put up a much better effort, taking the lead before the Red Devils rallied and Wilder is encouraged despite the defeat at Old Trafford.

"They're not far off a win, all season that's been the case, but we've not got above the line. The Premier League is ridiculously tight at times. Last season we came out on top of a lot of tight games and got a healthy points total but this season we haven't.

"They're tight games a lot of them this season and I think a majority of opponents we've played would say we should be on more points than we are statistically, but stats don't win games. Sticking the ball in the net is the statistic I'm interested in.

On support from the owner

When asked about the support from club owner Prince Abdullah, who has said Wilder will not be sacked under any circumstances, he said he appreciates it.

"I talk with the owner and we're not happy with the results, of course, he isn't and I'm certainly not. I appreciate it and respect it, Prince Abdullah's comment. But my work and approach doesn't change here.

"We need to catch up on a lot of fronts. The prince knows that and I've expressed my views on that, from academy to infrastructure to facilities. We've talked about how many times we've been in the top flight the last 25, 50 years.

"Every club has a story and only the people inside know the story. There's been a manager (Slaven Bilic) and there will be a lot of talk about my position. A lot of that will be from people who don't know what they're talking about. The prince knows that story."

After the game against the Seagulls, Sheffield  United face Everton on Boxing Day, travel to Burnley three days later and host Crystal Palace on January 2 and Wilder knows the Blades must pick up points during this period.

"I think we must win a game before Christmas. The gap can't grow. Four games quick in succession - we have to take a healthy points total if we are going to give ourselves an opportunity of staying in the division.

"I'm going to go into the players and be positive with them. Overall it's going to be a tough Christmas period. The fixtures come in thick and fast. It's going to be a big period for all of us and hopefully i'm smiling come the end of it."

One player that has come under fire is goalkeeper Aaron Ramsdale, who conceded three goals for the second straight game in the loss to Manchester United.

"We talk to him and all the players. He's going through a tough period in his career but he's got to smile and battle his way through it.

"We signed him because we know what he's about. There's instant judgement in this world about how you are and you have to take the good with the bad.

"He has to do that, he's a good goalkeeper. We signed him for three years, not 13 games, we're not ripping his contract up. He wants to produce flawless performances and any slight mistakes get punished. He has to take the chin." 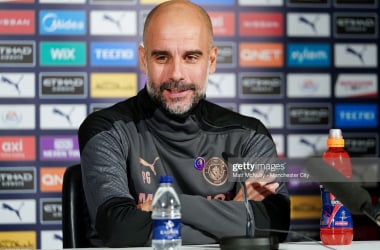 Loan Watch: What players could play a part in Frank Lampard's plans? 8 hours ago

The Warm Down: Gunners sink dire Magpies as pressure builds on Steve Brucea day ago