Saïd Benrahma's impressive strike against his former club was the difference as the Hammers beat the Bees in West London, another good run-out ahead of the Premier League opener against Newcastle on August 15.

West Ham were again without a number of key players, including Declan Rice who returns to training this week following his participation in the Euros, however the friendly still gave the boss an opportunity to assess his squad ahead of the upcoming campaign.

Speaking to whufc.com after the game, Moyes said:

"We knew it was a tough test today, so I was pleased with how we dealt with it. I think we were quite good in the first half. We did some good stuff and I'm pleased because we're not at full tilt but we're getting there.

"We saw this as being a really tough game - probably tougher, even, than the game last week at Celtic - and it proved to be, and I'm pleased we got a result. We don't get carried away by the results, of course. I want to build a better team, I want to help build a better club all round, and the way to do that is by winning. That gives us a chance and hopefully we can keep it going," added the boss.

"I'm delighted for Saïd scoring back here and we're hoping that's a sign of things to come. It was a good goal. He's been waiting on that one for a year, hasn't he? He practices it a lot and today he hit the target. Maybe it's fitting that he did it here."

"Overall there's been lots of things to be really pleased with this pre-season. I thought Conor Coventry played well today, we played Ben Johnson out of position, higher up as a wide-right today because we didn't have Jarrod, we didn't have Angelo," said the gaffer.

"We're having to look and see at what we might have to do at different times in the season and it gives me a chance to try one or two things out."

Moyes mentioned the performances of Conor Coventry and Ben Johnson in his interview, and the youngsters could well feature heavily as the East London outfit compete in four competitions this season.

While central midfielder Coventry and versatile defender Johnson, both 21, are not first-choice in their respective positions, they are likely to play a part due to the club's demanding schedule and limited squad depth.

Their pre-season performances, including encouraging displays against Brentford, will definitely have boosted their chances of increased first-team playing time as they continue their progression from the 'Academy of Football'.

Ben Johnson made 14 Premier League appearances last season, and his ability to perform at both full-back positions, as well as being comfortable playing as a wide midfielder, makes him a useful asset for the Hammers.

Rumours have linked Conor Coventry with a loan to the Championship, but many supporters on social media have voiced that they believe he should be a part of the squad after impressing in both pre-season, and for the U23s.

NEWS: Peterborough have submitted a loan offer for Conor Coventry which West Ham are prepared to accept. It is down to the player whether he wants to stay and fight for his place or play more regular football in the Championship (@ExWHUemployee) pic.twitter.com/cjxqjeU3xt

Coventry started in the middle of the park alongside Manuel Lanzini, and the Argentine is another who looks set to compete for a midfield place, after making the transition from a more attacking role.

The Jewel looked comfortable again in the deep-lying position, and although unlikely to dislodge Declan Rice and Tomas Soucek from the starting XI, Lanzini will provide important back-up during the Hammers' European adventure.

"For me it’s good. I’m feeling very well, it’s a new position for me but I like it. I get more touches of the ball and can help the team keep possession. It’s good to play, to get the minutes and I’m ready for the new season."

🗣 @manulanzini on playing in a deeper position...

The 28-year-old has been unfortunate with injuries in recent years, but he will be hoping to maintain his fitness, and give David Moyes an alternative midfield option. While not as strong defensively as the others in his 'new' position, Lanzini is the most creative of the bunch, and is capable of breaking lines from deep with his incisive passing.

Yes, there were several notable absentees from the squad that faced Brentford, but even when every player is available for selection,  West Ham's squad depth is worryingly thin.

Supporters continue to share their concerns across social media, with Alphonse Areola the sole Summer arrival so far. The Hammers are stacked in the goalkeeping department, but the same cannot be said across the rest of the pitch.

At the very least, a central defender, a versatile attacking midfielder, and a back-up striker are required before the close of the window on August 31.

Rumours circulate on a daily basis linking West Ham with various players across Europe, but the start of the season is closing in, and it is vital that business is completed sooner rather than later if the club are to start the season strongly.

Saturday's Betway Cup against Serie A side Atalanta is West Ham's final pre-season fixture ahead of the 2021/22 campaign. Follow VAVEL's coverage of West Ham throughout the season.

Southampton Vs West Ham - Fabianski: Hopefully it will be another very good game." 5 days ago

What Nikola Vlasic could bring to West Ham 18 days ago

The Warmdown: Hammers tested by visiting Eagles 18 days ago 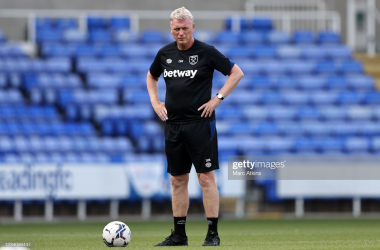