Promotion hopefuls York looked to extend their impressive unbeaten run to 13 games, however 13 turned out to be their unlucky number as The Minstermen fell victim to Boston United.

Right from the off, The Pilgrims made it clear it wasn't going to be an easy ride for York. Dominant throughout the first half, Boston managed to find the breakthrough 38 minutes in when Danny Elliott fired into the top corner from distance to give his side the lead.

Elliott's first half goal was enough to claim all three points for The Pilgrims who marched on past playoff rivals York, and completing the double over them as well.

The result brings Boston level on points with The Minstermen however City just edge it on goal difference.

Chester were growing somewhat stronger under Steve Watson and looked to make it three wins out of three at struggling Gloucester City.

The Seals approached the match will full of confidence and that was reflected during the first few minutes, where they managed to take the lead just 240 seconds in. Marcus Dackers used his skill to beat a defender before curling home into the top corner.

Despite Gloucester pulling one back 10 minutes later, Chester began to storm away from their opponents, netting twice in a matter of minutes to give them a 3-1 lead at the break, Declan Weeks getting one and Dackers claiming his second.

A comfortable second half for The Seals made it look as though they were going to see the game out but a Tigers goal eight minutes from time spiced things up a bit. There was still time for another twist as Matt McClure rose the highest to nod home in the fourth minute of injury time and deny Chester a third consecutive win.

The Heed romped to yet another victory in their title charge, making it four on the bounce against a poor Curzon Ashton side.

It was no surprise at all when Gateshead took the lead after 14 minutes, and it was definitely no surprise to see Cedwyn Scott on the scoresheet, grabbing his 20th league goal of the season, finishing off a rebound.

With the half hour mark in sight, the unstoppable home side struck again, another prolific goal scorer in Macaulay Langstaff curling it past the 'keeper.

A penalty was awarded to The Tynesiders five minutes before the break and Scott dispatched it with no difficulty, claiming a second on the night. Looking for the hat trick, Scott kept on pushing, and even though a third goal for him was chalked off, he still managed to seize the match ball within the final ten minutes, putting The Heed well out of reach.

An impressive win at Chorley gave Blyth just the hope that they needed when they prepared to face a side three points ahead of them - Bradford Park Avenue. Bradford had just come off the back of a third consecutive loss so it was a great opportunity for Blyth.

This was another match where the scoring was opened in the 14th minute, and Park Avenue had it through Harrison Hopper who netted an amazing strike.

Soon after, Simon Richman doubled the lead for The Green Army and then Lewis Knight finished the game off for them right on half time.

A quiet second half ended in Blyth's Lewis McNall reducing the deficit with a consolation goal right at the end, and Bradford went home the happier side.

A fantastic result for Farsley Celtic left them delighted as they pulled away from the relegation zone, with three points against Leamington to make sure Guiseley dropped to rock bottom.

The Brakes didn't get off to the best start as they fell behind just six minutes in. A ball down the right channel looked harmless , but when Jack Lane looked to let it run through to Weaver, Farsley's Luke Parkin nipped in to take it past the stranded keeper and finish well into the far corner from a tight angle to the delight of the home support.

That solitary first half strike from Parkin sealed the win for The Celt Army, lifting away from rock bottom.

With York already losing to Boston, I don't know many expected Southport to fall to defeat too in the playoff race. A goal from Jake Cassidy in the first half was all Darlington needed to overcome their under-par opponents.

12 minutes before the break under some pressure, striker Jake Cassidy pulled off a great turn before finding space and firing a right footed effort into the back of the net.

Coming into the closing stages, The Quakers were given a golden chance to solidify their lead after a man in black and white was brought down in the area. However, Darlo failed to convert from the spot, with Cam Mason pulling off a fantastic save.

Mason's penalty save wasn't enough encouragement for his team to go find a late equalizer and so Southport travelled back to the coast empty-handed, whilst The Quakers returned to winning form.

Maybe, the FA Cup run had finally caught out Kidderminster as they started to slip in the National League North. Chorley shouldn't have been too much of a test for them, with The Magpies being dismissed by Blyth Spartans at the weekend.

The first half ended goalless with a fair few chances at either end, but neither side could break through.

15 minutes after getting back underway, things were made easier for Kiddy as Chorley were reduced to 10 men, Millenic Ali receiving his second yellow for an elbow.

It wasn't long before The Harriers made their advantage count, Lewis Montrose  finding the bottom corner. But 10-man Chorley pressed for an equalizer and they found it in the final third as Lewis Tomlinson caught Kidderminster out and fired home past Luke Simpson to share the points.

Coming into the back end of this season, Spennymoor hadn't much at stake with no risk of relegation and an unlikely playoff push. But Fylde were looking to leapfrog Kidderminster with a win against The Moors.

Manager James Rowe had recently signed Will Hatfield from Darlington and what an impact he made on his debut - a ball into the danger zone from Tom Walker was latched onto by a leg from Hatfield, who fooled the 'keeper and stuck it into the back of the net.

The debutant's goal midway through the second half saw Fylde move into 3rd place and regain momentum in the race for promotion.

A must-win game for Brackley saw them take on Alfreton Town, as The Saints hoped to continue their title challenge. They successfully pipped the visitors to a one goal victory which kept them in the balance for the National North title.

Lee Ndlovu came closest for Brackley, crashing a header off the crossbar shortly into the second half. However, he soon made a chance count after combining with Wes York before giving his side the crucial lead.

The Saints could probably have added a few more goals but it turned out just the one was needed to get across the line. 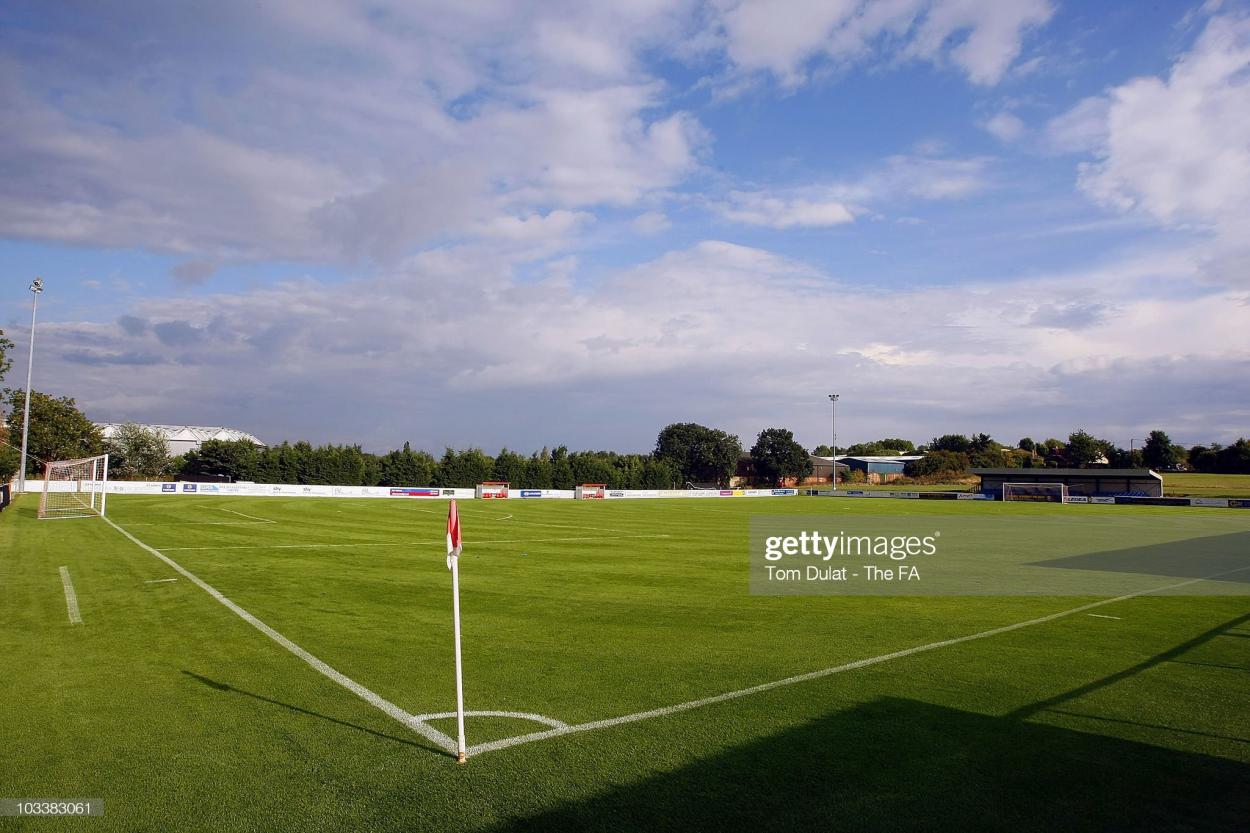 Two sides near the bottom of the table faced off at Nethermoor Park, with a huge three points at stake, a draw not doing much good for either of these relegation battling teams.

New Guiseley signing John Johnston was gifted with a great opportunity to break the deadlock after just ten minutes, when The Lions were awarded a penalty. Johnston couldn't make the impact he would have liked to, scuffing his spot kick and the Farsley 'keeper easily saving.

With that big chance missed, the game finished goalless and it cost Guiseley big time, as they hit rock bottom and fell into the only relegation spot.

In an attempt to keep themselves in an unlikely playoff race, Hereford made the trip to Kettering, who, realistically, they had to beat to keep their season alive.

It almost went pear shaped for The Bulls right from the very beginning as an early shot from Kettering's Jordan Crawford looked to be heading for the top corner, but struck the bar instead.

However, learning from their mistakes, Hereford pounced on a defensive error from the hosts on the 25 minute mark, and made it count, Miles Storey putting it into an open net.

The first half goals determined the game in the end, and fortunately for The Bulls, a York loss meant they were still in with a chance of the playoffs.

Alfie Roberts: Importance of family, the poison of social media, and the greatest job in the world a day ago

Burnley sign Scott Twine for undisclosed fee a day ago

What will Dan Ballard bring to Burnley? 3 days ago

Opinion: Three reasons why I can’t stand the transfer window 7 days ago

Liverpool complete signing of Calvin Ramsay from Aberdeen 7 days ago
//