Bayern Munich extended their lead at the top of the table to nine points on Sunday in another exciting weekend in the Frauen-Bundesliga.

The reigning champions kept up their winless start to the season with another victory, taking advantage of rivals VfL Wolfsburg's defeat as the distance between the two sides increased, despite them being just one place apart in the standings.

Things got a lot tighter at the bottom of the table this week too as the drama continued to build in week 10 of the season.

The two big games of the weekend saw leaders Bayern Munich keep their place at the top of the table as they narrowly beat third-placed SGS Essen 2-1.

It was a ground out win from the pacesetters, despite them taking the lead early on through Caroline Abbé, the Swiss defender making her way forward to open the scoring after only nine minutes.

However, they would be pegged back by a goal from another defender just after the interval - Nina Brüggemann on the scoresheet for the second time this season following a summer move from second-tier side BV Cloppenburg.

Fortunately for Bayern, one of their brightest young talents, Sara Däbritz, stole them all three points with only a minute remaining, the 20-year-old netting her third of the season to ensure her side stay top of the standings.

The gap at the top has been extended to nine points now too after Wolfsburg failed to defeat an out-of-sorts 1. FFC Turbine Potsdam in Sunday's other big game, falling to a 5-2 defeat at home.

Potsdam have had a tough start to the season, totting up just 10 points from their opening nine games, but one would not have thought that watching their five-star performance on Sunday.

The visitors may have led the game 1-0, Svenja Huth breaking the deadlock after 24 minutes, but it was the Wolves who led at the break, Lara Dickenmann and Caroline Hansen turning the game around.

The second half was phenomenal from Potsdam though, Huth equalising four minutes after the interval and Tabea Kemme then putting them ahead 60 seconds after.

Marina Makanza's strike later in the half gave them a comfortable advantage before Huth put the cherry on top of the cake as she sealed her hat-trick and all three points in the 88th minute, ending the Wolves six-game winning streak.

Whilst Wolfsburg slipped up, 1. FFC Frankfurt closed the gap on the two Champions League spots as they defeated SC Sand 2-0.

A late first half double got them the three points, Dzsenifer Marozsan and Mandy Islacker on target in the closing stages of the opening period to give temporary manager Matt Ross a win in his first game in charge.

The Australian has been given the job until Christmas at least, and will hope to convince in that time to land the job on a permanent basis.

He's certainly got off to a good start too as Frankfurt go level on points with Wolfsburg, lifting themselves to third.

Whilst the gap at the top was extended, the gap at the bottom narrowed, with 1. FC Köln registering their first win of the season, at USV Jena, after winning promotion from the 2. Frauen-Bundesliga earlier this year.

Two early goals did it for the Billy Goats, Lise Overgaard-Munk breaking the deadlock after four minutes and Anna Gerhardt doubling this lead inside the opening 10 minutes.

With this comfortable advantage so early in the game, they were able to record three points with relative ease, confidently seeing the rest of the game out at 2-0 to take their points tally to five, albeit with them still stuck to the foot of the table.

However, they are only one point behind the other club occupying a spot in the relegation zone, fellow newly-promoted team Werder Bremen, who were condemned to a heavy 4-0 defeat by TSG 1899 Hoffenheim, the victors lifting themselves to fifth in the table in the process. 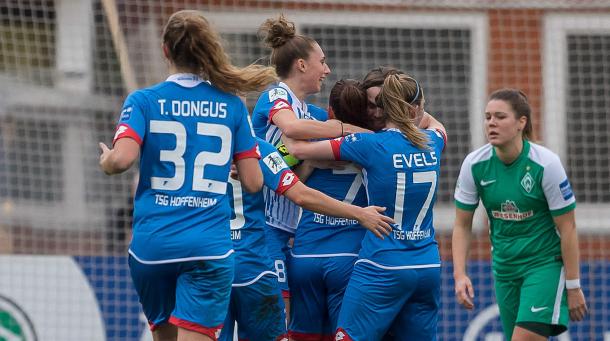 It was extremely comfortable for the visitors too, Martina Moser and Theresa Betz putting them two goals to the good at the break before Emily Evels and Christine Schneider wrapped things up in the second period.

Bayer Leverkusen are now being dragged into the scrap at the bottom too, with their massive 6-1 loss at SC Freiburg meaning they sit just two points above the relegation zone.

It was a disastrous day for the visitors, who went in at half time with the game all but over, trailing 3-0 thanks to goals from 16-year-old Giulia Gwinn, Sandra Starke and Sarah Puntigam.

Marisa Ewers registered a consolation for Leverkusen from the spot 12 minutes from time, but it was too little too late, coming in between Hasret Kayikci's two goals and a strike from Cinzia Zehnder.

The win lifts Freiburg to sixth too, only five points off the top two as their great form continues.

FC Koln 1-1 Werder Bremen: Honors even at the RheinEnergieStadion 8 hours ago

FC Koln vs Werder Bremen preview: How to watch, kick off time, team news, predicted lineups, and ones to watch a day ago

Borussia Monchengladbach vs Bayer Leverkusen preview: How to watch, kick-off time, team news, predicted lineups, and ones to watch 2 days ago

Bundesliga Matchday 24: Three things to look out for 3 days ago

Jahn Regensburg vs Werder Bremen: How to watch, kick off time, team news, predicted lineups, and ones to watch 6 days ago

RB Leipzig vs Borussia Monchengladbach match preview: How to watch, kick-off time, team news, predicted lineups and ones to watch 9 days ago

Bundesliga Matchday 23: Three things to look out for&nbsp; 10 days ago
//