SHE0
END9 hours ago

Manchester United’s latest signing Nemanja Matić has promised boss José Mourinho that he will be ready for the start of the Premier League season on the 11th August.

Matić signed from the Red Devils from Chelsea at the end of July for a fee of £40million. 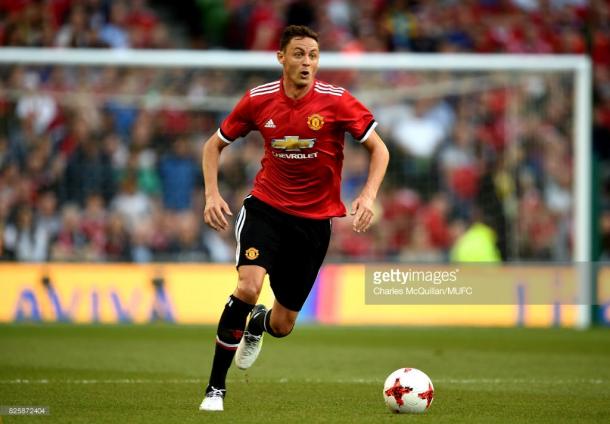 "It was nice" to make United debut, says Matić

Matić appeared to impress supporters at the AVIVA Stadium in Dublin on Wednesday night, showing a mixture of composure and leadership as he helped United to a 2-1 victory over Serie A side Sampdoria.

Speaking to MUTV, Matić spoke with delight of his first 45 minutes as a United player,

“Yes it was nice. It was nice to play in front of our supporters - I think there was a full stadium of Manchester supporters. That was special for me and I’m happy to make my debut for such a big club like Manchester United.”

“It was strange [not playing in pre-season] because the team has played and had a good pre-season, but as you know I trained alone in London. I tried to give my best to control the game well, to give the game balance, and I think, for the first game, it was good for me. Step by step, I think I will get better and better and I hope I will help the team to achieve something this season.”

Matić working hard to be fit for Super Cup

Matić’s debut for Mourinho’s side was his first game since May due to his situation at Chelsea. However, despite the lack of minutes on the field, the Serbian believes he can be fit for their eagerly awaited Super Cup game against Spanish giants Real Madrid.

José Mourinho’s side are in good form going into their Super Cup match, after winning six out of their seven games on their tour of the United States, Norway and Ireland.

Manchester United vs Burnley: Things to look out for 13 hours ago

Keep heads, Wigan 2006 and don’t stop – why a trophy would kickstart Solskjaer’s managerial career 13 hours ago

Solskjaer on the performance, semi-final opponents and more 2 days ago

The Warmdown: Manchester United progress to the Semi-Finals of the UEFA Europa League 2 days ago

Manchester United 2-0 Granada [4-0]: United through to their fifth semi-final under Solskjaer 2 days ago

Manchester United vs. Grenada Preview: Team news, ones to watch, predicted line ups, kick-off time and how to watch 3 days ago

Key quotes from Soskjaer ahead of Granada visit 4 days ago

Manchester United: On the comeback trail 3 days ago

The Warmdown: United battle back despite VAR controversy 6 days ago
//