Manchester City host Birmingham City in the Third Round of the FA Cup at the Etihad Stadium on Sunday. The clash will be the 147th meeting between the two sides.

Pep Guardiola’s City reached the Semi-Final last time out, losing to Arsenal at Wembley Stadium in the summer. The last time City failed to reach the Fourth Round was in 2012.

Birmingham on the other hand, have been eliminated from their last seven FA Cup ties against Premier League opposition.

City host the West Midlanders off the back of a 2-0 League Cup Semi-Final victory against rivals Manchester United.

Second half goals from City defenders John Stones and Captain Fernandinho sent Guardiola’s side through to the Final as they defend their seventh League Cup and search for an eighth against Tottenham Hotspur.

The visitors last outing came in the Championship as Birmingham lost 2-0 Blackburn Rovers at St Andrews.

Goals from Blackburn’s Adam Armstrong and Bradley Dack meant that Aitor Karanka’s side remained 18th in the table.

Hoping to eventually add a seventh FA Cup to the collection, City begin their quest for silverware as they play Blues for the first time since a League Cup meeting in 2011.

The two teams last met in the Third Round of the tournament nine years ago. City won 2-0 at the Etihad with goals from Owen Hargreaves and Mario Balotelli securing the victory.

Birmingham are winless in their last 12 games against City.

City are unbeaten in their last 12 games in all competitions and will play Birmingham having won their last five.

Sat 5th in the Premier League standings, four points off the top and with two games in hand on league leaders Liverpool, City are high flying.

Making lightwork of both Manchester United and Arsenal in the League Cup this year, City then brushed aside Chelsea at Stamford Bridge in the league last week.

City last lost a game of football in November. A 2-0 loss to Tottenham in North London.

Birmingham are six games without a win. Having lost their last two against Derby County and Blackburn Rovers, Blues are without a victory in 2021.

Guardiola has confirmed Sergio Aguero is close to returning to full fitness and hinted that the striker could start against Birmingham.

City goalkeeper Ederson told his social media followers that he was self-isolating following the club’s coronavirus outbreak. He played no part against United and is not expected to be back for Sunday.

Veteran goalkeeper Scott Carson was another victim of the Etihad coronavirus outbreak. It leaves Zack Steffen and James Trafford as City's only fit shot-stoppers.

As is the case with the keepers, City forward Ferran Torres is another player affected by the Citizens' COVID-19 cluster. The Spaniard will sit this one out as he self-isolates.

Midfield protege Tommy Doyle also returned a positive coronavirus test a few days ago. He is undergoing a period of quarantine and so will not feature.

Defender Eric Garcia was already side-lined with a muscular problem before contracting coronavirus. He won’t be available to play.

Aymeric Laporte missed out on the Old Trafford win with a hamstring problem. The centre-back is unlikely to be cleared for the FA Cup tie.

Nathan Ake didn’t play against Chelsea or Man United due to a muscular problem. It is unlikely he will feature this weekend.

Cole Palmer was confirmed to have tested positive for coronavirus just hours before the United tie. The 18-year-old will not feature on Sunday.

Blues players Gary Gardner and Alen Halilovic are not expected to be fit.

The game will be available to watch live on the BBC Sport website, which is streaming eight third round fixtures across the weekend.

“The most important thing is the consistency we have shown in the last three games, especially after our draw against West Brom.

“We changed the way we played against Newcastle, Chelsea and United, and we have to show that consistency for a long time, especially in January and February.”

“I don’t go to City to lose five, six or seven niI. I want to compete with them. We have to be brave.

“You have to be brave against Pep’s teams. You have to go to the pitch believing you can beat them.

“Everybody knows that it’s going to be really, really difficult on Sunday. They’re an amazing team 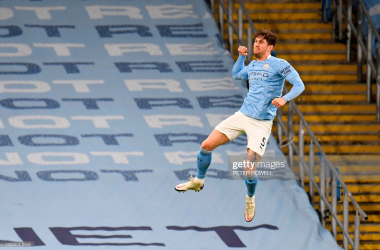 Manchester City vs Crystal Palace Preview: How to watch, kick-off time, team news, predicted lineups and ones to watch5 days ago

The Warm Down: Foden breakthrough enough to seal win against Seagulls7 days ago