Aaron Wan-Bissaka was the second signing in the Ole Gunnar Solskjaer era at Manchester United. The £50 million pound right-back was purchased after a solid first full season in the Premier League with Crystal Palace in 2018/19.

It was a position that United wanted to strengthen following the departure of Antonio Valencia in 2017 and that's what they did by signing Wan-Bissaka. It seemed like The Reds had the right-back slot filled for the years.

Since then, there have been questions about whether Wan-Bissaka offers enough going forward compared to the modern-day right-back, yet this is unfair criticism largely and focuses on the wrong area that he needs to improve.

In fact, Wan-Bissaka has proven to be a decent offensive weapon for The Reds, averaging 1.48 shot-creating actions per 90 in the Premier League - his best average in his short career thus far.

But the right-back also contributes towards the build-up of many goals, 10 exactly, in the league. The graph below, courtesy of The Athletic, shows that only two full-backs, Stuart Dallas and Joao Cancelo, have contributed to more goals this season than Wan-Bissaka and the former has played a range of positions this season, while the latter often inverts and is almost seen as a midfielder in the Manchester City set-up. 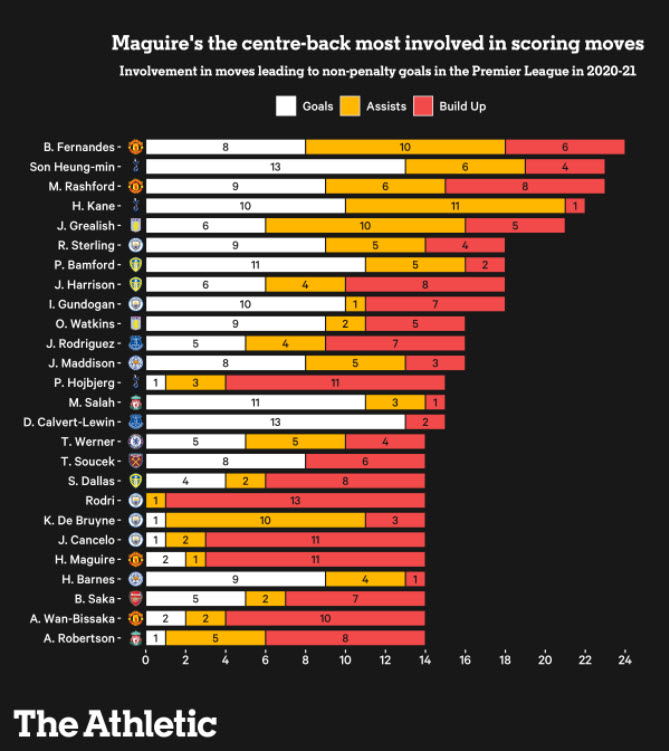 The graph also shows that there have been just four players in the division with more involvement in the build-up to goals than United's right-back and this doesn't seem to suit the narrative that he is poor in attack.

In the final third, Wan-Bissaka has a great low cut-back cross, as well as a good pass into the half-space from wide - he is gaining a larger repertoire in his offensive arsenal but he definitely is not one of the best, yet. So where are his flaws?

The main issue with Wan-Bissaka is that he is solid in the defensive third - we all know that - and decent and ever-improving in the attacking third. It is the bit in between where he needs to improve, it is the progression into the attack that he is not great at.

The right-back is not exactly a progressive passer, with an average of just 3.91 per 90. While he is a good dribbler of the ball and more than often takes on his man, he is not yet comfortable enough with the ball to be an effective carrier, like his teammate, Luke Shaw, this is mainly due to his average close control which limits him in this aspect.

His lack of comfort on the ball in certain areas also means that Wan-Bissaka is somewhat of a pressing trigger for the opposition in a press.

We see that Wan-Bissaka can be good in quick combinations in wider areas, so an improvement of this when operating a bit more centrally - in the half-space, could help him when being pressed.

United's number 29 has the physical attributes to be a solid progressive carrier and he also has good technical ability most of the time - it just needs polishing and refining.

The help of a true right-winger would also be beneficial for the player, as he often has little help when looking to progress the ball on the right.

At just 23 years of age, the former-Palace man has room to improve all areas of his game, yet, improvement in his progression and actions in the middle third of the pitch will see him become a much more well-rounded player and should see him develop into the all-rounded right-back that all United fans seek.

Erik ten Hag: "I had choices to work at a different club, with a better foundation. But I chose Manchester United." 5 days ago