Jurgen Klopp's side edged past Aston Villa after Trent Alexander-Arnold scored a stupendous goal one minute into added time.

During the first 10 minutes of the game, Liverpool constantly piled on the pressure and it very nearly paid off. Mohammed Salah pounced on a Tyrone Mings mistake but his effort whiskered just wide of Emi Martinez's goal.

Two minutes from the interval, Villa's John McGinn played a short pass through to Ollie Watkins, who controlled it under pressure from Ozan Kabak and belted a low left-footed shot through the hands of Alisson to give the away side the lead.

Roberto Firmino scored for the hosts four minutes later with an exquisite finish, lifting the ball over two defenders and the keeper from six yards but after a lengthy VAR pause, the technology has deemed Diogo Jota to be offside in the build up and disallowed the goal.

Just before the hour mark, Mohammed Salah put the hosts level after Andy Robertson’s fierce shot was pushed away by Emi Martinez, diving to his left, but the Egyptian reacted smartly to the rebound shot goalwards and into the back of the empty net.

Villa went so close to making it 2-1 as Trezeguet's shot rattled off the post. The ball then comes back to him and he could only head the rebounded shot wide.

Pure inspiration from Alexander-Arnold gave Liverpool the lead in injury-time as his effort flashed into the far corner from the edge of the area.

Trent Alexander Arnold once again proving the doubters wrong and once again one of the brighter sparks for Liverpool.

The full-back was always looking to create opportunities and nearly broke the deadlock in the first half.

He was eventually rewarded having scored the winner in the Kop end in front of England boss, Gareth Southgate

Key Quotes: Klopp's press conference ahead of the Premier League clash with Brentford 4 days ago 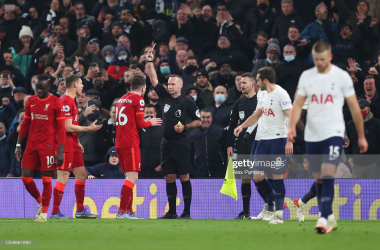