After winning both UEFA Europa League games so far this season, West Ham United were coming into their match against KRC Genk with a lot of confidence.

And it transpired onto the pitch as, thanks to goals from Craig Dawson, Issa Diop and Jarrod Bowen, The Hammers dispatched their opponents.

The Scotsman made six changes to the side that beat Everton 0-1 at Goodison Park last Sunday, with the likes of Nikola Vlasic, Manuel Lanzini, Andryi Yarmolenko, Craig Dawson, Issa Diop and Alphonse Areola all coming into the starting eleven.

Youngsters Harrison Ashby and Dan Chesters, who has been earning rave reviews from the academy recently, both made the bench.

“Chesters is some player”- Jack Collison

Genk made just three changes to their team that lost 2-0 to Sporting Charleroi in the Jupiter Pro League last Sunday and all three were to their back line as Jhon Lucumi, Carlos Cuesta and Angelo Preciado all slotted into the Belgian sides back four.

West Ham started on the front foot and created an early chance when Lanzini slipped Vlasic through on goal with a clever reverse pass, the Croatian tried to slot his effort into the bottom right corner but sent his effort wide of the post.

Genk then nearly caused their hosts a shock when Théo Bongonda seemed to have given his side the lead after scrambling his header over the line following a dangerous ball into the box from Japanese international Junya Ito, however the lineman had risen his flag for an offside call on Ito during the build-up.

The Belgians then made another good chance to take the lead in the 15th minute when Genk goalkeeper Maarten Vandevoordt played a brilliant ball over the top to send Bongonda clean through on goal forcing Areola to come out of his area and clear the danger himself.

Despite the early chances from Genk, it was West Ham who had the first real sight of goal when Jarrod Bowen’s goal bound shot was blocked from close range following a cut back from youngster Ben Johnson. The rebound dropped to Aaron Cresswell on the edge of the box but the Left Back’s shot was dragged wide.

Genk’s gameplan soon became obvious when a short corner was crossed into Paul Onuachu at the back post in the 37th minute. Areola came rushing to claim the ball but lost out to the 6’7 striker whose looping header went narrowly wide, sparing the keepers blushes.

West Ham had been linked with the 27-year-old during the summer transfer window after the Nigerian scored 29 league goals for the “The Smurfs” the previous season (according to TransferMarkt) and were very lucky that their former target didn’t come back to bite them on that occasion.

The first half had mainly been a cagey affair with neither side really creating many clear cut chances but it was the Hammers who created the first real moment of danger just minutes before the half time whistle.

Cresswell broke down the left hand side and sent a low ball into the box for a lurking Bowen, who connected with a clever backheeled effort which unfortunately went straight at the keeper allowing Vandevoordt an easy save.

Genk’s weakness all season had been set pieces and West Ham finally took advantage of that on the stroke of half time when Creswell whipped a perfect corner into Dawson at the front post and the 31-year-old looped his header into the top left corner to give Moyes men a 1-0 lead going into the break. 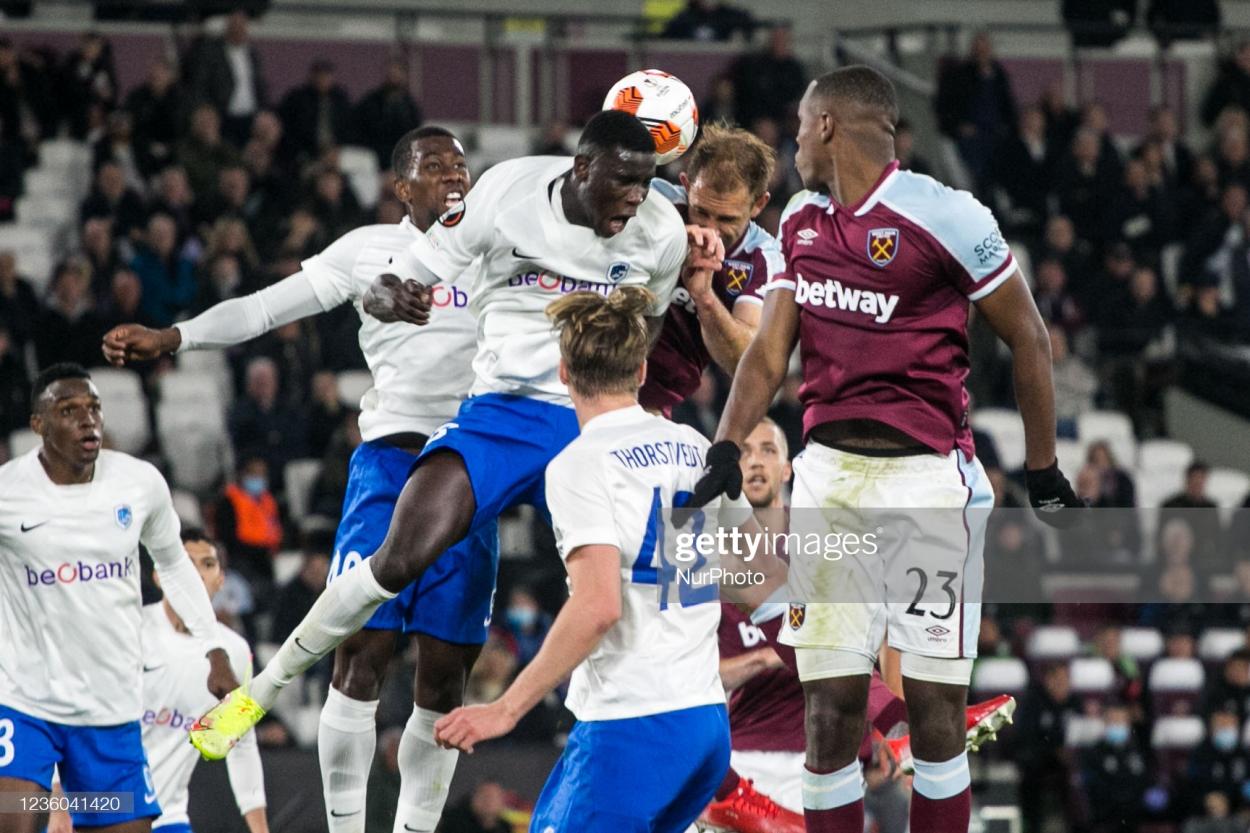 In the second half, the Belgians came out in the second half sharp and nearly got themselves level in the 50th minute when Kristian Thorstvedt worked himself some space and had a crack at goal. His shot took a deflection off Issa Diop which nearly threw off Areola but the PSG loanee managed to gather the ball.

Despite Genk’s early chance, West Ham picked up where they left off in the first half and struck again at Genk’s achilleas heel. Cresswell sent in another pinpoint cross from a wide freekick which was met by Issa Diop at the near post and the Frenchman buried his header in off the crossbar to give the Hammers a 2-0 lead in the 56th minute.

Instead of sitting back and holding onto their two goal advantage West Ham were ruthless and grabbed their third of the evening almost immediately from their opponents kick-off.

Manuel Lanzini won the ball on the right and played the ball to Bowen who drove straight through the Genk defence, cut onto his left foot and smashed his effort into the bottom right corner. Vandevoordt got a hand to Bowen’s strike but it wasn’t enough to stop the 24-year-old from making it 3-0 to West Ham.

Bowen’s goal killed off any Genk resistance and it was relatively plain sailing for West Ham thereafter, the only other major chance came when Yarmolenko latched onto a through ball on the left hand side and cut a good ball back for Vlasic on the six yard box. The 23-year-old shot first time, looking for his first West Ham goal but it was smartly blocked by Cuesta.

The academy of football had a great moment in the 89th minute when the talented Dan Chesters was brought on for Lanzini to make his West Ham debut which was met by thunderous applause from the West Ham faithful.

Chester’s had time to make a great tackle in the middle of the park, which pleased the home fans enormously. Before the fulltime whistle went.

The win against Genk ensured that Moyes’ highflying Hammers went six points clear at the top of group H after Rapid Wien picked up their first three points against Dinamo Zagreb. West Ham’s next Europa League is the reverse fixture against Genk which will take place at the Cegeka Arena on the 4th of November.

Get your passports ready!

The Warmdown: Youthful Hammers bested by Croatian Champions a month ago

"It was a great cross": Key points from David Moyes' post-Chelsea press-conference 2 months ago