DFB Pokal holders Borussia Dortmund travel to the Schwarzwald-Stadion on Saturday afternoon to face sixth-tier outfit 1. FC Rielasingen-Arlen, who are taking part in the tournament for the first time in the club's history.

With the odds overwhelmingly in Der BVB's favour the result is almost certainly a formality with a large scoreline on the cards, but can the hosts offer up a more stern test than is expected of them?

Historic day for Verbandsliga Südbaden side

Rielasingen-Arlen are not a side that are known to many German football fans, with the club currently plying their trade in the sixth-tier of the German football pyramid following a fifth placed finish in the Verbandsliga Südbaden last season.

The club's most memorable achievment came during that season, as they lifted the South Baden Cup thanks to a thumping 6-1 win over VfR Hausen in the final and qualified for the DFB Pokal for the first time in the club's 18-year history as a result.

Fans are under no illusions with regards to the game itself and see the game as a celebration of the club's historic achievement as well as a chance to see world-class international players facing off against their team.

The club's official website have urged fans to come together and make the day a "football festival", with requests including that fans leave their mobile phones at home in order to create a party atmosphere around the ground.

Jürgen Rittenauer's men got their season underway last Saturday with a 1-0 away defeat against FV Lörrach-Brombach, while their pre-season schedule included a 6-0 defeat at the hands of VfB Stuttgart's reserve side. 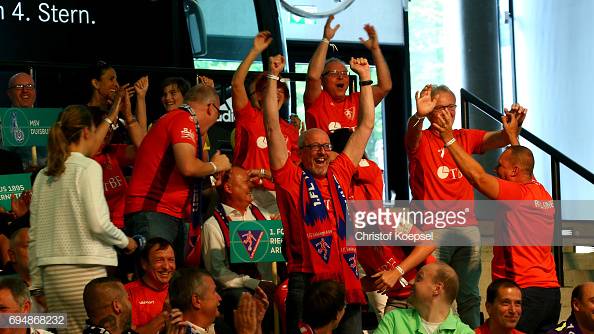 Result merely a formality for Dortmund

Peter Bosz's side are understandably the odds on favourites to win by a convicing scoreline on Saturday afternoon, with the only real question being whether they will field a strong side or opt to give their youngsters a run out.

Following last week's defeat on penalties in the DFL-SuperCup at the hands of Bundesliga champions Bayern Munich, the DFB Pokal holders will be looking to ensure they score as many goals as possible tomorrow afternoon while keeping their squad intact.

Pre-season has thrown up a few surprising results for the Black-Yellows with 1-0 defeats against Atalanta and Espanyol as well as a 2-2 draw against 2.Bundesliga side VfL Bochum not the kind of form they wanted heading into the new season.

Summer signings Dan-Axel Zagadou and Mahmoud Dahoud made their first competitive starts for Dortmund in the Super Cup final while former Freiburg striker Maximilian Philipp came off the bench in the 90th minute.

The absence of reported Barcelona target Ousmane Dembélé from training earlier in the week resulted in the 20-year-old being fined a week's wages, in addition to being handed a suspension for the same duration of time, has added an unnecessary distraction for Bosz going into the new season.

Dortmund have quite a lengthy injury list at the present moment, with a number of first-team players out of the running to be included for Saturday's game.

Marco Reus, Raphaël Guerreiro and Julian Weigl are the three men who are yet to close in on a return to the first-team, with Reus expected to be out until the end of the year due to his cruciate ligament injury while Guerreiro will not be back until October. Weigl still has a month to wait until his return to action after fracturing his ankle back in May.

Marcel Schmelzer, Sebastian Rode and Mario Götze will not be involved in Saturday's game although they should return in time for Dortmund's opening game in the Bundesliga against Wolfsburg on August 19.

Erik Durm and Super Cup final goalscorer Christian Pulisic are doubts for the match while Dembélé will play no part due to his suspension by the club.

Koln vs Borussia Monchengladbach preview: How to watch, kick-off time, team news, predicted lineups and ones to watch 18 days ago

Werder Bremen vs Arminia Bielefeld Preview: How to watch, kick off time, team news, predicted lineups, and ones to watch 19 days ago

Bayern Munich vs Borussia Dortmund DFL-Supercup Preview: How to watch, kick off time, team news, predicted lineups, and ones to watch 22 days ago