SHE0
LIV2
END9 hours ago

Arsenal could only claim a point away at Norwich City, as Lewis Grabban cancelled out Mesut Ozil's opener in a 1-1 draw at Carrow Road.

Arsene Wenger's men came into the game as hot favourites despite their loss to West Brom last time out, but found themselves frustrated for large periods of the game by a Norwich side determined to make their mark in the Premier League, after impressing in their 1-0 loss to Chelsea last week.

The first 10 minutes of the game were rather cagey with both teams eager to set the tempo, although sadly for Arsenal Laurent Koscielny had to be taken off after he seemed to suffer an injury to his side. The first real chance of the game fell on 17 minutes to the visitors when Nacho Monreal's low cross was met by the in-form Mesut Ozil but his effort was deflected wide by Sebastian Bassong.

Arsenal went close again just minutes later when Ozil found Monreal, who had bombed forward once more, and the full back's cross was met at the near post by Olivier Giroud, but the Frenchman could not direct his effort goalwards. John Ruddy was then called into action for the first time in the 26th minute after Santi Cazorla manoeuvered his way through the Norwich midfield, he then found Alexis Sanchez whose powerful effort was saved by the Canaries shot stopper.

However, just minutes later Arsenal took the lead. A poor clearance by Ruddy fell to the feet of Sanchez, who threaded a perfectly weighted pass through to Ozil, and the German maestro lifted the ball over Ruddy into the net. The attacking trio of Ozil, Sanchez and Aaron Ramsey continued to torture Norwich's defence shortly after with Ramsey having a effort deflected just wide in the 34th minute after some more splendid intricate play on the edge of the home sides box.

Norwich's first effort on Petr Cech's goal came in the 42nd minute when Robbie Brady had a speculative effort from just outside the box which was well beaten away by the Arsenal keeper. However, just a minute later Norwich were level. 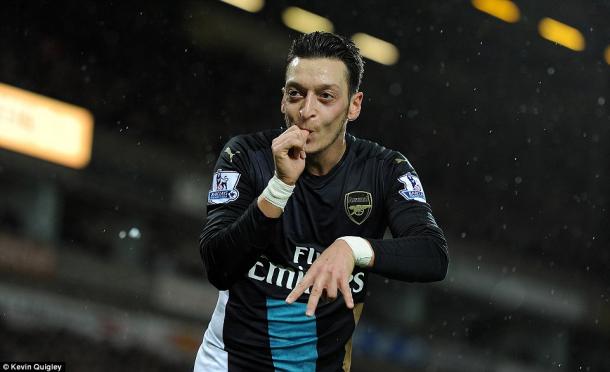 Brady threaded a pass into the feet of Lewis Grabban who got goal side of Gabriel Paulista in the box and calmly slotted the ball under the body of Cech. The visitors could have gone in at half time in front but Wes Hoolahan was unable to control his effort after a superb cross by Andre Wisdom found the unmarked Irishman in the Arsenal box.

Gunners go in search of 3 points

The second half started much the same as the first with Arsenal keen to dominate possession while Norwich were happy to sit back and let the Gunners dictate proceedings. Arsenal nearly retook the lead on 53 minutes when Ruddy misjudged a cross by Sanchez which almost allowed Ozil in at the far post but Bassong was on hand once again to clear the danger. Unfortunately for the Gunners the Chilean winger limped off injured moments later clutching his hamstring.

It was the Norwich who had the best chance after the break on 70 minutes after a deflected cross was heading towards the bottom corner but it was saved superbly by the reflexes of Cech. From the resulting corner Jonny Howson went close but he couldn't keep his effort down after a scramble in the Arsenal box.

The Gunners were unable to get a foothold in the second half with the visitors growing in confidence with every passing minute. Giroud had their first real effort of note in the second period on 77 minutes but he was unable to get his header on target after being found by substitute Alex Oxlade-Chamberlain. The home side had another chance to take the lead on 80 minutes but Martin Olsson unselfishly tried to find a team mate when an effort on goal may have been a better option as Gabriel was able to clear up the danger.

Arsenal went in search of a winner in the final 10 minutes but were unable to create any clear cut chances against a well drilled and determined Norwich side as they nullified Arsenal's vast offensive options.

The result leaves Arsenal still chasing both Manchester clubs and high flying Leicester City while the point will surely boost morale in the Norwich camp as they strive to try and survive in the Premier League.

The Warmdown : Aubameyang leads comeback as Arsenal progress to the last 16 3 days ago

Nicolas Anelka: 24 years on 6 days ago

Kieran Tierney: The positives of his return 6 days ago

Bellerin or Cédric: Who should Arteta's first choice be? 7 days ago

Should Arsenal Stick or Twist on Dani Ceballos? 9 days ago

Benfica 1-1 Arsenal: Bukayo Saka scores to put Arsenal in the ascendancy on a frustrating night 10 days ago
//