Wayne Rooney sent many Manchester United fans into an odd sense of celebration as he netted his 200th Premier League, for Everton, but against rivals Manchester City at the Etihad Stadium.

Speaking to Sky Sports, he said he hoped the red half of Manchester had enjoyed his goal. They certainly did, and so did he.

After accepting that he won't be getting much game time under José Mourinho, Rooney was allowed to leave on a free transfer, after much speculation, to his boyhood club Everton from United. Rooney has already hit the ground running for Everton having scored two goals in two games in the Premier League. Should he keep up his fine form throughout the season, there is a possibility that Everton will have a good run in domestic and European games.

Wayne Rooney scored his 200th Premier League goal with a class first-touch finish to put Everton in front. That was until Raheem Sterling found the equalizer in the 82nd minute to rescue his 10-men team a deserved point.

After the match, Rooney told journalists that he was feeling good after playing games, something that he didn't get to do much under José Mourinho. He said: "The thing for me is that I want to play. Last year I didn’t play enough games and I paid the price for that. I played a lot of games over the last few weeks and I feel good."

When asked about how sweet it was scoring at the Etihad once again, he answered "it was nice to score at the Etihad. I have already scored a few times here. It was a sweet moment and I am sure that the red half of Manchester would have enjoyed that." with a cheeky laugh. His initial reaction and joke was, 'what, again?' 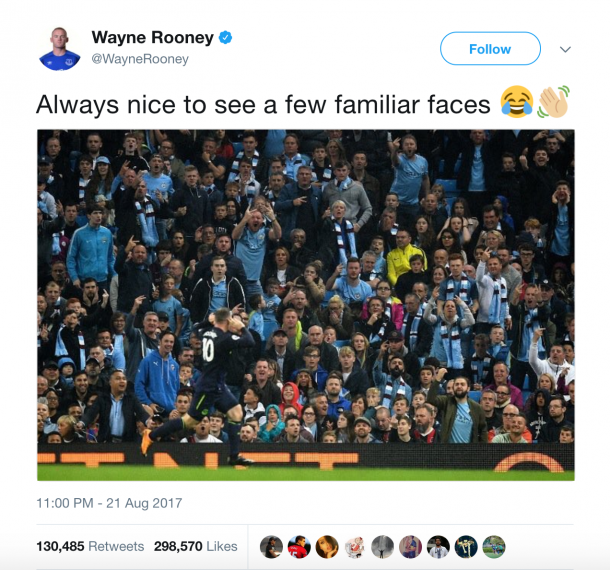 The photo shows an identical scene when Rooney scored against the Citizens years back, but in the Red of Man Utd. This tweet shows the resemblance: 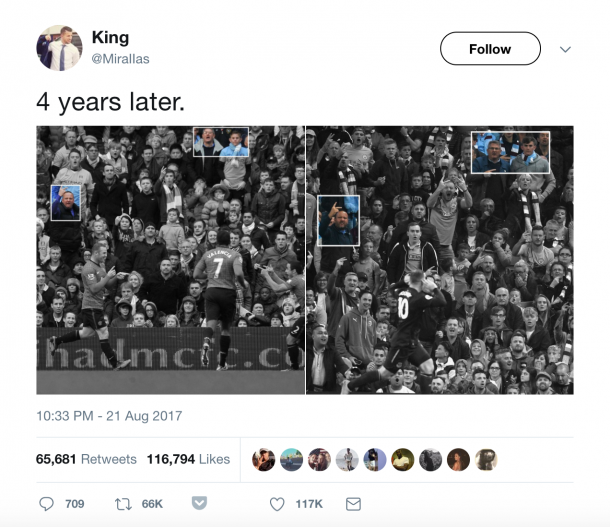 The Warmdown: Man United put in team performance to win in Paris 14 hours ago