This week's fixtures saw a change at the top of the table and a farewell to an England legend. Also, one team exacted revenge and beat the team who knocked them out of the FA Cup.

Casey Stoney recently announced her retirement after a long and successful career for both club and country. This was to be her final game and was given the captain's armband. She was also given a guard of honour before the match by both teams.

It turned out to be a great send off for Stoney as Liverpool put previous performances behind them to win. Jess Clarke opened the scoring for the Reds but Sunderland drew level later on through Dominique Bruinenberg.

However, in the second half, both Clarke and Beth England scored within a few minutes of each other to secure all 3 points. Casey will now take on a role for the Lionesses as part of Phil Neville's backroom staff.

The current title race has been finely balanced with both Manchester City and Chelsea maintaining their unbeaten runs. It would take some performance from the opposition to end that and that's what Birmingham did.

The two had faced each other just a few days before this match in the FA Cup. Manchester City won 3-1 in extra time that day and also the same result in the league in October 2017. The Blues exacted revenge for both these with a 2-0 win.

Ellen White clinically pounced on a defensive mix up to put them ahead and was also the scorer of the second, tapping in the goal as assisted by Emma Follis.

More positive news and something to celebrate on the night was one of the Sky Blues' players becoming a centurion for the club. Steph Houghton had the honour not long ago but it was Jill Scott's turn this time reaching 100 appearances for City in this match.

Despite currently being in 6th place at the moment, Reading are a team to watch out for and shouldn't be underestimated by anyone. They showed just why with a dominant 4-0 win against Bristol City.

Bristol held off til the half hour mark before conceding. Kirsty Pearce slotting home from Sophie Baggaley's save. Fara Williams added a couple of goals in the second half with both identical efforts from 25 yards out. Brooke Chaplen also got on the scoresheet for the Royals in between the two screamers.

Chelsea had previously been free scoring in the matches between these two. The most recent was the 8-0 win in the Conti Cup in December. Yeovil showed just how much they have progressed with a much lower scoreline this time around.

Chelsea were left frustrated going into half time with no breakthrough. It took til about an hour in before a goal was scored. Fran Kirby, who is in great goalscoring form, broke the deadlock just moments after being subbed on with only her second touch.

Jonna Andersson put the Blues 2-0 up just a few minutes later and that was all the goals in this match. With Manchester City losing, Chelsea went top by 1 point and this Saturday's match against the Sky Blues looks to be a possible season defining match.

Chelsea could afford to draw as previously done but a win would see their lead extend to 4 points and add a bit more to their goal difference which could be crucial.

Arsenal looked to try and push into 3rd place in this match whilst facing a tough Everton side who have performed well this season. Everton held on quite well but Arsenal took the lead not long before half time with Beth Mead making the difference for the Gunners.

In the second half, Everton tried their best to get back into the match. They thought they'd equalised when Courtney Sweetman-Kirk scored but the linesman had flagged and it was disallowed. Arsenal didn't manage to add to their tally after Lizzie Durack made a great save from a Danielle Carter effort.

However, they managed to hold on for 3 crucial points. They will look to keep pressure on the top 2 in the league but have a Conti Cup final to look forward to against current holders Manchester City first. 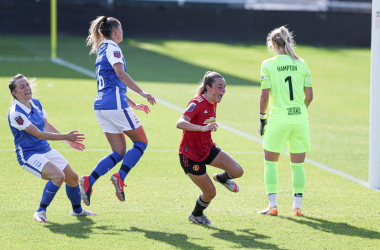 Aston Villa vs Reading Women's Super League Preview: How to watch, predicted line ups, and ones to watch11 hours ago

Brighton & Hove Albion vs Manchester City Women's Super League preview: team news, predicted line-ups, ones to watch and how to watch11 hours ago

The Warm Down: West Ham cruise past high flying Durham to progress into the Continental Cup semi-finals 17 hours ago

Tottenham Hotspur vs. Everton Women's Super League preview: How to watch, kick-off time, team news, predicted line-ups and ones to watch17 hours ago

Chelsea vs. Manchester City Continental Tyres League Cup Preview: How to watch, kick-off time, team news, predicted line-ups, ones to watch and how to watch3 days ago

Birmingham City vs. Everton Women's Super League: How to watch, kick-off time, team news, predicted line-ups and ones to watch4 days ago