With 20 games remaining of the Premier League season, Rayan Ait-Nouri will be desperate to impress as his Wolverhampton Wanderers future will be decided.

Ait-Nouri is currently on loan from Angers SCO and has started the side's previous four games in all competitions.

The 19-year-old has made 10 appearances in the Gold and Black strip, scoring in his league debut in the 2-0 victory over Crystal Palace in October with a neat finish past Vicente Guaita.

With Jonny Castro and Marcal sidelined, the left-back position in Nuno Espirito Santo's side is vacant for the Frenchman to make his own in the second half of the season.

In Wolves' previous game with Everton, Ait-Nouri showed his attacking prowess with an inch-perfect cross for Ruben Neves to volley the ball home.

But with five months remaining, will Ait-Nouri be purchased on a permanent deal?

Last season, Jonny missed only three league games before suffering a knee injury that has seen him miss the start of the current campaign.

The club announced that the Spaniard was 'making great progress' and there is 'hope to be able to introduce him into team training soon'. In the meantime, Ait-Nouri is the first choice at left-back and has a brilliant chance to cement his place at the club.

When deployed as a left wing-back, with three central defenders behind him, Ait-Nouri spends the majority of the game on the halfway line, finding himself in the opposition half than his own. 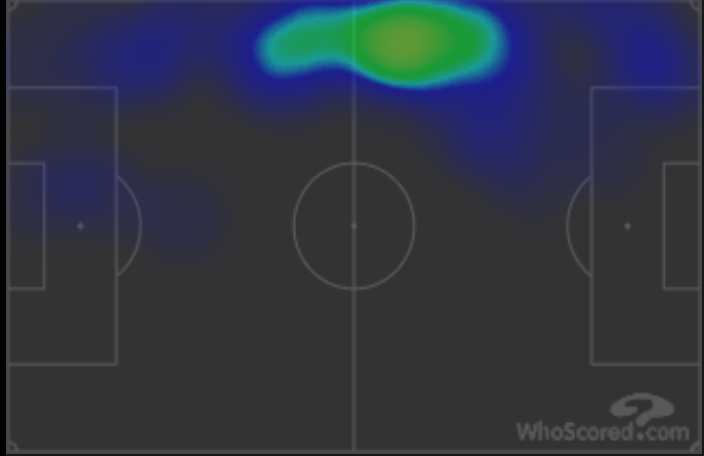 Above is his heatmap on his debut against Palace, where he played on the left in front of a back three of Willy Boly, Conor Coady and Max Kilman.

His pace and nature to venture forward has filled the hole left recently by the injury to Daniel Podence. Against Everton, Ait-Nouri was the Wanderers' main outlet down the left, with Espirito Santo lining his side up in a 4-3-1-2 formation.

Completing 30.44 passes per match, the teenager's performance's have received mixed feedback from supporters, with his positioning when on the back of a counter-attack has been questioned.

Majority of the time, he will have a winger ahead of him (either Pedro Neto or Podence) and there aren't many times when the ball comes from the left leading to a goal.

However, when Wolves do give-up possession and are forced to re-group, Ait-Nouri's attendance further up the pitch can sometimes open up an opportunity for space for the opposing right winger.

Ait-Nouri spoke about how proud he was to join the club, claiming he was 'thrilled to be joining this club' in October. With Marcal also arriving in the same transfer market, it seemed Ait-Nouri would compete with the Brazilian.

However, Marcal has missed six games due to injury, being substituted in the Manchester City fixture. After playing 75 minutes of the 1-1 draw with Tottenham Hotspur in December, before being replaced due to an injury, the former-Lyon defender has been absent for the previous three fixtures.

As an attacking full-back, one element of his game that Ait-Nouri must improve on is his goal contribution. When looking at the assists chart for defenders, he sits four behind Everton's Lucas Digne and Liverpool's Andrew Robertson with only the one.

Credit, these two quality full-backs play for top-sides, but Wolves have used their wing-backs as an outlet for attack since their promotion in 2018 and with Nelson Semedo not hitting the numbers that Matt Doherty did, Ait-Nouri must improve.

One area of his game that could see an improvement in his assists tally is his crossing. With only 21 crosses, only 19% of them have been successful.

The absence of Raul Jimenez does eliminate the temptation of whipping the ball in knowing the Mexican will reach the ball. With Fabio Silva struggling with confidence and Patrick Cutrone recently back from his loan at Fiorentina, there is little reasoning to deliver crosses.

Ait-Nouri has also been dispossessed the fourth most time between the defenders (10 times), level with Sergio Reguilon and Antonee Robinson. This does show evidence of him wanting to run with the ball, but his ball-carrying must improve if Wolves are to make his move permanent.

Defensively, Ait-Nouri's statistics do him justice. In nine appearances in the Premier League, he has completed 67% of his tackles, made six interceptions, nine clearances and, despite being only five foot 10 inches, made five-headed clearances with 21 aerial successful battle.s

However, one alarming statistic is his duel battles. Despite winning 33, one more than Marcal, he has lost 43 altogether.

Obviously, as a young player, his defensive positioning and awareness will improve in time, but his consistency within his defensive battles will certainly be an area he will want to improve.

Right now, it is hard to really tell. It's the best of both worlds situation for Ait-Nouri and the club. With Jonny out, Ait-Nouri is required in the line-up, providing him with an opportunity to display his worth.

Wolves' 11-game run without a clean sheet is becoming a common problem within the club staff, with the idea of Espirito Santo switching back to a back three seeming more tempting.

Against side's such as West Bromwich Albion and Crystal Palace, Ait-Nouri must show his attacking qualities when going forward whilst also demonstrating his understanding as a defender.

But when faced against the Liverpool's and Manchester United's, Ait-Nouri will be instructed to defend more and use his pace to catch teams on the break.

Jonny will be 27 in March, allowing the two to work together in the future to see Ait-Nouri potentially replace Lucas Hernandez and Digne as the French national team's left-back going forward.

What is next for Wolves' Adama Traore? 2 months ago

Wolves 0-1 Liverpool: Origi lifts Reds to the top of the league 2 months ago

Norwich City vs Wolverhampton Wanderers Preview: How to watch, kick off time, team news, predicted line ups and players to watch 2 months ago

Wolves must be at their best to defeat Norwich, insists Bruno Lage 2 months ago