Things were looking up for Southampton after managing to turn a corner after ‘that’ game against Leicester City in October 2019. Ralph Hasenhuttl has single handedly engineered and blossomed Saints into a force within the Premier League. Hasenhuttl has managed a job that seemed impossible on the back end of 2019 with odds stacked up against him.

The Austrian mastermind isn’t perfect, he’s got a few things wrong but with this came a learning curve for the manager after long hours of analysis in the ‘black box’. Hasenhuttl is a manager that doesn’t leave any stones unturned, and that depth of analysis has become a catalyst in the up-turn of form in 2020.

Hasenhuttl scrapped the 5-3-2 formation and instilled a philosophy he knew very well from his days at RB Leipzig in Germany. It’s fair to say, this change has significantly reaped the rewards, leading to a drastic upward spiral. The manager’s gengenpressing, showcased similar qualities to Premier League counterpart, Jurgen Klopp at Liverpool. This change to the 4-2-2-2 formation has helped Hasenhuttl develop his side from relegation candidates to arguably a top 10 side in the space of two years, achieving to place fifth in the 2020 form table.

To the contrary, Southampton have suffered a significant dip in form in the past two and a half months. Southampton have fallen victim of five consecutive defeats in the Premier League, a joint-record for the Saints with all hope for a Europa League spot diminishing in thin air. However, what Hasenhuttl has achieved at Southampton cannot be overshadowed by recent results. It's not the first time he has endured a horrid spell, Saints have to back him.

Where do the problems lie?

Southampton have vastly improved their defensive record this season, managing to keep eight clean sheets. The acquisition of Kyle Walker-Peters and a rejuvenated Jannick Vestergaard have been an influential factor in subduing Southampton’s defensive woes.

However, the results of late will suggest anything but. Within the last two matches, Saints have shipped a worrying 12 goals. The nine conceded at Old Trafford became another gut-wrenching night for the Southampton faithful, but given the context of how the game went, there was somewhat an understanding of the result. Arguably, the defeat to Newcastle cut deeper, as there was a sense of anticipation for a response on the back of a heavy defeat. Come five o’clock, the problem seemed worse than first anticipated after another wretched display at St. James’ Park.

The absence of Walker-Peters proved to be a significant miss, forcing Jack Stephens to play in a makeshift right-back role, who can be described as a risk-averse player, prone to lapses in concentration. Newcastle perceived this as a clear weakness in Southampton’s backline and exploited it via the electric Frenchman Allan-Saint Maximin, who produced two assists. 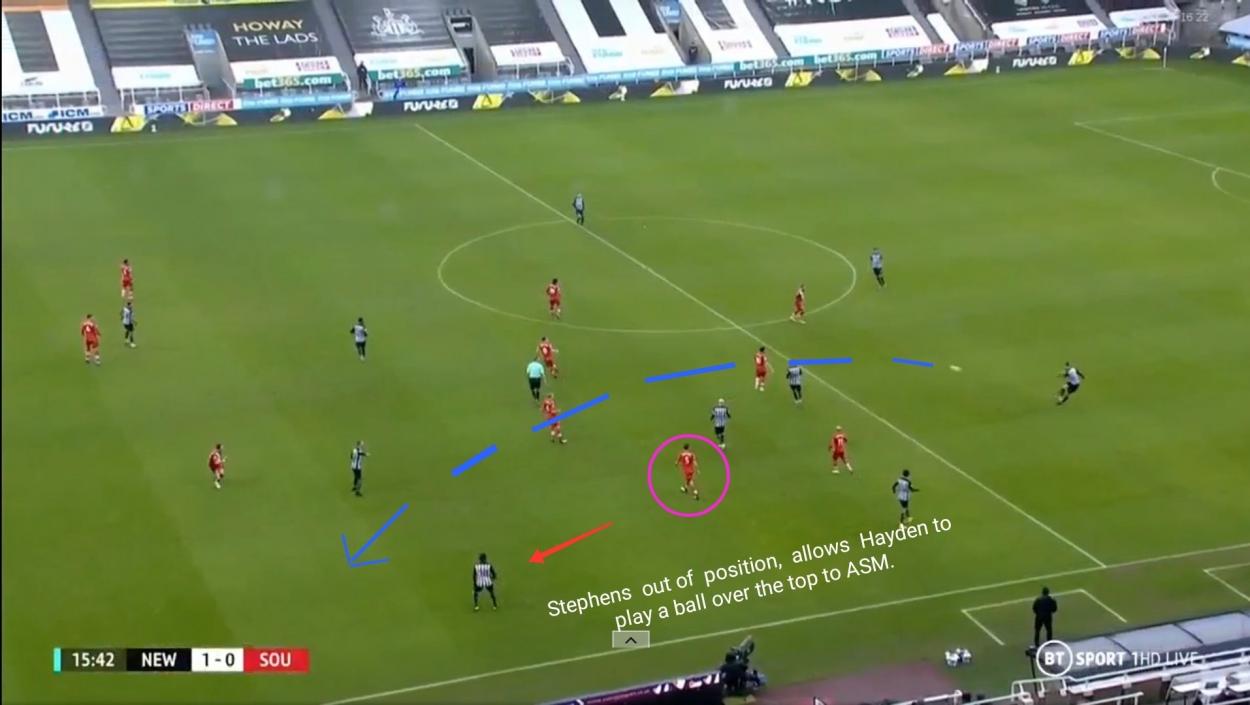 Stephens has been drawn completely out of position. The long ball is directed towards Saint-Maximin, forcing Jan Bednarek to fill in the missing right-back slot. This completely disrupts the shape of the defensive line as Southampton are left with only one covering Centre-back. Saint-Maximin is able to skip past Bednarek and run into the open space, cutting the ball back to an unmarked Joe Willock who taps home to put Newcastle in front.

The Polish international, Bednarek has been the constant in the Southampton backline, becoming the mainstay. However, he had another day to forget with Miguel Almiron’s shot deflecting off the foot of the Southampton defender, completely wrong-footing Alex McCarthy between the sticks.

The third goal epitomises the defensive frailties of late with McCarthy falling victim to a poor pass out to Ryan Bertrand who had his pockets picked by the lively Almiron, putting the game out of Southampton’s reach just before the interval.

Hasenhuttl will need to put long hours on the training ground to find a solution to the problems at the back. On the bright side, the South coast side will be boosted with the return of their key man Walker-Peters in the coming week to aid their defensive woes.

Hasenhuttl expressed his frustrations with the defence:

“The way we concede goals at the moment is far too easy, it’s not the way you can defend in the Premier League.”

“We must find quick the way back to better defending; if we don't do this then it's very tough to win games. In the second half, we had a few good moments, but I must say after being two men up it was not good enough. We didn't create enough chances.”

Problems in the final third

Southampton have not had the rub of the green recently, with Ings’ equaliser controversially ruled out by a hair against Aston Villa and Che Adams experiencing the same fate against Manchester United.

Despite the misfortunes, it doesn’t excuse the fact that Takumi Minamino’s goal was the first goal scored in open play since Theo Walcott’s strike against Arsenal on the 16th of December. The lack of fluidity in the final third has not been apparent in the past two and a half months. Southampton have always struggled to break teams down with players behind the ball and Saturday was no different. Even with a two-man advantage, Hasenhuttl’s side failed to make any further dent on Karl Darlow’s goal worth of note after James Ward-Prowse’s free-kick other than Ings hitting the post.

As seen so often this season, the end product was nothing but awful. Crosses were put in aimlessly with no reward. No one could produce a defence cutting pass to bypass Steve Bruce’s nine men. The lack of confidence may have had a part to play, which was apparent with the low level of risk the players were willing to take.

“The pitch was deep and we're trying to create chances, but even so we have to have better counter-pressing. The crosses were horrible, always on the ground and not in the air when we have players like Jannik in the box. All in all, not good enough.”

With recent results, it makes you ponder, if Southampton were in Newcastle’s shoes it would seem unlikely for Saints to hang on as Newcastle did. This questions the mentality of the team. Hasenhuttl seemed to hint at this too:

"It's a long season. This is a bad spell. To be consistent over 38 games, that is the difference between a good team and a team that wants to be good.”

Southampton supporters have also grown in frustration over a lack of a ‘Plan B’. A lacklustre display was showcased throughout the entire 90 minutes, failing to significantly test Darlow in the goal. Despite this, only one change was made out of a possible three. Southampton had run out of ideas in the final third, making it all too easy for the Newcastle backline to defend.

Hasenhuttl has to evaluate and pinpoint exactly what is going wrong with the aim to bounce back like before.

How Hasenhuttl can turn Southampton around

Hasenhuttl on how to turn Southampton’s form around:

“Quickly find the reset button and find the behaviours we have shown at the beginning of the season. [Today] every chance was a goal, and this is too easy.”

There’s no doubt Hasenhuttl can get this team back on track after derailing in the past few months. The manager is in need of reigniting the spark that was ever-present at the start of the season.

The boost of January acquisition Minamino should play a part in the surge to turn things around on the south coast. Talk about instant impact, Minamino netted just 30 minutes into his debut. The Japanese international will bring the creative spark that Southampton have been craving as well as that bit of quality in the final third as seen on Saturday with a beautifully taken finish. He seems to have fitted in seamlessly since his arrival from Liverpool, fitting into Hasenhuttl’s system to a tee.

Saints skipper, Ward-Prowse has had a growing influence in the team, displaying more composure and responsibility this season, providing five goals and five assists. The England international has been ever-present in the Southampton midfield and will look to push through and come out of this turgid spell. The ability the skipper attains from dead-ball situations is a huge advantage to any side and will hope to use it to affect in the coming months.

The return of Stuart Armstrong and Walker-Peters will also come as a huge boost in recovering their form with both playing an integral part in their early-season success.

The Premier League season is a marathon, not a sprint, as quoted by manager Hasenhuttl. All hope is not lost with plenty of time to rediscover some form. With confidence clearly a significant factor to Southampton’s success, Hasenhuttl will aim to adapt and tweak a few changes in the hope of picking up results in the second half of the season and gain momentum prior to a host of tricky games in the next few months.

Southampton 1-2 Wolverhampton Wanderers: Wolves come from behind to condemn sorry Saints 12 days ago

Wolverhampton Wanderers vs Southampton preview: Both sides look to extend their FA Cup run&nbsp; 16 days ago

Newcastle United vs Southampton Preview: Both sides will seek to bounce back from defeats 22 days ago

Why Minamino fits Hasenhuttl's system to a tee 25 days ago

Hasenhuttl: 'I hope the physios do a good job' 25 days ago