Arsenal picked up their first three points of the Premier League season, beating Norwich 1-0 in front of a packed Emirates Stadium. A second half goal from captain Pierre Emerick-Aubameyang ensured the win on an ideal day for Mikel Arteta’s side.

With a number of players returning from injury, the Gunners’ starting lineup reflected perhaps the closest thing we have seen to the enigmatic “Arteta’s Arsenal”.

It was the first time that Arsenal fans were treated to their “strongest back four”, with Kieran Tierney, Gabriel, Ben White and debutant Takehiro Tomiyasu being given the nod for the afternoon – and what better way to start than with a clean sheet?

New-boy Albert Sambi Lokonga once again looked sharp at the base of midfield with Ainsley Maitland-Niles. Linking the defence to attack in his typical comfortable style, the Belgian is already looking to be a really smart buy for the north London side.

Both sides came flying out of the blocks with plenty of endeavour, with a number of chances created in the opening 20 minutes of the game. Aubameyang went close early on with a cheeky attempt to catch Tim Krul napping as he latched onto a well-timed ball from Tierney, but saw his shot miss the target.

It was reassuring to see the attacking impetus of the captain throughout the game, having had such an inconsistent period last term – it will be interesting to see if he can maintain this level of performance while Arsenal attempt to turn their season around.

Arsenal’s latest signing Tomiyasu impressed the home fans with an overall solid display, highlighted by an acrobatic volley that flashed just inches over the bar in the first half. Arteta will be looking for the Japanese defender to build on his positive debut as he settles into this new-look Arsenal side.

Nicolas Pepe looked in effervescent form as he continues to settle into the first team at the Emirates, the Ivorian would have had a goal to his name if it were not for Brandon Williams, who fantastically blocked a close-range attempt early in the second half.

The returning Thomas Partey made an impact off the bench, finding Bukayo Saka with a line-breaking pass in the lead up to the winning goal.

The goal itself was scrappy in its nature to say the least, as a strike from Pepe was flicked onto the post by Krul, followed up again by Pepe, to be blocked by Brandon Williams into the path of Aubameyang, for him to easily tap in.

The Gunners fans will be feeling re-invigorated, having had such a poor start to the Premier League season – they will be hoping that today’s victory will be a sign of things to come, rather than just a flash in the pan.

Arsenal’s injury record has been awful of late, but it is so important for the senior members of the squad such as Partey and Aubameyang to remain fit throughout the season to give the north London side the best fighting chance of achieving any sort of success. 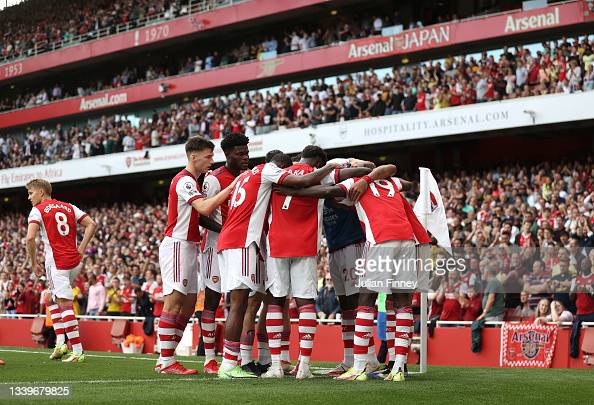 With the first win under their belts, Arteta’s side will be feeling confident as they head into their next few fixtures. Next Saturday, the Gunners take the trip northwest to face Sean Dyche’s Burnley, a fixture that has proved tough over recent years – however with some wind being picked up in the Arsenal sail, the squad will feel as if it isn’t as much of a mountain to climb as it would have been, had they not taken all three points home today.

The Gunners then face AFC Wimbledon midweek in the Carabao Cup, before the first North London Derby of the Premier League season at the Emirates on the following Sunday. Arteta and his side will see the next two fixtures as a springboard to fully prepare them to host Tottenham, which will be undoubtedly the most important game of the season so far.

Today’s game was a step in the right direction for Arsenal, an important three points in a time of real struggle. But, as the manager continues to attest, the Gunners will be taking each game as it comes in order to build on their torrid start to the season.

The Warmdown: Arsenal back to winning ways against Newcastle 7 days ago

Why Arsenal's loss to Liverpool isn't the end of the world. 11 days ago

The Warmdown: Arsenal's unbeaten run comes to an end at Anfield 13 days ago

Liverpool vs Arsenal preview: How to watch, kick-off time, team news, predicted lineup and ones to watch 15 days ago

The Warmdown: Gunners make it 10 unbeaten with a win over Watford a month ago

Arsenal vs Watford preview: How to watch, kick-off time, team news, predicted lineup and ones to watch a month ago

Charlie Patino on what Arsenal means to him, Jack Wilshere’s return and becoming an inspirational figure a month ago

Leicester City vs Arsenal preview: How to watch, kick-off time, team news, predicted lineups and ones to watch a month ago

Arsenal vs Aston Villa preview: How to watch, kick-off time, team news, predicted lineups and ones to watch a month ago

Charlie Patino turns 18: What can we expect from the Arsenal youngster in the future? 2 months ago
//