Conor Chaplin scored twice as Ipswich Town professionally saw off non-league Buxton 4-0 to book their place in the third round of the FA Cup.

Chaplin’s two goals were added to Gassan Ahadme and Kayden Jackson as the former winners condemned a fourth straight defeat on their National League North visitors, who held their own in front of 580 of their travelling supporters.

The League One side claimed their first home win in the competition in 10 matches, a run stretching back to when they beat Chesterfield in 2009.

The draw for the third round, which will see Premier League and Championship sides enter the competition, will be held on Monday evening.

Ipswich boss Kieran McKenna, in light of a depleted squad due to injuries, went stronger than perhaps expected with seven changes from the midweek defeat to Portsmouth in the Papa John’s Trophy.

Christian Walton returned in goal and Ahadme was handed his first start since his deadline day move from Burton Albion.

Buxton boss Jamie Vermiglio, who made history by guiding Chorley to the fourth round two years ago, made five changes to his side that were defeated in the FA Trophy last weekend.

Goalkeeper Theo Richardson returned to the side while Harry Bunn and Scott Boden were both left on the substitutes bench.

Teenager Max Conway, who signed on loan from Bolton Wanderers in the week, came straight in for his Bucks debut.

Following a minute’s applause in tribute to former Ipswich striker David Johnson, who died earlier this week at the age of 71, the game got underway.

Chaplin followed that up by firing at Richardson from the edge of the area after a loose ball fell to the former Barnsley man.

But Buxton, who were wearing a special one-off white shirt for this game, almost caught Ipswich napping soon after. Jack McKay charged down an uncontested ball and delivered into the box looking for a teammate.

A loose header from Morsy then allowed Sean Newton to shoot, but Walton held comfortably.

Ipswich were looking to carve out opportunities from wide areas. Burns again saw a handful of crosses turned away by a combination of Richardson and Bucks defenders.

Ahadme was next to threaten, attacking two corners in quick succession, with the latter bouncing just wide after the Moroccan had found some space in the penalty area.

It was not just crosses from the right, Leif Davis was soon getting in on the act with a delivery from the left that was met by Chaplin and deflected behind.

Chaplin nearly saw a free-kick from 25 yards deflect through for an opener. Richardson could only fumble the ball after the strike hit the wall, but recovered quickly enough before the onrushing Cameron Burgess could get there.

Morsy and Vincent-Young were next to try their luck at swinging the ball into the box. Humphreys got on the end of one and went down under the challenge of Jake Moult, but referee Ross Joyce was unmoved.

The youngster then went as close as anyone, when his curling effort from the edge of the box clipped the crossbar on its way over after Keogh had an effort blocked of his own.

But Town finally made the breakthrough on 33 minutes through Chaplin and the source was unsurprisingly a cross from Burns. This one was grounded, and Chaplin took one touch before finishing into the bottom corner for his first goal in 13 matches.

The Tractor Boys doubled their lead just five minutes later. Chaplin was involved again and played in Kyle Edwards down the left. His ball across the face of goal was turned in by Ahadme for his first goal in Ipswich colours.

It could have been three minutes later, when Edwards robbed Thomas Elliott in his own penalty area before handball appeals were waved away from the resultant cross.

Ahadme, Burgess and Chaplin were all to have further headed efforts on the Buxton goal before the interval, which saw the hosts go in two goals to the good.

Tawanda Chirewa, a half-time substitute, was first to sting the palms of Richardson in the second period. He picked up a loose ball 25 yards from goal and his strike needed to be dealt with by the Buxton shot-stopper.

With the game now being played in torrential rain, the Blues hit the post through Ahadme, when his header from Burns’ cross cannoned off the foot of the upright.

Shaun Brisley, who has 354 Football League appearances under his belt, headed wide in a rare chance for the visitors. However, the offside flag was up in any case.

Edwards acrobatically fired over with his back to goal while under pressure from Declan Poole after he was picked out in the box by Luke Woolfenden.

Woolfenden’s eyes lit up when the ball dropped to the centre-back, who appeared to be playing in midfield, 20 yards from goal. His volley, though, was scuffed wide.

Town added a third on 73 minutes. Chaplin picked up the loose ball after it was only half-cleared and struck a blistering effort into the top corner, leaving Richardson unmoved to take his tally to eight for the season.

As the game entered the final 15 minutes, Buxton had their best chance of the contest. Conway knocked the ball past Keogh and then goalkeeper Walton before Albie Armin was alert to the danger in the six-yard box. Bunn then saw his shot deflect wide.

Matt Ward replaced the hard-working Ahadme for the final eight minutes for his Town debut.

Edwards’ deep cross late in the proceedings was met by Chaplin, who was chasing a hat-trick, but could only guide it into the gloves of Richardson.

Jackson, who had been relatively quiet, robbed Newton of possession inside his own half and raced away to slot home Ipswich’s fourth in stoppage time for his third of the season.

The Blues will host Fleetwood Town in league action on Friday while the Bucks will host Bradford Park Avenue on Saturday.

Today’s Player of the Match is Ipswich’s Conor Chaplin.

The Town attacker was required to start in light of a stretched squad due to injury and his quality showed from minute one.

In addition to his two goals, the second of which was excellently taken, he won a handful of headers and was often the source for Ipswich attacks, of which there were many.

He takes his tally to eight for the season and ended a run without scoring that stretched to mid-September.

What can Leicester expect from their new Brazilian winger Tetê? an hour ago 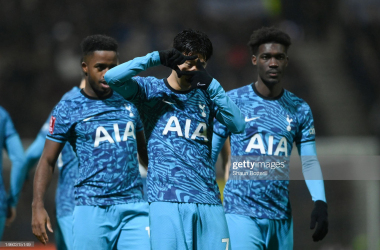