Torquay United unearthed a crucial result in their survival quest, moving off bottom spot by inflicting a rare home defeat upon a Dagenham side that struck the woodwork four times amid sustained dominance that somehow came to no avail on a frustrating day in East London.

Young midfielder Will Goodwin bundled home the decisive goal in fittingly scrappy fashion towards the end of the first half for what was one of their only box entries in a game almost exclusively contested in the other thereafter.

The Gulls withstood the prolonged siege with ferocious valiance, albeit assisted by some fortunate instances, to provide some gratefully-savoured reward for the 145 travelling fans who made the long journey for an early kick-off.

Torquay's prior five visits to Victoria Road spanning almost a decade had featured a maximum of only one goal and this would be another cagey encounter conforming to that trend.

However, Dagenham may have carved a different destiny that had they taken a first minute lead when Josh Walker fired into the arms of Mark Halstead having taken Omar Mussa's threaded pass on the turn.

That Daryl McMahon's side had gone close within such a quick timeframe was a promising omen, though they would soon discover that this clash would not be anywhere near as straightforward as the league table suggested.

Continuing the end-to-end dynamic, Junior Morias lashed over upon receipt of the ball in space when a partially-cleared corner was recycled to him, before the Jamaican then saw another speculative effort smartly redirected at goal by Myles Weston to force a sharp save.

Torquay then went close themselves as Dillon Da Silva flashed tantalisingly wide from a long ball that was poorly misjudged by Harry Phipps, who subsequently made amends with a vital intervention in the next attack.

Despite being somewhat below their usual intensity, Dagenham had the two biggest opportunities to go into half time ahead, both of which came from corners. Harry Phipps nodded one wide, while another was cannoned against the top of the crossbar by Manny Onariase. 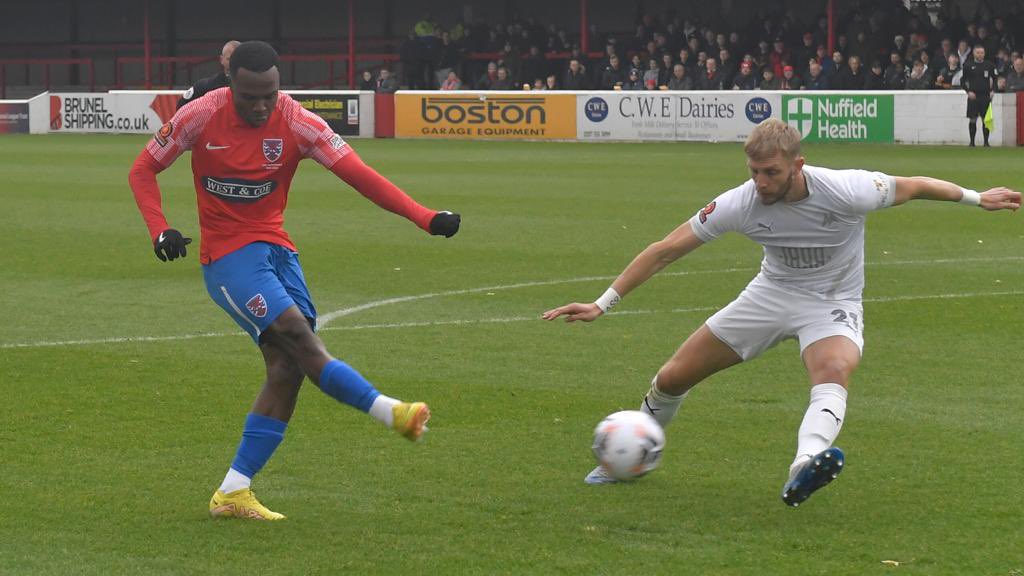 Nonetheless, it was the visitors who took the lead against the run of play in calamitous fashion. A lack of communication between Phipps and Justham in dealing with Dylan Crowe's channel ball to Da Silva led to the latter firing across an empty goal, where hesitance from the covering Onariase allowed Goodwin to scruffily bundle home.

They carried that slender lead into the interval, after which intense pressure would be applied. Dagenham did everything but score, and the first of three more woodwork scrapes immediately saw Walker stab the post after being played through.

On the hour mark came a double substitution in an attempt to inject more energy, as George Saunders and Jay Bird entered the fray, and incredibly both would also strike the post within ten minutes of their introduction.

Saunders, in his first league cameo since recovering from a broken leg injury, made an immediate impact by embarking on constant drives down the right wing and crosses to the far post - one sailing over the keeper and thudding the woodwork.

His fellow substitute Bird suffered the same fate, coming agonisingly close to a second consecutive winner off the bench after Weston's pullback found him in space, but the striker hooked against the upright to compound the feeling that it simply wasn't going to be Daggers' day.

As momentum amplified, they continued to throw everything at the visitors without reward, as nothing dropped for them. Matters were almost made worse, too, when Torquay finally emerged out of their half and launched a counter that saw Evans smash the bar.

Into the latter stages, Saunders fired inches wide while several deliveries were repelled, but Gary Johnson's Gulls ultimately hung on for a monumentally important three points at the expense of a Daggers outfit that couldn't have done much more.

Mark Ellis (Torquay United) | When the news came through that Torquay had extended Ellis' loan from Barrow the day prior to this game, it was met with widespread delight by the fanbase who knew how vital he would be in their survival dogfight. This performance proved it, as the centre half showcased his vast experience to help drag them over the line.