For the second successive season, Wrexham headed to Victoria Road for a potentially defining final day showdown that primarily centred around their promotion permutations, with the added dimension of them being vociferously backed by over 1400 travelling supporters this time.

However, it would rapidly descend into disaster as the Dragons instead became a passive antagonist in Dagenham's play-off sub-plot, though the hosts' phenomenal display would ultimately come in vain as they agonisingly fell a solitary point short due to results elsewhere.

Visiting manager Phil Parkinson reasoned that his side had the stuffing knocked out of them when news filtered around about Stockport County taking the lead in their game against FC Halifax Town 150 miles away, at which point it began evolving into an astonishingly one-sided contest in East London.

The Daggers ought to have gone into the interval ahead but made amends in the second half through goals from prolific trio Junior Morias, Paul McCallum and Matt Robinson. All that was left to complete a perfect day for them was a late Woking winner at Chesterfield, but it never came.

It was a nervous occasion fraught with widespread tension at Victoria Road, where both fanbases would spend considerable time scanning results elsewhere as each needed their team to win and the one directly above to suffer defeat.

Not long into the clash, Wrexham supporters received the dreaded notification that Stockport had opened the scoring against Halifax, thus signifying the first blow in an afternoon that certainly would not go to plan whatsoever.

Dagenham embraced the visible despondence and immediately sought an opportunity to add insult to injury, with Brandon Comley energetically bursting forward into a vacant pocket of space before being denied by a brilliant fingertip save from Dibble.

Fuelled by a superb atmosphere, the Daggers were playing some gorgeous football reminiscent of the season's opening weeks when they were the early pace-setters. Infact, not since the curtain raiser at fellow fancied outfit Stockport have they been so compelling.

Incrementally amplifying the tempo before the break, they completely overwhelmed a Wrexham side that, at times, were unable to advance beyond their own 18-yard box. This culminated in several opportunities, with Morias seeing a shot deflected before Robinson's pass evaded everybody across the area.

Myles Weston and Comley both temporarily got in behind before the danger was hastily snuffed out, while a far-post header from Manny Onariase also crept narrowly wide.

McCallum was twice denied as the half-time whistle loomed, first by the linesman's flag for a contentious foul after heading home when Dibble clumsily lost control of a cross, then shooting at his legs following an intelligent pass from Mauro Vilhete.

Thus concluded a first 45 minutes Dagenham would have been immensely satisfied with, yet they knew the challenge would likely be ramped up thereafter. So it proved, with Justham pulling off a brilliant instinctive stop to repel Palmer's fierce close-range drive within moments of the restart.

Jolted back into life by this letoff, though, the Daggers promptly took the lead at the other end through the division's most in-form man Morias, whose superb goal ratio got even better as he turned an over-committed Max Cleworth magnificently before hammering beyond Dibble. 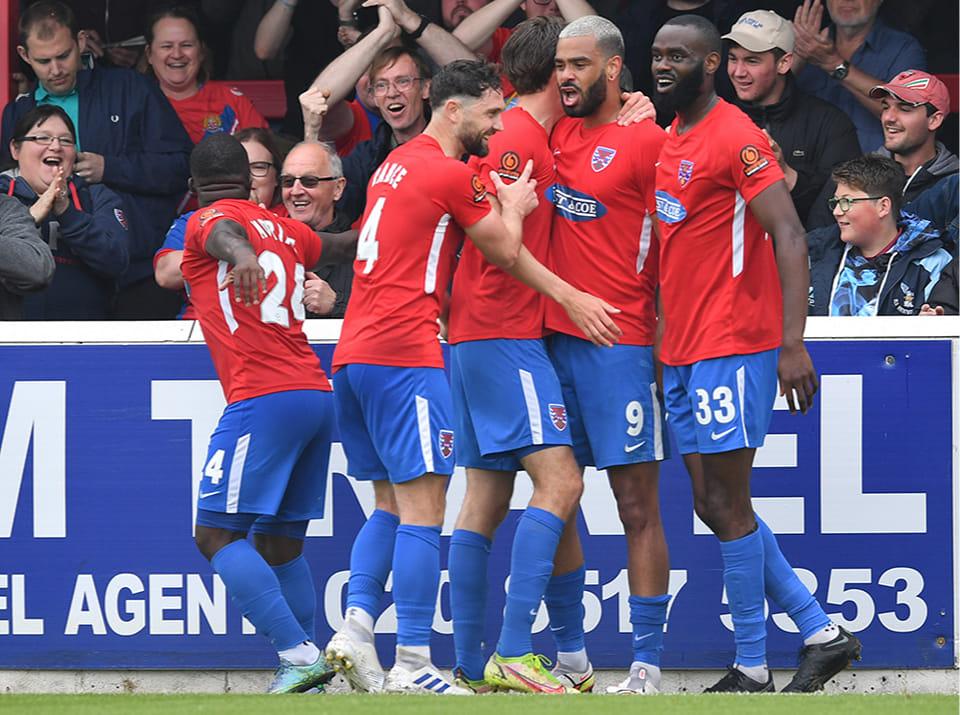 There was no chance of Dagenham sitting back because they were only getting started in an attacking capacity. By this point, Wrexham also knew that Stockport had made it two in their game and consequently crumbled in a manner that has been unlike them.

A Morias goal is invariably followed by one from strike partner McCallum, which almost happened around the hour mark when the number nine met Vilhete's cross. However, after a few half-chances for Wrexham, his moment finally arrived.

It was the type of strike that has forged the basis of his entire career, a bullet far-post header from Weston's precise delivery for his 18th of another productive campaign.

Far from just a scorer he is, though. Ten minutes later, the frontman demonstrated his other attributes by teeing up Robinson to rifle home a fierce half-volley from just inside the area, which sealed an incredible victory albeit undeniably tinged by the fact Woking were unable to triumph at Chesterfield.

Supporters showcased their appreciation towards the team doing everything they would within the admittedly self-inflicted circumstances of needing a severely unlikely series of events. In the end, one point was the difference but they can take solace from the platform that can be built upon from August onwards.

Meanwhile, Wrexham's brilliant travelling contingent still roared their team off despite them not being at the races on this occasion, although will understandably be demanding much better from their upcoming battles.

So both miss out on the hopes with which they entered the fixture, but the feeling afterwards was nonetheless unanimously positive around Victoria Road, where Dagenham will now make initial preparations for the new campaign as Wrexham continue manifesting their fate.

Dagenham's season is officially over as this masterclass came too belatedly to gatecrash the playoffs, where Wrexham conversely occupy the highest echelon and will face either Notts County or Grimsby Town in the semi-final at the Racecourse in a fortnight's time.

Before that, though, comes an FA Trophy final against Bromley under the Wembley arch, which could commence a triumphant period for the Hollywood-owned club.

Paul McCallum (Dagenham & Redbridge) | On an afternoon where he shared a pitch with two other imposing frontmen in Paul Mullin and Ollie Palmer, this man refused to be outshone and delivered a timely reminder that he is also one of the best in the business at this level. His target man attributes were outlined as he powered home Weston's centre to make it 2-0, before displaying exceptional link-up play to set up Robinson in stoppage time.

Mohammed Salah signs new Liverpool contract until 2025 a day ago

Coventry’s Assistant Viveash Extends His Stay a day ago

Solihull Moors Re-Sign Striker Reid On Loan a day ago

The Spanish Women's National Team Euro Squad: The Desire for Success but a Managerial Failure a day ago