On an evening tinged with sorrow, Manchester United’s Europa League campaign started in underwhelming fashion as Erik ten Hag’s team were defeated by Spanish side Real Sociedad. It was a frustrating evening for United, who spurned a handful of reasonable chances before the visitors scored the only goal of the game from the penalty spot in the second half.

Ten Hag had rotated his team and the changes no doubt added to the lacklustre showing. It was a game played against a black backdrop and the defeat spelt the end of United’s four-game winning run. It was a performance that suggested their heart is not quite in this competition.

The penalty which brought Real Sociedad victory was contentious. It appeared that Lisandro Martinez, a second-half substitute, was too close to David Silva for his handball to be illegal, let alone the ball deflected off his thigh and onto the defender’s arm. But that was perhaps United’s comeuppance for squandering their own openings.

The atmosphere prior to kick-off was poignant with the game being overshadowed by the death of Her Majesty, Queen Elizabeth II. United wore black armbands in remembrance and a minute's reflection was observed in memory of her life and service. It naturally subdued Old Trafford’s mood. United said the game went ahead “following direction from the Football Association and Uefa”.

The go-ahead ensured Casemiro was awarded his first start for United since signing from Real Madrid last month, and his partnership with Christian Eriksen in a two-man midfield saw Fred play in a more advanced role. It proved to be a turgid experiment with Bruno Fernandes being sent on after the first half.

Victor Lindelof started his first game of the campaign and Harry Maguire was also brought in for his first start since being dropped after the humiliating defeat to Brentford on 13 August. Yet, it was Cristiano Ronaldo’s inclusion that was most notable. This was his first start in four games and also his first appearance in Europe’s secondary competition since a UEFA Cup play-off in 2002. The subsequent 19 years have all seen Ronaldo grace the Champions League.

Real Sociedad saw more of the ball in the opening 30 minutes but didn’t do too much with it. United fancied their chance on the counter but efforts at Alex Remiro’s goal were at a premium. When United did make headway it was often instigated by Eriksen but missed by Ronaldo.

The forward strained but couldn’t quite reach one of the Dane’s inviting crosses and then when he found the Portuguese star once again, this time on the deck, centre back Jon Pacheco was alert and snatched the ball from under his nose in front of goal.

Overall, it was thin gruel, but when Diogo Dalot delivered for Ronaldo to head goalwards ten minutes before half time, United thought they had broken the deadlock. Remiro got his hand to the ball but couldn’t keep it out, the linesman’s offside flag did, however.

Ten Hag needed to reshuffle, his team weren’t clicking and so a double change came at the break. Fernandes straight away sent a ball for Ronaldo to head but he failed to find the target. Then Ronaldo fired over. Spurning such chances would prove costly for the home team.

The warning of Real Sociedad’s capabilities came when Take Kubo crossed from the left for Alexander Sorloth, who had taken the place of the ineffective Umar Sadiq up front. The substitute missed the target with his header on that occasion, but the same combo of Kubo and Sorloth spelt trouble for United again only for Martinez to poke the ball away to safety just in time.

It was on 57 minutes that Real Sociedad made United pay for spurned openings. Silva fired a shot which struck Martinez from close range, the ball hit the defender's thigh before deflecting onto his arm. Referee Marco Di Bello signalled for a penalty, which VAR confirmed, and Brais Mendez dispatched the spot-kick beyond De Gea’s reach.

United’s angst grew and Ten Hag pulled further from his bench, sending on 18-year-old Alejandro Garnacho for Anthony Elanga and Jadon Sancho for Antony, whose second United appearance had been as quiet as his first had been lively.

It was now about game management for the Spanish side, who have won two of their opening four games in La Liga. They did a good job of it too, but United were hardly all guns blazing. Casemiro fired a low shot which Remiro parried and Ronaldo misplacing his shot from Fernandes’s centre. It was an evening of remembrance, but not of United’s display. It was a black night, a Basque one too.

Player of the match: Brais Mendez

Scorer of the second half penalty that gave Real Sociedad a precious victory and a good start to their attempt to emerge from this Europa League group. The midfielder was influential on the right before he dispatched his spot-kick, which made United pay for their own missed opportunities. 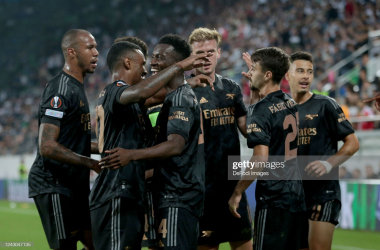