Manchester City have ended their pre-season preparations in style, as goals from Gabriel Jesus, Sergio Agüero and Raheem Sterling gave them a convincing 3-0 victory over West Ham United in Norway.

It only took seven minutes for City to take the lead through Jesus, whilst the rest of the first period could only provide half-chances for either side with Agüero, Jesus and Toni Martínez coming close.

City didn't let up in the second period as Agüero scored in the 56th minute. David Silva had a decent chance before Sterling added a third who had a further opportunity but they had done enough to round off an excellent pre-season. 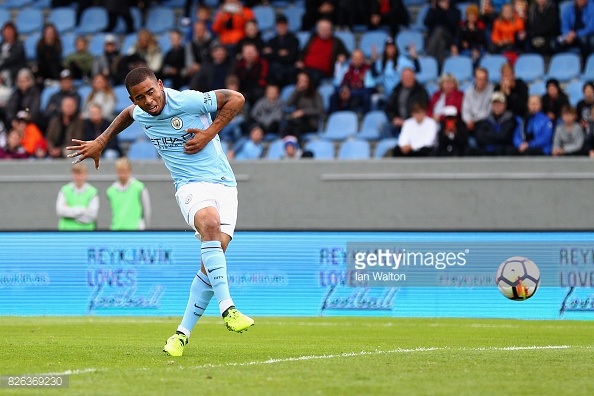 City and West Ham were making history in Reykjavik playing the first all-Premier League clash in the country, and The Citizens didn't look to disappoint their Icelandic fans as they took the lead inside seven minutes.

It was simple from Pep Guardiola's men as Danilo did well to nip in and regain possession to push it towards Kevin De Bruyne. The Belgian continued his excellent pre-season as he threaded it through to Jesus who slotted it through the legs of former team-mate Joe Hart.

Hart looked to impress against his parent club on this rare occasion and was called into action in the 14th minute. The unrecognisable Silva, after shaving his head, did well to play it through to Agüero who was having his own battle with defender Angelo Ogbonna. The Argentine did well despite the pressure and got the shot off at the near post bit Hart did well to put it behind. 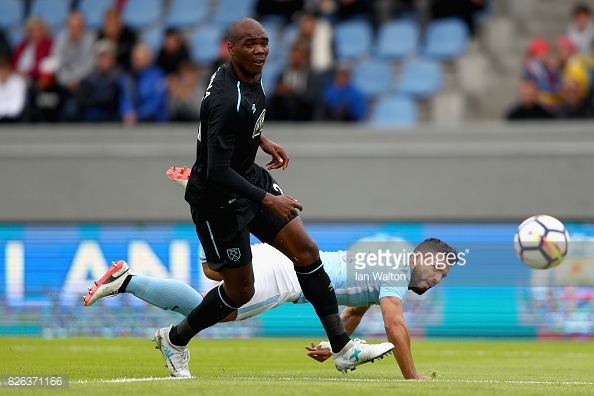 The clash was both sides' final match before the start of the Premier League season next weekend and that showed in the side's play as they looked to avoid overstretching themselves ahead of the campaign. But it didn't mean that both sides weren't looking to win the clash as they both had decent opportunities as the half went on.

It was City who had been dominating and they were at it again in the 21st minute as De Bruyne's long through ball deflected through to Jesus. The Brazilian shrugged Ogbonna off the ball but Hart was calmly down at his feet to block the effort which was eventually cleared.

The Hammers' first chance didn't arrive until the half hour mark, it was a good build-up from Slaven Bilić's side as Pedro Obiang did well to find former City full-back Pablo Zabaleta on the right. Zabaleta's floated ball looked perfect for Martinez who was left unmarked in the area, but the young striker still has some learning to do as his mistimed header was well over the crossbar.

Bilić really looked to test his opposition at the beginning of the second period introducing new star striker Javier Hernández, the Mexican did look dangerous but could do nothing to prevent City doubling their lead before the hour mark.

Hernández made a chance in the 53rd minute as he played the ball over the top for Edmilison Fernandes.  The angle was against the midfielder but did well to force Ederson into his first save of the afternoon.

It was only three minutes later that City added a second and it was once again simple but slick play from The Citizens. Leroy Sané started the move as he sent Silva running down the left. It was a great ball into the middle from the Spaniard, and laid on a plate for Agüero to stick it beyond Hart.

City continued to turn the screw as the period played out, and City weren't holding up in the pursuit of a third. Silva should have made it three in the 64th minute as he was one-on-one with Hart, his effort looked destined for the far corner but Hart did brilliantly to get a minimal touch onto it to see it behind.

However, there is nothing the England international could do to prevent City's third and final goal of the afternoon. Phil Foden's effort inside the area was deflected into the air and luck was not on the side of The Hammers as it fell perfectly for Sterling to hit into the bottom corner.

Sterling could have scored a second just minutes later as Bernardo Silva looked to impress on his debut producing a faint cross in from the byline. Sterling's low header looked good but Hart was there again to save.

West Ham had one final chance for a consolation with ten minutes remaining as Hernández's pressure forced Ederson into a poor clearance. The ball came to Eliaquim Mangala but André Ayew was right onto him and had the ball into the net only for the Ghanaian to be judged to have fouled the defender.

How do Manchester City solve their striker dilemma? 5 days ago

Manchester City 2020/21 Season Review: The Premier League title returns to the Etihad in yet another record-breaking season 2 months ago

The Warm Down: Chelsea outwit Pep's City in Champions League Final 2 months ago

The Warmdown: Friday fiesta for Ferrán as City beat Newcastle in seven-goal thriller 2 months ago

Zinchenko vs PSG: A Ukrainian masterclass 3 months ago

The Warmdown: City say 'Au Revoir' to PSG and 'Bonjour' to their first Champions League final 3 months ago

The Warm Down:&nbsp;Agüero soars as&nbsp;City prey on the Eagles 3 months ago
//