Arsenal beat Chelsea at Wembley for the second time in seven weeks to secure the Community Shield on Sunday. The pre-season fixture had a new Arsenal line-up with five changes from the starting eleven that played against Chelsea in the FA Cup final win in May. So, in a game that Arsene Wenger called “high intensity” how did the Arsenal players fare?

In another game against his old side, Petr Cech had little to do in the first half, aside from a strong save from a Pedro effort that never really troubled him. It would be tough to say that Cech was directly at fault for Chelsea’s opener, which was a calamity of defensive errors from Arsenal, but this probably won’t go down as a vintage performance for the keeper. Cech also failed to save any penalties in the shootout, which was the first in England to use the new “ABBA” system, although he did guess the correct way for Alvaro Morata’s penalty. Rating: 6

Another start at Wembley for the young Englishman results in another win. Again, as with Cech, Rob Holding wasn’t hugely busy throughout the match. An attacking defender by trade, Holding enjoyed getting forward against Chelsea, and this was aided by their lacklustre midfield performance. He also had some joy from set pieces, with only the poor direction on his header preventing his second half attempt from a corner being Arsenal’s equaliser. Holding, however, was partly a fault for Victor Moses’ goal for Chelsea as he and Hector Bellerin failed to track the run of the wing-back. Rating: 6

Per Mertesacker (subbed off 32nd minute)

A difficult performance to judge seeing as the German Arsenal captain only played half an hour before being substituted after a nasty clash with Chelsea defender Gary Cahill. As always, he commanded the defence but his premature exodus from the field means that it is hard to give a clear rating to German. His replacement has a very different tale however. Rating: 6

Not a classic defensive performance at all from Arsenal with, in truth, there being little to do away from set pieces. Reshuffled into the centre of the three-man defence after Per Mertesacker was substituted, Nacho Monreal was able to marshal the defence and, even though he is not traditionally seen as a central defender, did very well in the role. He also converted in the penalty shoot-out, keeping his nerve and slotting past Thibault Courtois. Rating: 7

A good performance from Bellerin down the right-wing from an attacking perspective, getting forward with ease. However, his defensive contribution will come under scrutiny, not for the first time. An early yellow card for a rash tackle on compatriot Marcos Alonso was the first mistake, with the second being his failing to track the run of Moses into the box for the Chelsea opener. His pace was a good presence in the team, such as through his participation in the counter-attacking move that saw Alexandre Lacazette hit the post and especially towards the end of the match when there were clearly tired legs on the field. This was illustrated with his pass for Theo Walcott’s injury time attempt. Rating: 6

A quiet first half for Mohamed Elneny was instantly met with a far busier second half for the Egyptian midfielder. Elneny’s speculative effort fizzled wide just minutes after Chelsea opened the scoring. However, a second effort came closer with his cross-shot being saved by Courtois. His biggest contribution to the game, however, will be winning the free kick that led to Arsenal’s equaliser. After some great work to keep the ball, Elneny came down after a bad two footed challenge from Pedro which saw the Spanish winner sent off and a free kick, which Arsenal scored from, awarded. Rating: 6

Arsenal fans haven’t seen many better performances from Granit Xhaka in red and white than at Wembley on Sunday. The Swiss international dictated the midfield, stretching Chelsea with his range of passing and most importantly providing a great assist for Sead Kolasinac’s equaliser from the free kick.

A clear man of the match performance today, probably only challenged by the Bosnian who he set up to score, Xhaka completed all 98 of the passes that he attempted, illustrating that it may be a season to remember for him at Arsenal. He came close to scoring as well with his effort from around 30 yards drawing a great save from Chelsea’s Belgian goalkeeper. The only negative in his game was his poor clearance from a corner that allowed Chelsea to score the opener, although it’s fair to say that his overall performance more than made up for this mistake. Rating: 9 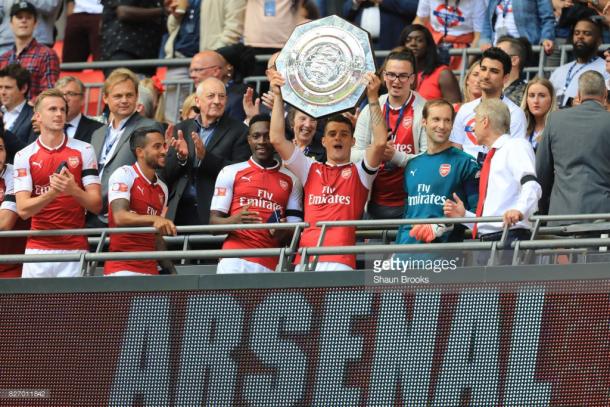 Constantly linked with a move away from Arsenal this transfer window, including to Chelsea, Alex Oxlade-Chamberlain had a bright performance down the left-hand side. The Englishman had a lot of space in the first half, although not so much in the second half, and this meant that Arsenal fans were treated to a good performance from him as a result. His converted penalty however added gloss to his performance. Rating: 7

The second of three players named Alex in the starting line-up, Alex Iwobi played a good sixty-six minutes in the position usually inhabited by one of Alexis Sanchez or Mesut Ozil. His biggest highlight was most probably keeping his composure in the box to get his low shot away in the first half, it was a great piece of footwork but the term a chance that amounts to nothing sums up his performance today. Rating: 6

Like Oxlade-Chamberlain, a relatively good performance from Danny Welbeck at Wembley but not one that will stand out in his career scrapbook. He forced a couple of saves out of Courtois and never really looked uncomfortable playing in a relatively unnatural position for him, as he prefers to play through the middle. Welbeck’s performance although not incredible is a good barometer of the type of season that he could have. Rating: 7

Making his competitive debut for Arsenal, Alex Lacazette looked lively playing through the centre, with a combination of both his pace and hold up play on show. Lacazette was hugely unlucky not to score after hitting the post from a flowing passing move, which he started with some great play on the counter attack. His curling shot beat the defender Cahill and the goalkeeper but just couldn’t beat the post. That was the best moment in a good debut for Lacazette, it was just a shame that Arsenal fans weren’t treated to his penalty prowess in the shootout. Rating: 8

Sead Kolasinac (subbed on for Mertesacker in 33rd minute)

For a substitute to be considered for man of the match in any game, let alone his competitive debut for his new club at Wembley, shows the scale of the performance and Sead Kolasinac had that performance. With his huge stature and imposing physique, he was able to bully the Chelsea attackers, with Michy Batshuayi and Alvaro Morata clearly thrown off their game by the defender.

His great performance culminated in his headed equaliser from Xhaka’s free kick, as on his debut the Bosnian established himself as an Arsenal cult hero. He became the first player since Gilberto Silva to score his first Arsenal goal in the Community Shield, and fans will hope that it is the first of many for the left back, who after arriving on a free transfer from Schalke early in the window already looks like a bargain buy. Rating: 9

Olivier Giroud (subbed on for Lacazette in 66th minute)

Replacing his compatriot Lacazette, Olivier Giroud didn’t produce a huge amount during the twenty-five or so minutes that he played, although his size did create added pressure on the Chelsea defence from set pieces, as seen in the equaliser. His performance will only be remembered for the fact that he scored the winning penalty that secured Arsenal a fifteenth Community Shield. Rating: 6

Theo Walcott (subbed on for Iwobi in 66th minute)

Like Giroud also a successful penalty taker, Theo Walcott had more success in the time that played than the Frenchman, forcing two very good injury time saves out of Courtois. It would have been interesting to see how Walcott would have fared if he had started, but based on the time that he played his performance was not a bad one. Rating: 7

Reiss Nelson (subbed on for Welbeck in 87th minute)

It would be harsh to judge the 17-year-old for what he did in the few minutes that he was on the pitch. Fans and pundits alike would have liked to have seen more of him after he impressed during last weekend’s Emirates Cup win over Benfica. Rating: N/A

Arsenal vs Leicester City preview: Team news, key players and where to watch a day ago

Will this finally be the year Arsenal win the Europa League? 3 days ago