Rosengård travelled up north to Umeå on Saturday. After dominating in the first half, Rosengård finally were rewarded for their hard work just before half time.

After a chaotic situation in the Umeå box, Jelena Cankovic ran free. The Serbian missed her own opportunity, but took care of the second ball and assisted the young Swedish talent Hanna Bennison - who coolly made the score 1-0 to the visitors with her first goal of the season

Rosengård's dominance continued in the second half. The team from Malmö came close several times to extending their lead through Mimmi Larsson, Jelena Cankovic, and Denmark international Sanne Troelsgaard, but it was not until the 81st minute of the game that they managed to make it 2-0. Danish defender Katrine Veje acted fast on a corner kick, where she picked up a failed Umeå clearance and made it 2-0.

The Denmark international was then involved in the third goal five minutes later. After a nice combination out on the left-wing, Veje delivered a cross into Umeå's box, which was met by striker Anna Anvegård perfectly who volleyed the ball into the net making it 3-0.

Linköping only took one point back home in round four after drawing against Piteå, before that, Linköping had won three games in a row. On Sunday, the team from Östergötland picked up another win, after a 1-0 victory at home against Eskilstuna United.

The goal that led to victory came with just over half an hour played, due to weak defending from Eskilstuna and skill from Norweigan midfielder Frida Leonhardsen Maanum.

After a well built-up attack from Linköping,  Leonhardsen Maanum picked up the ball just outside Eskilstuna’s penalty area. When none of the opposition players made an attempt to take the ball, the 21-year-old Norweigan was able to lift the ball into the net behind Eskilstuna goalkeeper Cosette Morché.

The difficulties continue for Vittsjö in the Damallsvenskan. After losing three of the four first games, they lost again at home on Sunday when they hosted Piteå.

The only goal of the game came in the 55th minute when the Brazilian Fernanda Da Silva easily ran through the Vittsjö defence and ended here solo attack by coolly placing the ball behind Vittsjö’s goalkeeper Lynn Shannon.

The first half was goalless, but in the second half, it was the home team Kristianstad who dominated the game against this year’s newcomers in the Damallsvenskan, IK Uppsala. The game ended 2-1.

Goal scorers for Kristianstad were Josefin Harrysson and Jutta Rantala, while IK Uppsala's only goal was scored by Cassandra Korhonen.

On Sunday KIF Örebro hosted Växjö and won the game with 1-0. The only goal of the game came in the second half through Karin Lundin.

Växjö have had a tough start to this year’s campaign and has only one point after five games played. KIF Örebro now has eight points.

Göteborg scored after only two minutes when they hosted Djurgården on Monday in the last game of round 5. Göteborg’s Norweigan international Vilde Böe Risa found Julia Roddar with her cross into Djurgården's penalty area, where Roddar easily headed the ball into the net.

After twenty minutes, Göteborg came close to scoring again. Julia Zigiotti Olme served striker Stina Blackstenius with a free-kick, where Blackstenius ran free from Djurgården’s defence, but she finished just outside the post.

Göteborg continued to dominate the game in the second half and after just over an hour, they extended their lead to 2-0. Zigiotti Olme’s cross made it into Djurgården's box, which Djurgården’s Danish goalkeeper Katherine Östergaard Larsen failed to punch away. Instead, it landed at Roddar’s feet - who scored for the second time of the evening.

Djurgården's biggest chance in the game came in the final minutes when Olivia Schough played a cross into Hanna Ekengren, but she missed completely.

With this win, Göteborg now top the table with same number points as Linköping but a better goal difference. 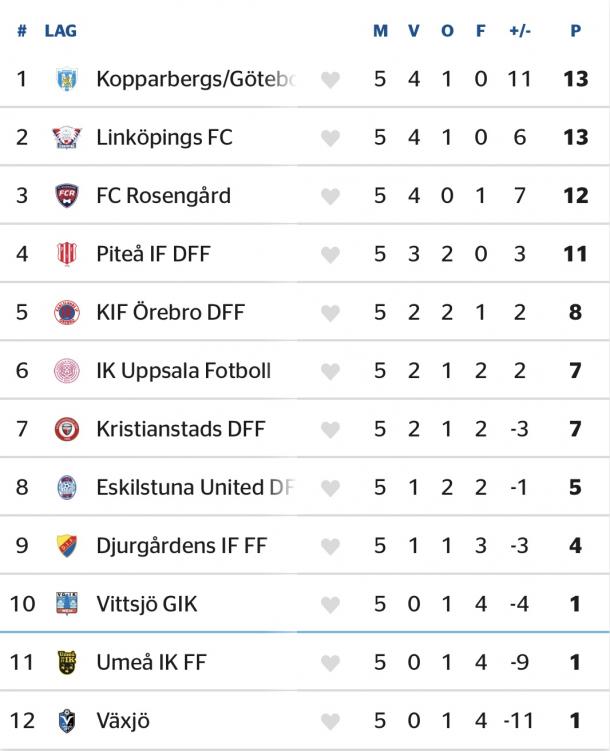 So far so good for Derby County Women 5 months ago
//